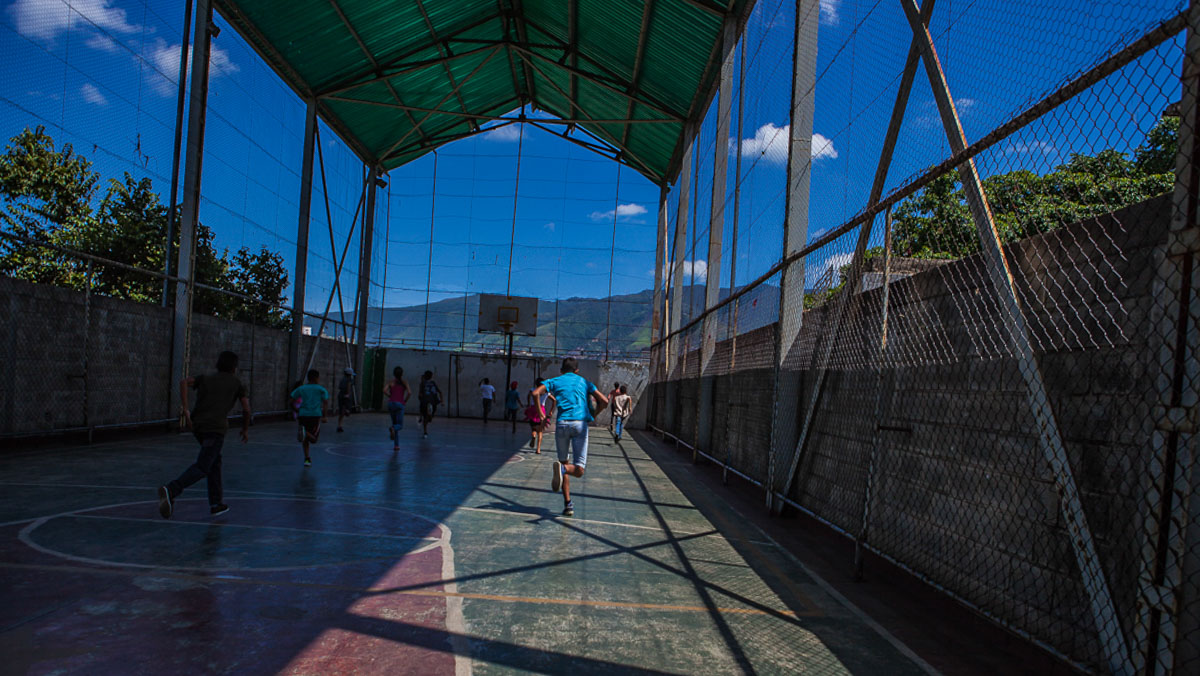 Angel’s holidays are at school

Angel’s parents —he a plumber, she a seamstress—, suffocated by hyperinflation, see how each day their income is not enough to buy food for the family. That’s probably why their 14-year-old teenager son is underweight and has spent his holidays enrolled in a nutritional program at school, located at La Cota 905, in Caracas. 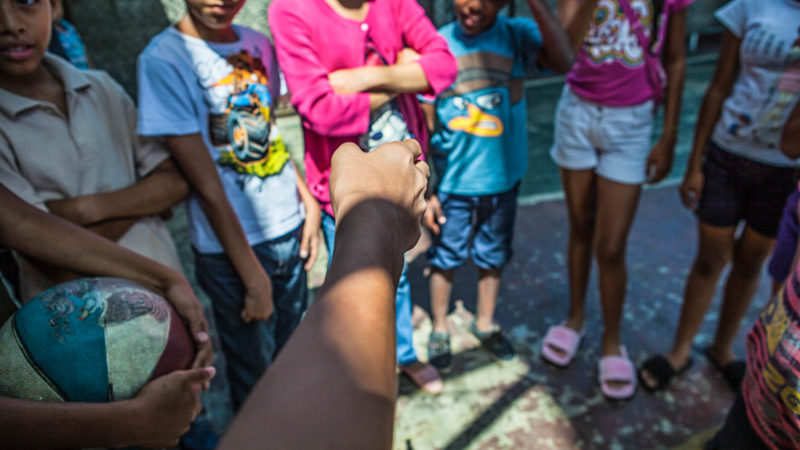 Angel loves going to El Cumbe. In this town of Trujillo state, where his parents were born, he feels free: he goes with his cousins and friends to the river, to the pool or to the many traditional festivities that take place there. He always spends there the Holy Week, Christmas and New Year’s holidays. These are days to share with the family. Especially with the maternal grandmother, the only one he has.

In 2018, however, this childhood tradition was interrupted: Angel lives in Caracas and has not been able to travel to Los Andes during his school holydays. His mother could not get the cash to pay for the ticket.

“I went every day to the bank and they only gave me 100 thousand bolivars, which is now equivalent to 1 sovereign Bolivar. That is nothing! Each ticket cost 2 million 500 thousand bolivars. That is, 250 sovereign bolivars. I was unable to save that amount of money. So, my sister traveled alone, to be with my mom. She paid part of the ticket by bank transfer and another in cash; per seat, the car charged her 10 million bolivars (100 sovereign bolivars). I did not have that much.

Angel is 14 years old and lives with his parents in a neighborhood built on the border of Guzmán Blanco Avenue, known as Cota 905, in western Caracas. A sector fill with garbage, streets covered with potholes through which cars and motorcycles travel.

In these days, he has felt that his daily life has changed. It’s not only he can’t afford to travel for a few weeks. It is also that he used to have biscuits and coffee with milk for snacks, also ate little puddings filled with white cream every eight days, and every weekend they prepared casseroles at home and welcomed family and friends; or he went for a walk with his dad, to buy some clothes. Now everything is different. Snack are sporadic, when it’s available and affordable. Family reunions are only for one-off celebrations: Mother’s Day, Father’s Day, birthday. He cannot remember when was the last time they bought him clothes.

Things have changed so much that he had to go to school during his vacations.

‘The economic situation is not easy. But for other kids is worse,» he says. 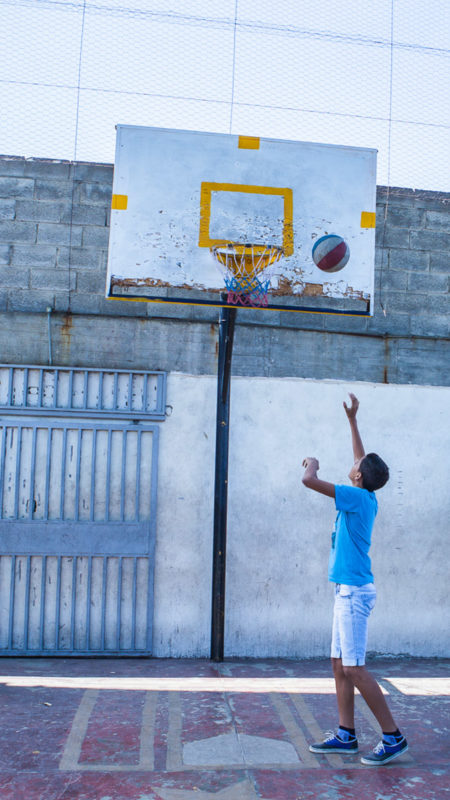 Angel shouts as he holds a ball in his hands and looks at his teammates, all younger than him.

He throws the ball at one of the kids playing with him and then runs away.

It is Monday, September 3 and he is on the field of the Paul VI College, the Catholic educational institution where months ago he finished the 8th grade. But today he is not there to receive classes.

In June, when the school year was about to end, a Venezuelan NGO specialized in childhood visited the campus to examine the 260 children – the neediest of the 1,000 enrolled – who benefit from the canteen, which does not belong to the school, but to the nun’s vicariate. The objective of the evaluation was to diagnose those who were underweight, because during the holidays a nutritional program would be launched to attend them.

Of those 260 students examined, 70 were diagnosed with malnutrition or at risk of suffering it.

They selected 70, and Angel was one of them.

Only 50 are being part of the program because the nuns failed to contact the other 20.

Angel’s mother, who works in the Paul VI as a seamstress and helps with the canteen, says that, at first, the news surprised her.

«I try to feed him properly,» she says.

But she knows that her son’s diagnosis is a consequence of the change of the eating habits at home.

“I really haven’t been able buy meat or chicken for about four months, nor eggs for two months.”

Household income began to shrink, little by little, three years ago. The mother earns a minimum wage, and the father, who works independently as a plumber, does not have a fixed income. So, in the midst of the dizzying hyperinflation that hits the Venezuelan people, the family, with their pockets diminished, see how each day they are uncapable of buying enough food. 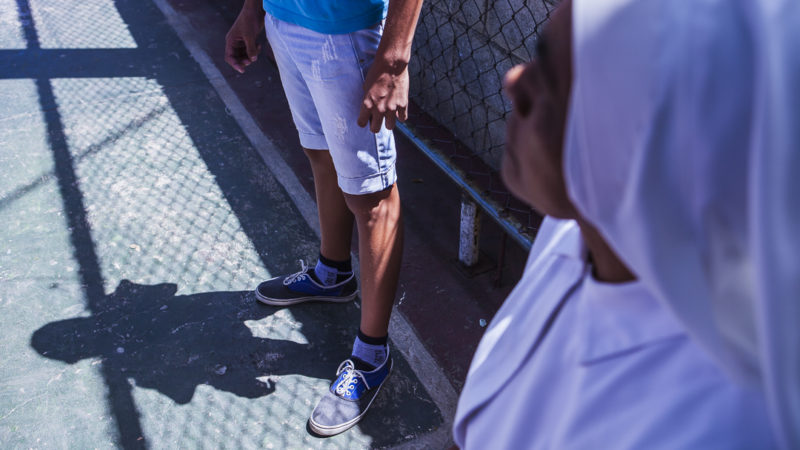 The Paulo VI school is a building protected by beige bars, built around a slope, at the end of one of the streets surrounding the Cota 905. It is 9:30 am and Angel joins the formation at the entrance. He tries to get in the middle of the line, but the others protest: they tell him to go to the end of the line, where he should be because he is the tallest. Then, without saying a word, he moves a few places in the back. Assisted by nutrition program monitors, they walk to one of the classrooms. There they sit at the desks and the people in charge take attendance. Then they give them a food supplement: a brown cream that contains the amount of nutrients they need and which have not been able receive at their homes.

After finishing taking the supplement, the school allows them to play in the court while it is time for lunch. One of the nuns who works at the school watch them in silence. She does not intervene. They decide what games to play. They are free: they are on vacation.

In the dynamic with his peers, Angel’s age seems to give him some leadership. In the group, ages range from 4 to 14 years. The older ones run from one side to the other; while the youngest, those 4-years old, climb the archery that is in one of the corners of the court and swing. At times, they also play with the drinking fountain in the entrance.

One hour goes by.

At 11:20 am, they leave the court and go for lunch. The food cost is covered by the canteen, located a few meters from the school. At the entrance, they are checked in a list. Six rectangular tables cover half of the room. In the other half is the kitchen and there is a woman serving food. The children sit at the small tables, according to their size.

Angel enters last. Exchange a few words with those serving the food, including his mother. And helps to serve: he grabs the aluminum cups and bowls, turns around and delivers it to his mates. He helps for a while before sitting down to eat.

The menu consists of pasta without sauce and tamarind juice. 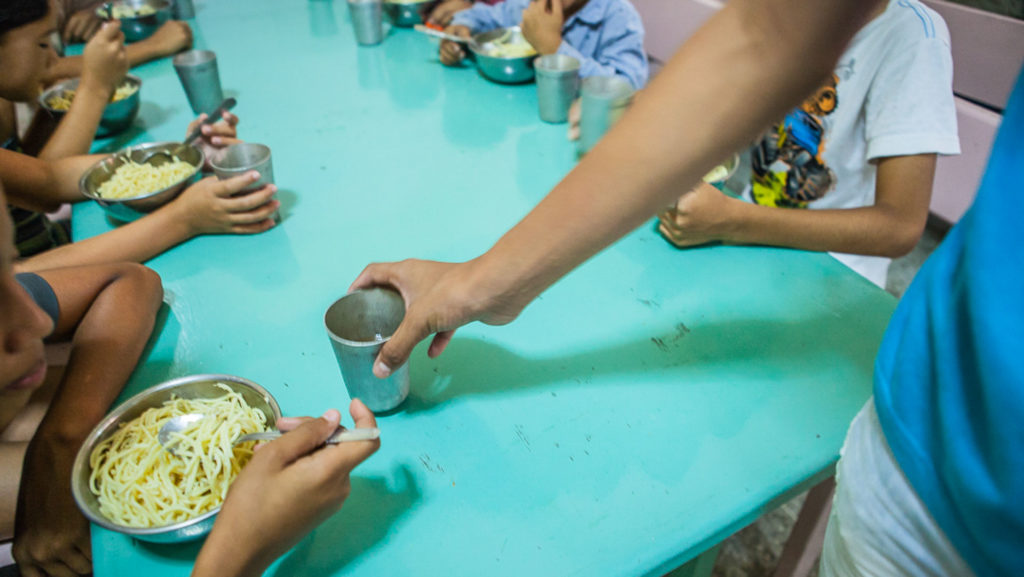 Angel has no siblings and his parents are determined to give him the best. They do everything possible so he does not feel the crisis so much, to compensate for so many shortcomings. To mitigate the impossibility of going to El Cumbe to share with the family, they bought him, on credit, the CPU that was missing from his computer. In the afternoons, he plays with it for hours, football, gun games and driving. His favorite game is one called Euro Truck, which consists of driving big trucks on the motorways of Europe, taking goods from one place to another.

“What he likes the most is that it’s very real.”

On two occasions his mother took him with some friends and other children, to the beach in August. Almost three years ago, he received his last Christmas gift. It was a bicycle. He rides it during the weekends. He goes to the Victoria Avenue – that connects with one of the entrances of the Cota 905-, leveraging of that those days there is little traffic. He rides a long distance to get to the Paseo Los Próceres, one of the places used by the locals to recreate.

Angel is about to start 9th grade; only three years to complete High School. He’s already sure he wants to study accounting.

“I see it difficult, because here technology is not as advanced as in other countries,” he says.

He wants to start classes again. Time has gone slowly, very slowly. However, he hastens to ensure that he has enjoyed some things from these “different” holidays.

“Not everything is bad, since I did not go to Trujillo, I could spend all this time with my dad. Because when my mom and I travel there, my dad stays to take care of the house.”

The child’s name was changed to protect his identity.

This story is part of the «The Children of the Crisis» series, which was written in association with the Community Learning Centre (CECODAP, by its Spanish acronym)

She Can Only Think of the Moment When She Will Open the Door
Oscar Navarrete Has Not Forgotten How to Play to Win
Those Were Not Belmer's Plans
Who Murdered Brayan?