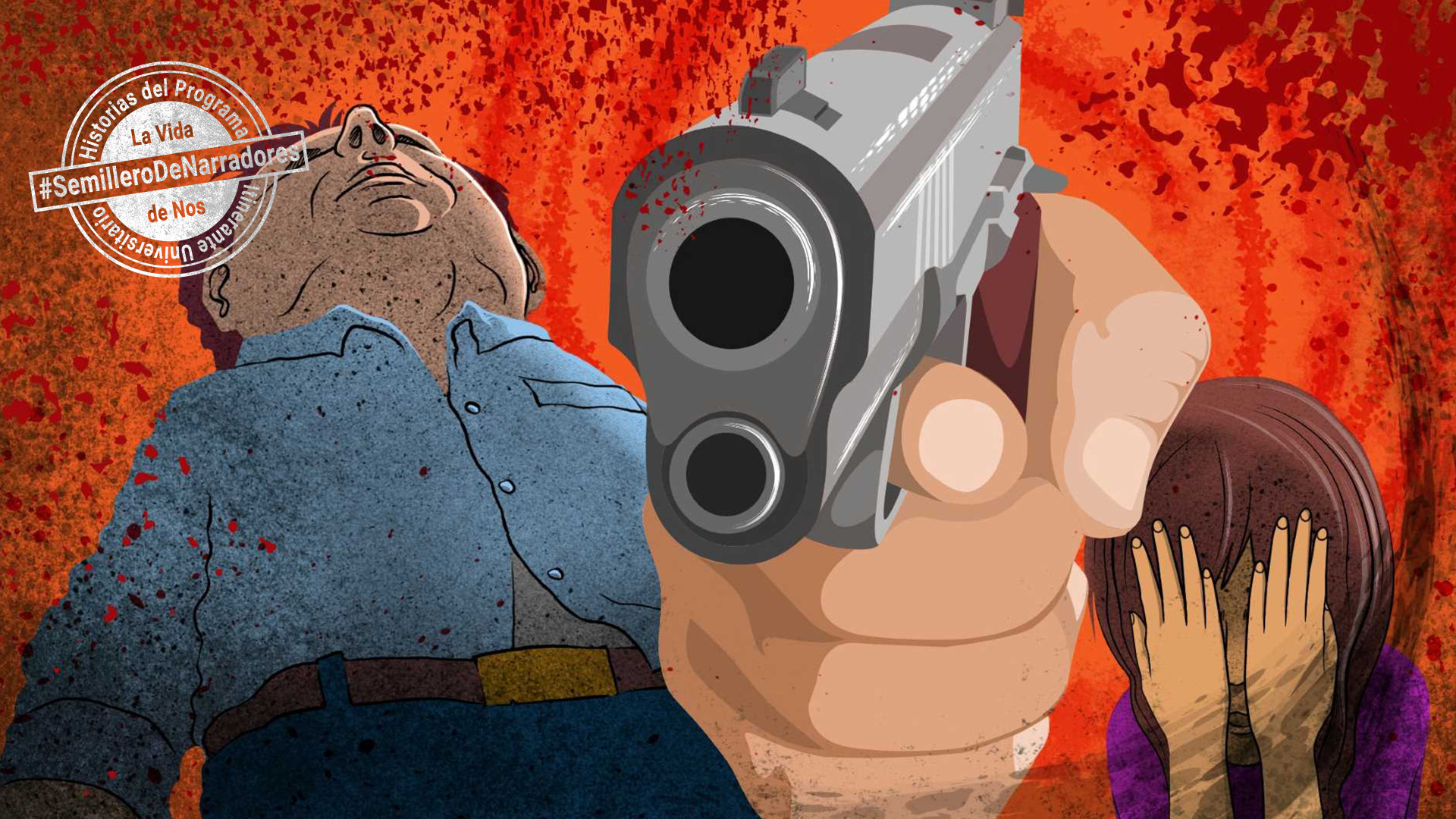 Exactly the Time She Had Been with Yair

The most pressing need of Yair López and his sister Leonela in their hometown of San Juan de Colón, state of Táchira, was to find the drugs that would prevent their father’s foot from being amputated. And that is just what they were doing the day misfortune dealt them a devastating blow…one which they could not have foreseen.

Larry Yair López Medina was a security guard at the Dr. Ernesto Paolini Hospital in San Juan de Colón, state of Táchira. On Friday, January 18, 2019, he started his shift one hour earlier than usual. He was there, but his mind was elsewhere.

In November of the previous year, his father had had a motorcycle accident where he fractured his right foot, as a result of which he was confined to living within his room’s four walls. He had now developed a severe acute infection and was at a risk of having his foot amputated. Neither Yair nor his sister Leonela could find the drugs that his father had been prescribed. ‘Amoxicillin, ciprofloxacin, meloxicam, dexamethasone,’ those were the names that they had been repeating for days whenever they entered a place where they thought they could find them…to no avail.

And that was Yair’s main concern that morning. Maybe that is why, leaning against the door of the hospital kitchen while he waited for water to boil for a patient who had a high fever, to which he volunteered, he didn’t notice a man who walked past him, looking nervously in all directions, as if he had lost something or someone.

Yair had left his house that day hoping that they would finally find the medications they so urgently needed. It was customary for him to call Leonela from the hospital to see if she had had any luck in her tour of the town’s drugstores.

He called her for the first time at 9:00 in the morning.

“Hi, Leo. Did you find Dad’s medicines?” he asked her.

“No, I still need to visit other pharmacies.”

“I’m just arriving at the Trinidad Clinic pharmacy; if I can’t find them here, I’ll let you know so that you try at the hospital.

Yair had been watching attentively the dispatch of medicines to the healthcare center in the hope of finding his dad’s treatment. That morning he was able to verify that the hospital had received the drugs, but only as an injectable solution, and they needed them in tablet form.

Frustrated, he returned to his guard post. And, as he always did, he lent a hand to the few nurses and housekeepers that still worked there, who could not keep up with their duties.

Yair and Leonela’s zeal and resolve in caring for their parents José and Ana was unflagging. However, Yair’s urge to help them had grown even stronger after Yanis, his younger brother, died. It was in March of 2012, at a liquor store in Colón, when someone fired a gunshot to his mouth, killing him. It was a confusing event. Apparently, Yanis tried to defend some guy ‘in trouble’ and was hit by a bullet that was not intended for him.

At 11:30 a.m., Leonela’s cell phone rang again. This time, though, it wasn’t Yair. It was a call from a number that she didn’t have on her phonebook. She answered. A strange feeling of fear took over her that only increased when she heard an agitated voice asking for her:

“There is an emergency at the hospital. Come here, quickly.”

«My dad must have had a heart attack” was the first thing that crossed her mind when she recognized the voice: it was Janet, one of her parents’ neighbors.

When she arrived at the hospital, her fear increased. She could see relatives and acquaintances at the entrance, and they were as shocked as she was: right in the emergency area was Yair’s lifeless body.

There he lay faced down, covered with a blue sheet halfway up, at 40 years of age.

As Yair headed to the kitchen to boil water for a sick boy, a man who had entered the hospital through the emergency area shortly after he had arrived was looking for him. The man got off a motorbike and let the driver with the engine running.

The man carried a photograph in his hands; he would look down at it, then he would look up, turning his head in all directions. He moved quickly. No one could tell what he was up to, but people saw him check the faces of all the men around. He eventually gave up and was on his way to the exit when he heard someone shout Yair’s name. One of Yair’s co-workers was waving at him, making jokes.

Yair, who was still standing by the kitchen door, answered back… and the man with the photograph approached him and shot him right between the eyes.

One of the doctors barely managed to run to his help:

“Help me! He’s still alive!» she cried out in terror.

Her screams made the murderer, who was already on his way out, return and fire another three shots at Yair’s head.

Then he got back on the motorbike. He and the driver drove south on the Luis Hurtado Higuera Avenue.

Leonela couldn’t stop thinking about her parents. This new blow was inflicting a pain that was very similar to the one they had experienced after the death of their other brother. It was as though she was living in a nightmare.

The time that passed since the Táchira police and the National Guard arrived at the scene of the crime to collect evidence and transfer Yair’s body to the San Cristóbal morgue seemed like an eternity.

They held a wake for him at their parents’ house, where they sang rancheras by Antonio Aguilar and placed cocks and soccer balls on the casket because those were Yair’s passions. He trained every afternoon; on Sundays, if he could, he would go to the championship games with the Colón soccer team. As for the cocks, he was trying to stay away from cockfights, but he loved those animals anyway.

Yair’s family couldn’t make any sense out of that tragedy. They had questions themselves that they needed to answer.

At first, they arrived at the conclusion that it had been an act of revenge: Yair had turned two thieves who had stolen the piping of the hospital’s air-conditioning system over to the police. But how could have they if they were still in custody? Maybe they ordered him killed.

They also remembered something that had happened two weeks earlier: Yair had had an argument with a national guard at a gas station in Colón. The officer demanded that Yair change his motorbike’s gasoline-rationing chip, which is a mandatory device for all motor vehicles in Venezuela’s border states, where fuel smuggling is rife, but Yair refused and the officer threatened to kill him: «You’d better go to another gas station… You stink of formaldehyde.»

In the family’s opinion, this unidentified guard was also a suspect.

There were also rumors among Yair’s neighbors and friends that he had been killed by a member of a colectivo. They suggested that the incident might have been related to his ties to Chavismo, but his family had no recollection of him having any problems back then.

He was once indeed a member of the United Socialist Party, and that is where he met Carolina —35, a public school teacher who he had been dating for eight months. Carolina also arrived at the hospital the morning of the assassination. She wouldn’t stop screaming and ended up hitting the cops and pushing past them to throw herself on Yair’s lifeless body, crying incessantly. Her clothes were all stained with Yair’s blood.

A month later, she got the words ‘Larry Yair’ tattooed on her chest.

Their need to understand what had happened made Yair’s relatives initiate their own investigation in parallel with that of the criminal investigations police (CICPC). They had no clues or exact details. «Yair was a good person. What could have happened?» they wondered. Little by little, they came up with some information. Leonela started asking Yair’s friends and acquaintances if they knew anything.

The answers to their questions came from the CICPC itself: the intellectual author of the crime was an informant for a colectivo known as ‘Los Moscos’. According to the investigations, the man had been Carolina’s partner. At the time of the murder, they had been eight months apart, which is exactly the time that she had been with Yair.

The informant, a man named Jean Carlos, had been following Yair for several months, going through the plan to kill him. It all had to be done without Carolina ‘in no way’ getting hurt.

The executioner got the photo and hints to locate Yair through Carolina, although not directly but through some teachers who worked with her, whom she had told about her new relationship and had played some voice messages from her lover. She even shared them with Yair’s ex-wife, with whom he had two children.

It didn’t take long for Leonela’s distrust of Carolina to be validated. Carolina visited her frequently for about a month, but one day she just disappeared.

Shortly afterwards, they learned that she had had the tattoo of Yair’s name removed and that she had left the country with the informant, whom she never really abandoned: it turns out that she was dating the two men at the same time. Leonela herself was able to verify it through a photo of Carolina’s WhatsApp profile, before the latter blocked her as a contact.

Leonela and Yair’s family wanted to continue with the investigation. Maybe the gunmen could be identified. But they decided not to. Yair’s father feared that it would bring more death to the family.

The months have passed. Life goes on…or death is just beginning. Ana, Yair’s mom, insists that his son was a good man who didn’t mess with anyone. She has too many questions in her head and can’t stop wondering what could have happened. She hopes that one day she will know for sure and she will have a little peace.

Leonela keeps dreaming of him. In one dream, Yair asked her to light candles and stop crying for him because he couldn’t go towards the light.

Every So Often She Returns From Her Unresolved Journey into Oblivion
When I Saw My Mom Cry, I Knew We Would Be Jailed
I'm Not Afraid Anymore
They Are The Ones Eliana Smiles at Now