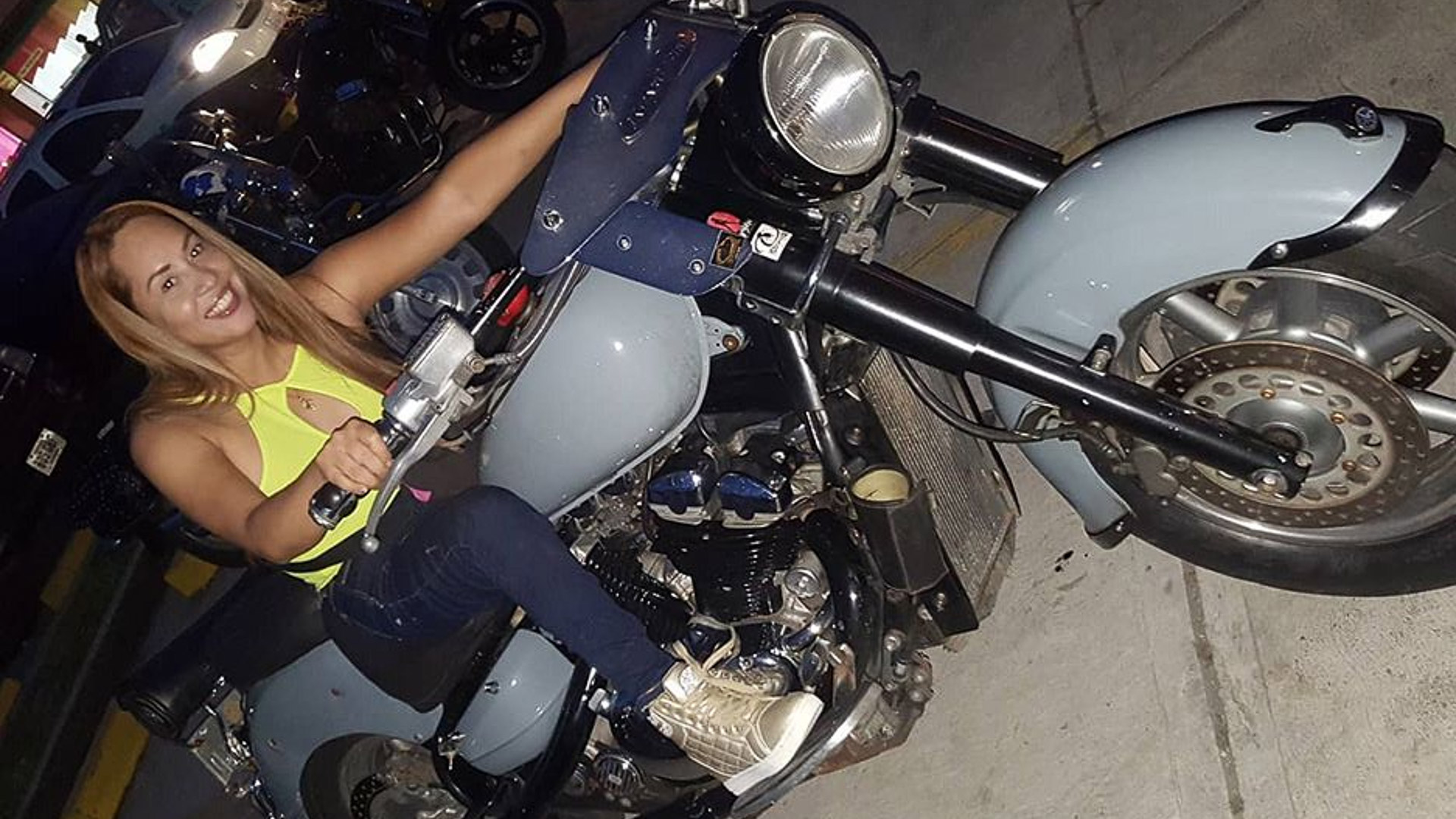 Florelys Linares was 18 years old and was studying education at the University of Carabobo. Having heard rumors that the university would be privatized, she —just like some of her fellow students— took to the streets to voice her disagreement. She was riding a student bus when her life took a different turn.

Only one person can be seen through the windshield of the green Corsa that parks at the entrance of the First Notary Office in Acarigua, Portuguesa, from Monday to Friday: it is a woman heavy on mascara, wearing lipstick, her hair neatly groomed. Sitting in the driver’s seat, just ready to get off, she takes a couple of things from the passenger’s seat. Then, she takes her legs out of the car and places her feet on the pavement, but she does not get up. Instead, she waits for someone to approach. She leans over and pulls the lever under the seat to open the trunk. And she just sits there, waiting.

Whoever comes forward, always a man known to her, greets her with a ‘Hello!’ as he gets to the trunk and pulls out a wheelchair.

Running. Florelys always loved to run. Ever since she was able to maintain that balance that is a milestone for 2-year-olds, after many a stumble and fall, it was a common occurrence to see her run after one of her siblings, or a cousin, or dodging her mother, who would chase her with a belt in her hand, threatening to discipline her after some mischief.

There was time for her to play hide-and-seek, punt some balls, and practice soccer, basketball, or volleyball. And, as the trees shed their leaves, there was also time for her to try on the heels of her six bigger sisters, wear miniskirts, and show her legs, which she found shapely. She would attend family parties, where she would dance to the tune of Wilfrido Vargas’ merengues and jump up, shaking her head, to Pégale con el martillo, a song from Caramelos de Cianuro.

She lived the road to adulthood without much of a hitch: your typical high school antics, outings and gatherings with friends, your first crushes, your sweet sixteen parties… After high school, she wanted to study law, but she got admitted to the University of Carabobo to pursue a different career: education.

After removing the wheelchair from the trunk, the man places it in front of the driver’s door. He bends over and puts all his strength into lifting Florelys, who weighs about 117 pounds and is 5’18. He holds her in the air, turns around, and places her on the chair. She would then head to her post and go over legal documents. Occasionally, she is interrupted by the maintenance woman or another colleague, who most kindly come by to say hi. 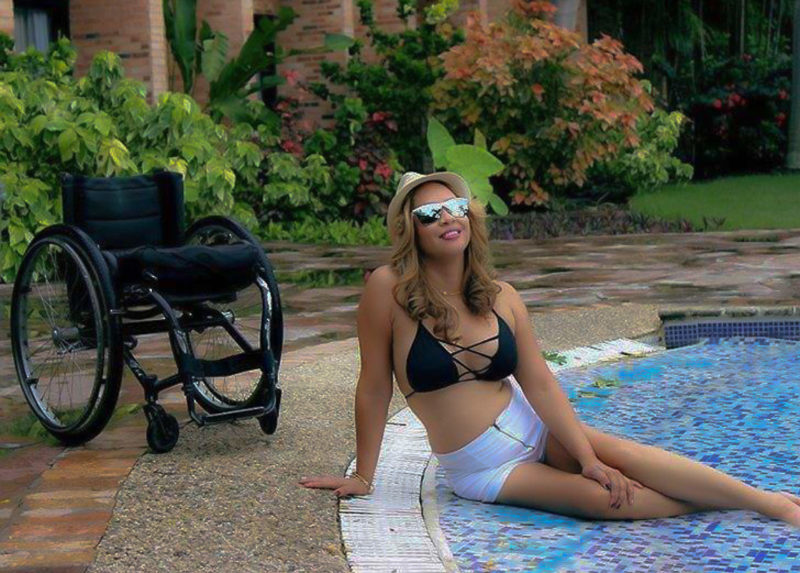 Both the wheelchair and the car are essential to her daily life, for they help her get around. They take her places where her legs, powerless, cannot.

That is how her legs are since a bullet shot from the gun of a Carabobo Police officer pierced one of her lungs and got stuck between the fourth and fifth vertebrae of her spine. It would be 22 years now in 2019. It all happened on October 9, 1997. Florelys Patricia Linares Flores was a University of Carabobo student.

“Let’s get out of here, chama. There are no classes,” she told her friend while she grabbed her backpack to take the university bus. A young man with a megaphone had just reported that the activities had been suspended. Students walked scattered around the campus with white cardboard signs that read, in color letters: «Say No to Privatization”. A rumor had been spread that the university would be privatized, a move that the students rejected.

It was approximately 9:00 in the morning. Florelys, her friend and some other people got on the bus.  The men made the vehicle take a different route and stop at one of Valencia’s avenues, where they got out and began to spray-paint the walls with the same words that Florelys and her friend had read on the banners at the college: «Say No to Privatization!».

Barely five minutes had passed when jeeps, cars, and motorcycles of the Carabobo Police began to appear through the windows of the bus, hauling their sirens.

The bus took off quickly. Amid the noise of the sirens, Florelys realized that they were being chased. Her legs were shaking. She clung tightly to the front seat tube and felt her hands sweat.

“Nobody leaves this bus!» said a voice which Florelys has not yet given a name or a face to; she just knows that it came from one of the eleven fellow male students, who was as terrified as she was.

All of a sudden, it was not only the police sirens that wailed: shots could also be heard. Florelys remembered what they always recommend people to do at times like this: «At the sound of a shot, throw yourself to the ground.”

And so she did: she threw herself on the bus’s tin floor on the back of the unit.

“Calm down. They can’t charge against the university transport units,» said the same voice she had already heard.

But the police did shoot at the bus. And a 9-mm bullet ended up in Florelys’ body.

Although there was no blood on or around her body, she began to feel a weird sensation: it was as if she was fainting.

The bus made it into the College of Medicine of the University of Carabobo and was surrounded by the police. But somehow they managed to take Florelys to the Enrique Tejera Central Hospital in Valencia, which is located miles from there. Her buddies were begging, crying, praying for her life.

Until she could be operated.

She was only 18 years old and death was already watching her closely. Her hemoglobin count was very low. She survived respiratory arrest. Florelys and her family spent 15 days in the Intensive Care Unit, and two more months in the surgery area. Her mother and siblings never left her side.

The charge of ‘attempted homicide’, which the Office of the Public Prosecution Service had established to accuse the officer who had shot the bullet that was removed from Florelys’ body, was changed to ‘infliction of very serious injuries’. The prosecutor in the case considered that she could recuperate and walk again.

And recover she did.  Her heart’s wounds healed. It took time, money, travelling, physiotherapy, and psychological therapy. Frustration and crying, lots of crying. But she forgave, accepted things as they were, and moved on. She learned and adapted to her new life.

However, as it had been her wish, she graduated as a lawyer.

In the words of Facundo Cabral, «Life is a celebration. It is a celebration if you understand that it is not as it should be but just the way it is.» Today, for Florelys, who is 42, life is not only a celebration but also a story to tell. She has been narrating painstakingly her healing process in a blog that she created, which a cousin journalist helps her keep. She has told her story in interviews, and she shares her experience in conferences with such a determination that many are convinced that a condition such as hers does not prevent one from carrying on.

She has taken part in over 20 adaptive sports competitions on her wheelchair, including the 26.2-mile Chicago Marathon in 2017. She has plunged into deep waters adaptive diving. She has not stopped dancing because she takes part in physically integrated dance performances. She is a member of the ‘Manos sobre Ruedas’ [Hands on Wheels] Foundation, which defends the rights of people with disabilities. And from Monday to Friday she rides her Chevrolet Corsa, adapted with a motorcycle lever, to the Office of the Notary Public in Acarigua, where she works as a lawyer. 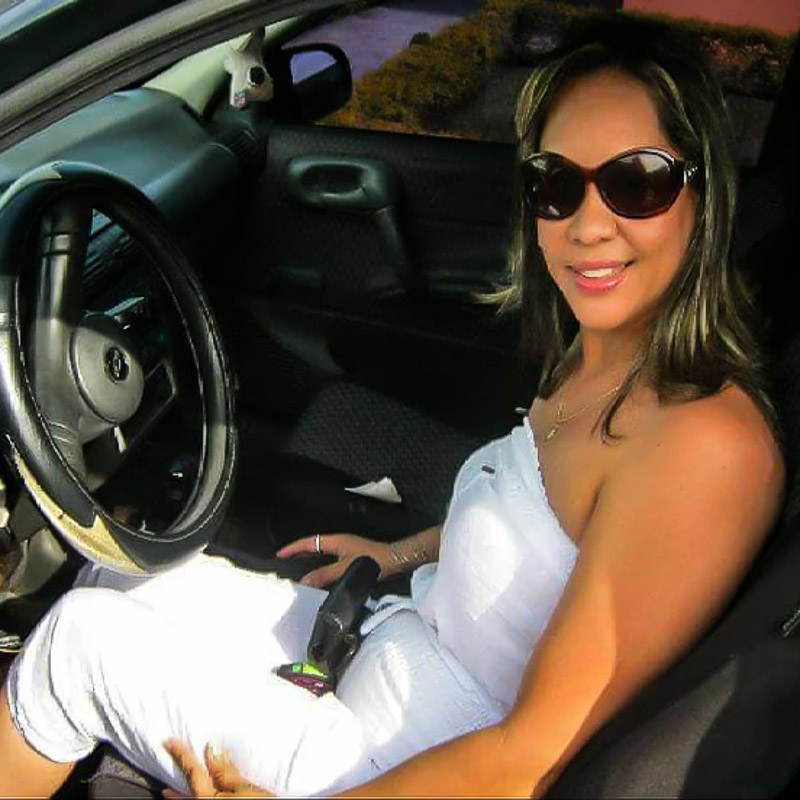 This story was written within the framework of the Thirteenth Cigarrera Bigott Narrative Journalism Seminar, 2019.

Every Single Day, She Wonders What She Will Feed Them
Iván Simonovis: Taking the Long Way Home
They Knew They Would Get In Anyway
He Said We Would Watch Him and Mom Grow Old