Hand in Hand, They Managed to Fill the Blue Basket

The Superintendence of Institutions of the Banking Sector froze the bank accounts of Alimenta la Solidaridad [Feed Solidarity], an organization that maintains 239 community kitchens in 14 states in the country, there where 25,000 at-risk children are provided with meals on a daily basis. Una sonrisa, Una esperanza [One Smile, One Hope] is one of 40 that operate in Petare, the largest slum in Latin America. It is coordinated by María Angélica, a 31-year-old woman who has always dreamed of being a cook and who, side by side with the community, has endeavored to keep the kitchens running. 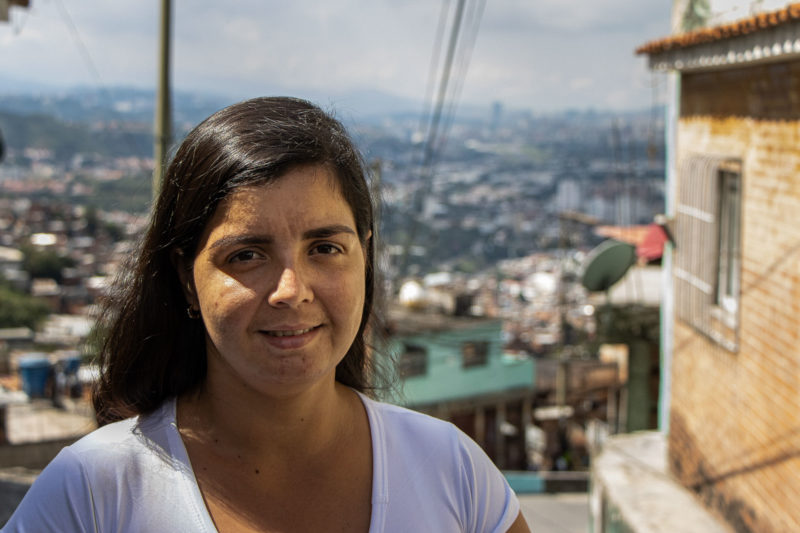 María Angélica receives the three containers that Viyatza Barreto hands her.  She looks at the young woman, concerned, and asks her how she feels. She knows that it has been four days since her grandmother passed away and that the latter’s body is still in the Bello Monte morgue. They have not been able to cremate her remains because they have no money to pay for the funeral expenses.

“How are you managing to eat?,” asks María Angélica. She knows for a fact that the girl, whose father is behind bars, found herself alone with her three young children and her youngest brother.

“We cook some rice that we get around here. At least today, I am taking these three small bowls with the beans that you will give me and I will mix them with the kilo of rice that I have to make the most of it so that we can all eat and that the rice has some flavor. You know that the one who figured everything out was my grandmother, and she’s gone now.” 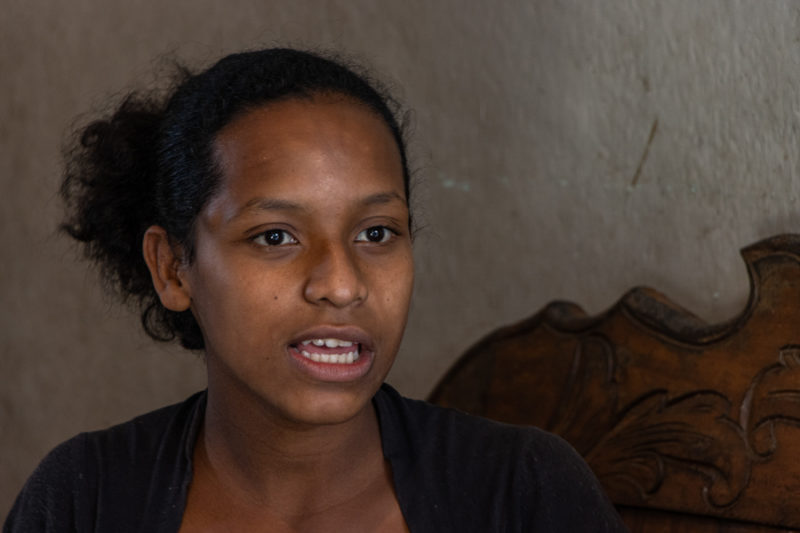 Beba, which is how Viyatza Barreto is called by her family, speaks in a soft voice, staring at the floor. She is 21 years old, short, dark-skinned, and thin, very thin. She lives in the Carpintero community, which is where the community kitchen that María Angélica and her family run is located. Beba says she will come back when lunch is ready for her containers filled with food. She waves goodbye and gets lost in that endless steep slope that is this slum, one of 1,500 in Petare, at the eastern end of Caracas. Now that she has left, there is great silence in the house’s living room, and the sound of potato shells falling to the kitchen floor seems amplified.

María Angélica gives thanks to God because, today, the community kitchen will serve the minestrone they are cooking. La Beba will have more than just rice to eat. And she makes that remark with the same concern that the other people there have shared for days. 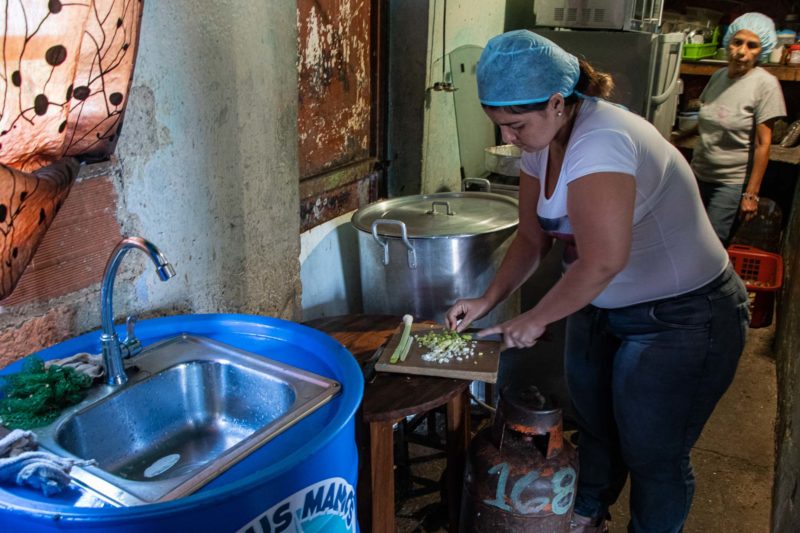 It is December 10th, 2020. On November 24th, the Superintendence of Institutions of the Banking Sector froze the accounts of Alimenta la Solidaridad [Feed Solidarity] an organization that was created four years ago by activist Roberto Patiño to provide food to vulnerable communities. There are 239 soup kitchens in 14 states in the country that feed 25,000 at-risk children (which is 5,000 in excess of the capacity of the Poliedro de Caracas ) on a daily basis. It is almost a miracle that such a network exists in a country where 57 percent of households have had to borrow money just to be able to put food on the table, or have been forced to cut down on meal portions, or have had to beg to for money to eat. That is according to Caritas Venezuela.

Ever since its accounts were frozen, Alimenta la Solidaridad has not been able to stock its community kitchens, the cupboards have gradually emptied out and the women charged with preparing the meals have had to work magic to make the most of whatever is left. This soup kitchen in Carpintero, which was given the auspicious name of “One Smile, One Hope”, is one of many, and one of the 40 that operate in Petare, the largest slum in Latin America. 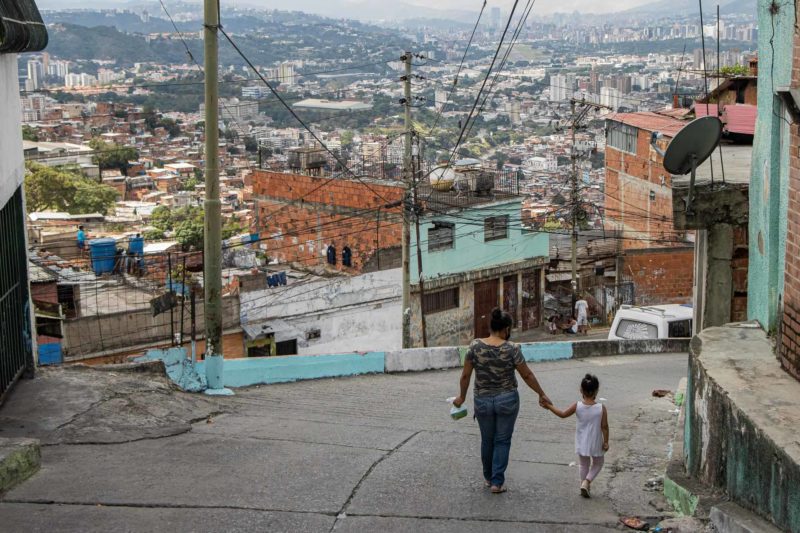 They had stored food donated by a former beauty queen who sponsors the community kitchen. They began to use it, trying to make it last as long as possible. María Angélica seasoned the black beans with onions and some sweet pepper, and added more vegetables and less meat to the soups. They would prepare bollitos [cornmeal rolls] and eggs, vegetable stews, beans and vegetables, and broths.

Fearing that the stock would run out, she ventured outside the kitchen.

She would go to the bodegas in the area and ask the owners to exchange a package of corn flour for one of pasta.

She would go to open-street markets, where chicken is sold at more affordable prices, and ask for discounts from merchants.

She would take food from her own house to cook it in the soup kitchen.

There was a lot of uncertainty about a question to which no one had an answer: What to do if they ran out of food? Because if one thing was clear to them, it was that the burners could not go out. There are 100 people, mostly children, who rely on the hot meal that they are served here. Often it’s the only meal they have throughout the entire day. They have nothing to eat at home. 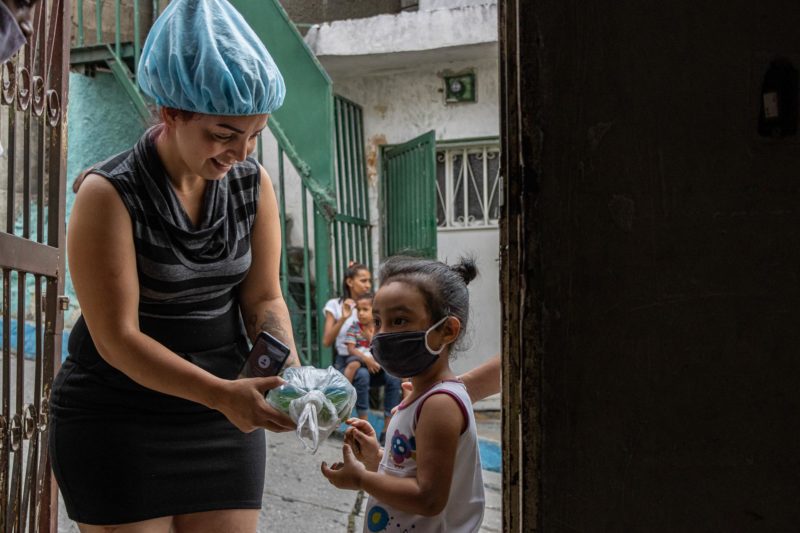 María Angélica is 31 years old. She is a short woman with a stocky build, long hair, and pink cheeks. She always dreamed of being a cook and opening her own restaurant on the banks of a river. That’s why some years ago she bought a house in Barlovento, deep in the state of Miranda, and moved there. However, after a while, the country’s economic crisis drove her back to Caracas.

Her family lives in Carpintero and engages in social work there. Every December, her parents set up Nativity scenes and paint street murals or help paint damaged walls, and her sister collects clothes and toys for the newborns. Whenever María Angélica visited them, she would agonize over the children from the area who knocked on their door, asking for something to eat for them and their families. She talked about it with her mother, who told her she would contact some friends who used to work at the Sucre Municipality City Council to see what could be done. It was after that, in 2018, that Una sonrisa, Una esperanza was established. 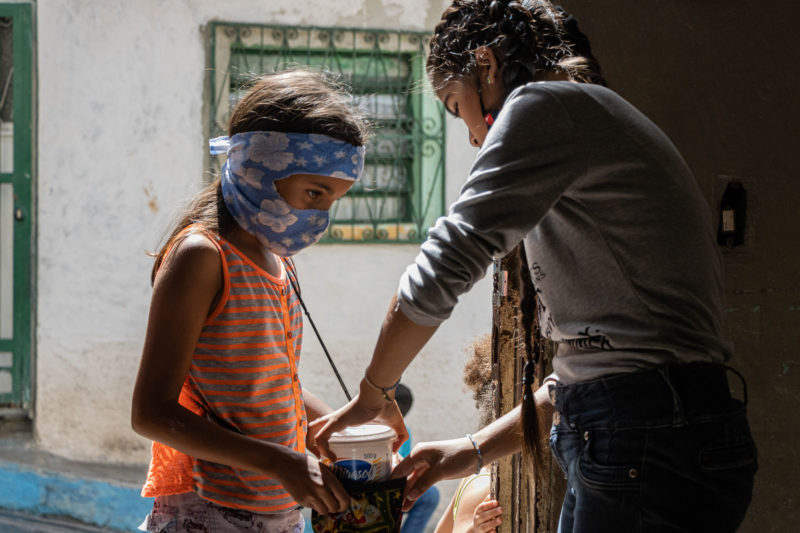 And so María Angélica divided her time between her job as a school worker and her activities coordinating the community kitchen, to which she devotes more and more time. Now, two years later, she leaves her house on the old Petare-Guarenas road at 4:30 in the morning and arrives an hour later at her mother’s house in Carpintero to make the empanadas that she sells to order. Once she is done, she fires up the burner, which is made of metal pipes, and starts to prepare what she will serve in the soup kitchen. Since the beginning of the COVID-19 pandemic, every time there is no public transportation or she runs out of cash to pay for her fare back home or she comes up with an idea to earn some money to purchase food for the community kitchen, she sleeps over with her children on the mats she arranged on the second floor of the house where the soup kitchen operates.

Word about the freezing of Alimenta la Solidaridad’s accounts spread through the alleys of Carpintero. Neighbors knew what was happening inside Una sonrisa, Una esperanza. On December 1, which is the Day of Giving since 2017, they came together to offer their support. That morning, the kids gathered in the street where the soup kitchen is located and, with a smile on their faces, painted the sidewalk and the front of the house. They then made a banner that read: «Ayuda a Una sonrisa, Una esperanza» [Help One Smile, One Hope] and stood at the house’s entrance, asking for food donations. They carried a blue basket. It was empty. 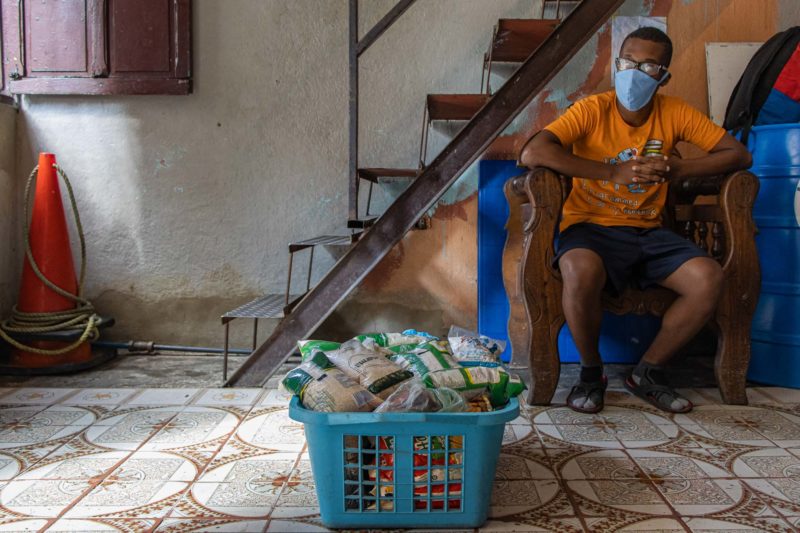 Slowly, people began to arrive with kilos of rice, pasta, corn flour, beans, sugar, or whatever was within their reach. Even La Beba, like most did, took something from her CLAP box of subsidized food and pitched in. They collected more than 30 kilos of food. Hand in hand, they managed to fill the blue basket.

That day, María Angélica felt that they were not alone. It was a respite during these days of worry that have not ended.

Ten days have passed and they are yet to receive supplies from Alimenta la Solidaridad. So, they took the five packages of beans that they are cooking today out of the blue basket where they keep the December 1 donations.

Jhon Perozo, who owns a bodega in the area, has just knocked on the door of the soup kitchen. He brings a soft drink for María Angélica and her helpers and the children who sit on the steps and chairs, waiting for the food to be ready to help serve and distribute.

María Angélica returns to the kitchen to continue seasoning the minestrone. She says she is confident it will be enough for everyone all. «Because there is always enough.”  She would stop what she is doing to get out and receive a kilo of rice, or flour, or another staple, from people like Mr. Jhon Perozo. When she gets back in, she stirs up the contents of the giant pot that releases a delicious aroma.

It is already boiling.

After a few minutes, she goes out and asks two of the children to organize the bowls that those who benefit from their food have started to bring in. Her sister gives them a shout from the kitchen that the minestrone is ready.

María Angélica nods and the six children in the room set things in motion. Some place a wooden table by the door; others take out the plastic containers brought by the neighbors from the bags; and a girl places them on the counter next to the boiling pot.

They organize a human chain headed by María Angélica: she fills the containers with the minestrone and passes them on, one by one, to the girl charged with putting the lids on; the latter, in turn, hands them down to another girl who places the food in bags marked with the name of each family.

“We never get things mixed up because we already know who owns every bag and every container,” she says.

They fill 95 containers in less than 20 minutes. Maria Angelica would not keep track because, in her own words, if you start counting how many are there left to serve, chances are that there will not be enough food for everyone.

And, indeed, there is enough food for all. They have filled all the containers and there is still some minestrone left in the pot for those who showed up as volunteers and for María Angélica’s parents, her sister, two neighbors, her nephews, and her. That is when she receives a message: After four weeks, the Alimenta la Solidaridad truck will resume distribution of food to the community kitchen. She is overjoyed. She thanks God. She prays for it to be true and that the days of uncertainty will finally be behind them. She prays that everyone, always, will have something to eat.

For Daniel to Return to His Extra Activities Has Become Impossible
He Discovered That There Is Still Color in His World
For Some Reason, They Don't Like Me.
In a Minute Her Uncle Would Step On the Ground