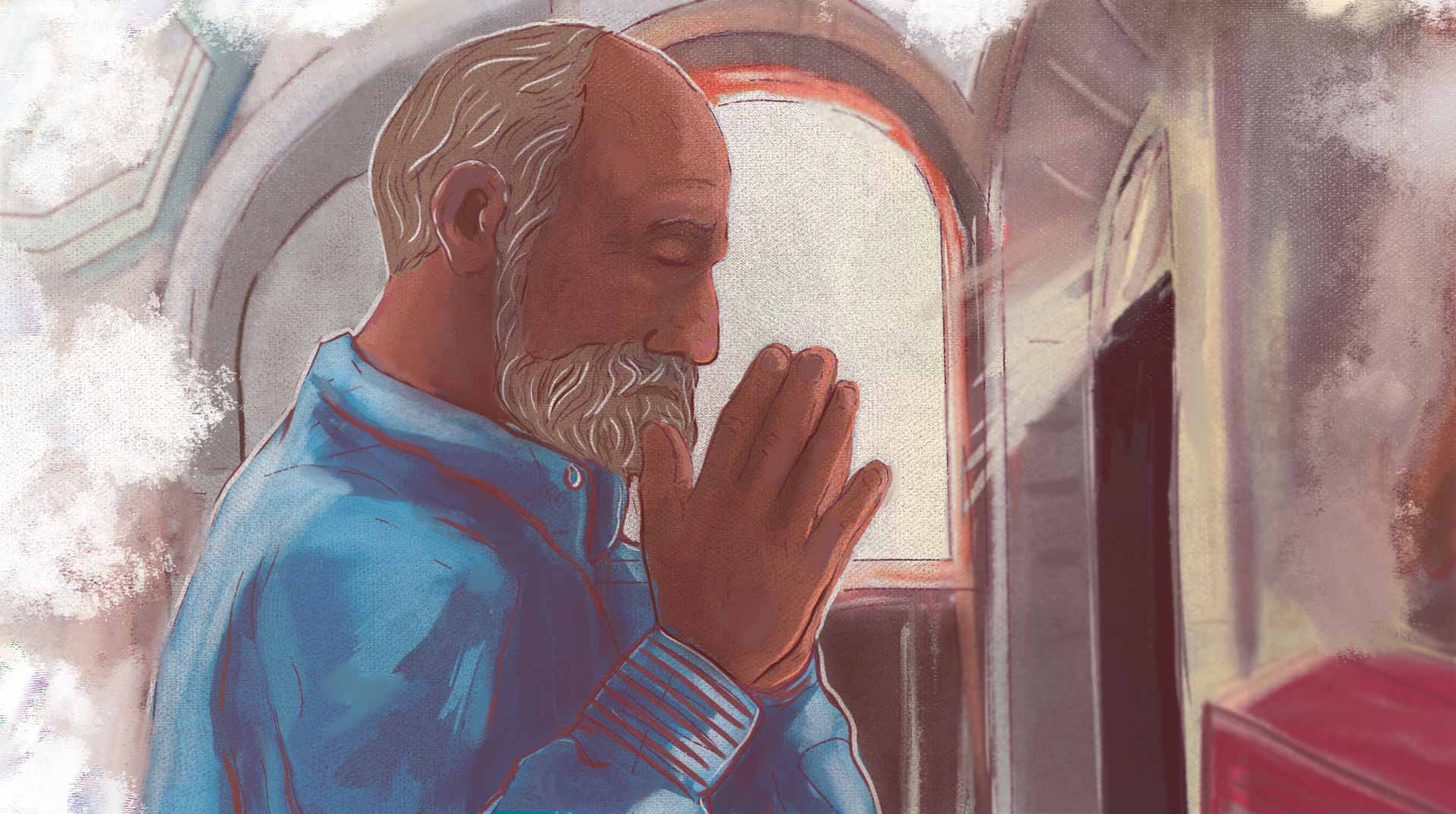 He Discovered That There Is Still Color in His World

For forty-seven years, Luis Antonio Molina ran a blacksmith workshop in Valle del Mocotíes, 50 miles from the city of Mérida. Welding fences, lanterns and doors, he found the means to provide for his family. It was also a way of life. Now, at 63, having been diagnosed with cancer, he feels that life is hanging by a thread. 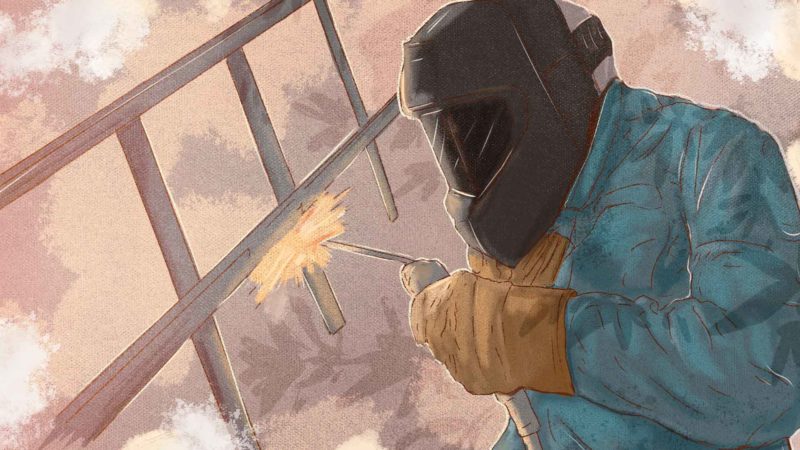 But who doesn’t know Luis? Over the years, his trade brought him a certain fame and added a tagline to his name: «Luis, the blacksmith.» That’s how everyone knows him in that pocket of narrow, sloping streets called Valle del Mocotíes, 50 miles from Mérida, the capital of the state of Mérida, in the Venezuelan Andes. It is an intricate valley inhabited by friendly and supportive people with a vocation for farming who always greet you with a smile.

Few people there are aware that his full name is Luis Antonio Molina. «Luis, the blacksmith” learned blacksmithing from his father. At the age of 19, with the latter’s help, Luis made his first gate. It was a milestone because that was how he discovered the path he would always follow. The memory of that experience will be ingrained in his mind forever. From that moment forward, he perfected his welding skills and became an expert in molding gates, grilles and fences. People from all over town, and even from other villages, arrived at his house asking for some work to be done. A simple steel rod could be the starting point for a beautiful lantern or a massive security grille for a door.

He shared a shop with his father. It was his operations center for forty-seven years. Happy, he found in the trade a way of life and a livelihood to meet the needs of his wife and two children. A life that he built from scratch and one which now, at 63, he feels is hanging by a thread.

Luis, always active in the workshop, would not take time to go to the doctor. It made him uncomfortable. It seemed like a waste of time, because he felt well, vigorous, and healthy. At some point, however, he noticed that he was having trouble urinating and an excruciating pain, more like an unbearable burning feeling, when he did. He thought it was an infection, probably mild, but after a few weeks he knew he was wrong because the symptoms not only persisted but worsened.

One day in January 2021, he went to pee and realized that he was passing blood.

It was then when, distressed, he decided to seek help.

On February 2, he visited a general practitioner who referred him to an urologist. Many a hectic day ensued going from one doctor’s office to another, undergoing one medical examination after another, until he was finally given a diagnosis: prostate cancer.

He was overwhelmed when he left the office, worrying about what awaited him. The doctor talked about several cycles of chemotherapy to attack the cancerous cells and increase his chances at life, that it would be a long and expensive treatment, that he would need about five hundred dollars per cycle, and that he would require surgery. Luis couldn’t fully comprehend the situation. His head was spinning. The word cancer kept repeating over and over again in his mind, like an echo. One thing was for sure, though: he did not have the money to pay for that treatment.

Still, it wasn’t until months later, on Thursday, August 5, 2021, that he felt sentenced for the first time.

Ever since his diagnosis, Luis had to travel frequently from the Valle del Mocotíes to the city of Mérida, where he was being treated at the Anti-Cancer Society facilities. He had tried at the town’s Hospital II San José de Tovar, but they lacked the necessary equipment and specialists.

That Thursday, he got up very early and dressed up in casual clothing rather than in the stained overalls he had worn every single day for so many years. He took the results of the tests that he had been performed days before, including a biopsy that would facilitate a more precise diagnosis, and left. He knew he had a long day ahead of him. At 4:00 a.m. he was at the bus terminal. His appointment was at 1:00 p.m., but he had to leave at the crack of dawn to arrive on time. Although it is only a two-hour drive, traveling there is an increasingly daunting ordeal because the roads are in bad shape and there are only a few buses; so much so that he had to wait approximately four hours at the terminal to catch the first bus.

Luis arrived in Mérida before noon. He had time to walk around the city center. After a while, he entered the cathedral. He has always been deeply religious. Yet, he didn’t get to the temple to raise a desperate prayer, but rather to try to find some peace of mind, some quiet. He entrusted God with his health. «He is the only one who can save me,» Luis said to himself. And kneeling before an image of the Most Blessed Sacrament of the Altar, he was eventually able to put himself together, even though he was filled with uncertainty.

Feeling more composed, he headed to the doctor’s office.

“What is my diagnosis and what can I expect from the treatment?” Luis asked the doctor, who already knew the answer and was trying to tell him as empathetically as possible what he was about to face.

Upon reading the tests results, the specialist told him that the cancer had progressed and that the tumor had spread to the outside of the prostate gland and had become metastatic. It was at that moment that he felt hopeless. The physician made it clear that there were many treatment options and that not everything was lost, but Luis was already torn, crushed, as if the world had suddenly collapsed. He knew that it was unlikely he could be treated in a public healthcare facility and that he could not afford a private hospital.

On the other hand, he did not want to be a burden to his family. One of his sons migrated to Perú a few years ago. Things have not been that good for him there. He would occasionally send money, but only enough to buy food. Luis’ other son has never been close to them. His wife has dedicated herself exclusively to the household for years now.  And the blacksmith shop that helped him provide for his family was no longer viable. He was receiving fewer and fewer orders for large items such as gates or fences. When the COVID-19 pandemic hit in March 2020, he went bankrupt because the number of welding jobs decreased dramatically. Nonetheless, even if strapped for cash, he would tell his customers:

“Give me whatever you can spare. It will be well received.”

Because a little something is better than nothing, he said. Savings were dwindling. What they have now is Luis’ meager earnings from the odd jobs he takes from time to time in the workshop and the money his son sends him from abroad.

He left the doctor’s office at almost 3:00 p.m., but he couldn’t travel back home because public transportation is available only until 1:00 in the afternoon. A neighbor who has an apartment in the city offered him a place to stay. Once there, he finally burst into tears. He cried because he had no money. He cried because he felt alone and fragile. He couldn’t recognize himself. The strong man everyone knew, «Luis, the blacksmith,» had broken down.

He felt vulnerable and couldn’t sleep. It was a long night during which he reflected on what he was going through; he wondered how long he had left to live; he wondered if undergoing the chemotherapies was really worth the while; he wondered if it made sense to try to find the money to pay for the treatment. The next day, sad and sleep-deprived, he returned home.

Most of all, he felt very lonely.

The rumor that «Luis, the blacksmith» had late-stage cancer spread quickly through the town’s streets. And then something occurred that he had not thought would happen: many people in the valley began to show him their support. A neighbor who was a prostate cancer survivor donated him some supplies and offered him advice based on his own experience. Others set about organizing raffles and selling food to raise funds. Those who had once been his clients would approach him, subtly and discreetly, asking him how he was doing, how he was feeling. They became his friends.

The loneliness that engulfed him was alleviated with the affection he was being given.

And that is something that he is grateful for, something that comforts him and relieves so much anxiety, because he is not always in the highest of spirits since he learned that the cancer has metastasized. Luis is yet to begin chemotherapy. He is on a waiting list at the Venezuelan Anti-Cancer Society, but the organization is sent tons of applications and it is a very slow process. After much waiting, they called him from the University Hospital of Merida with the news that they will remove the tumor surgically.

Every so often he looks gaunt and emaciated. He spends his days sitting in the house’s porch on a wicker chair as worn out as those cracked hands whose nails still bear traces of the metal he forged over the years, pensive, isolated, his gaze lost.

His neighbors, his former customers, his friends pass by and ask him:

He looks up, flashes a shy smile, and contemplates the immensity of a mountain that has borne witness to his bleak nights. And in those moments, once again, he feels that he is not alone, that there is still color… and life… in his world.

This story was written within the framework of the “Comenzar a contar(Nos)” workshop conducted by our senior editor Érick Lezama via the El Aula e-nos online platform in the fourth year of the La Vida de Nos Itinerante training program.

Nelson Only Returns in Nightmares
If You Raise Your Head, I'll Rifle-whipped You Two Times More
He Would Do It Again as Many Times as Needed
859 Days Without Seeing the Sky