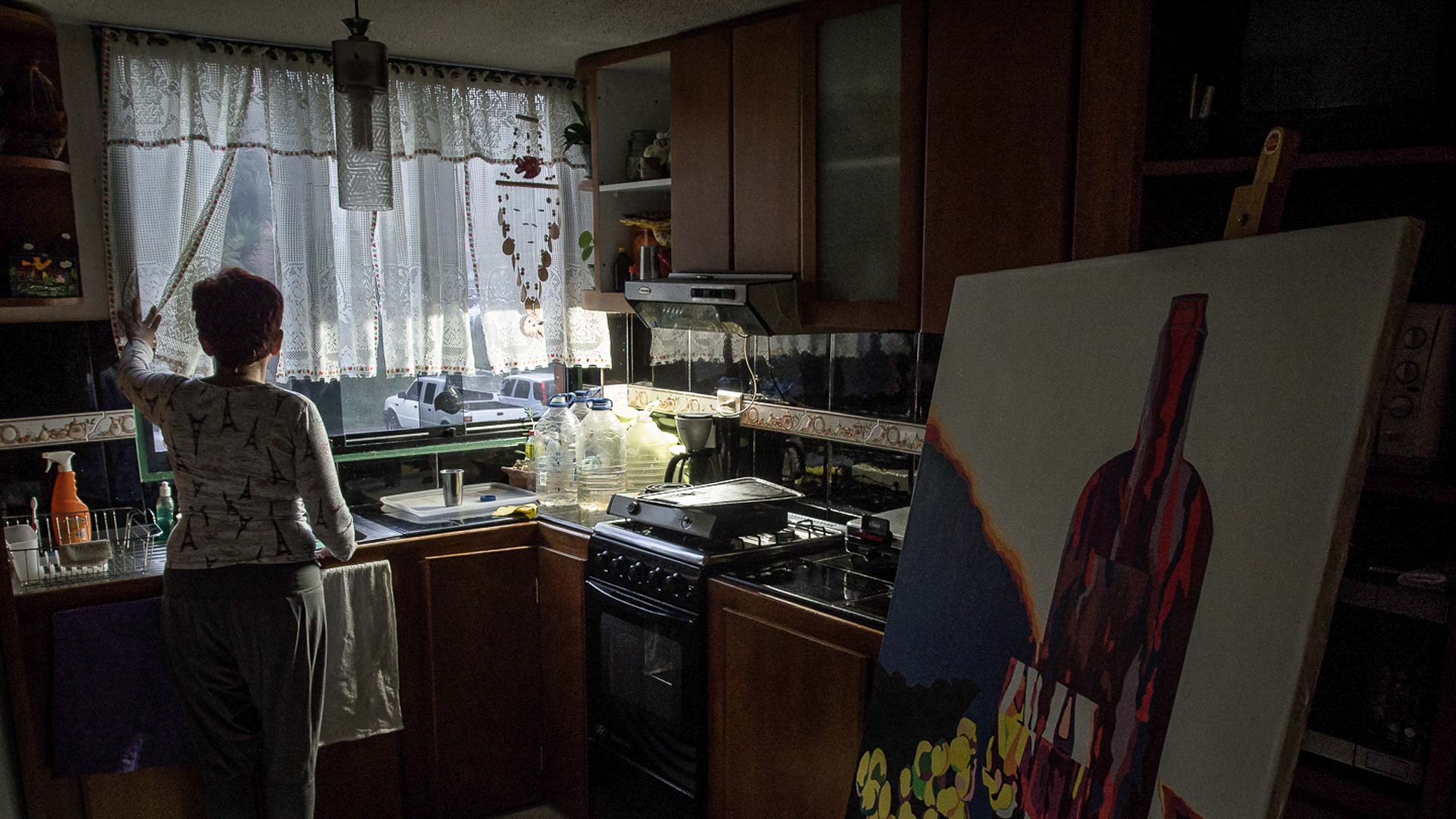 Ana could not handle the great and constant changes involving her daily life. She ended suffering an adjustment disorder and an acute depression. Since her diagnosis, she has been resting, far from the school where she taught plastic arts and which became a hostile environment for her.

She leans over the dishwasher and pulls back the curtain to watch her building’s parking lot. It’s still dark. It must be around 5:00 a.m. A while ago she got up; following what is now a routine. She must be at school at 8:00.

Today she has running water. Ana – fictitious name to protect her identity – is washing dishes, dirty since yesterday. In the cold early morning, muffled by the closed door, the tap fills an improvised water tank in the shower. She must collect as much as she can, because she doesn’t know how many days it would last. By her left side, the washing machine -mechanical witness of better times-, keeps her company with its rhythmic murmur. On her right, on the burners of an electric stove, is a budare (type of pan used to make arepas or corn cakes), and water is being heating for coffee.

During these days she has been thinking to quit her job at school. It’s not something new, but rather an idea she has been feeding for some time, a decision that she has been postponing.

“I do not know what I’m going to do this month,” she says when she looks inside the fridge. Her expectations are uncertain. “With a little luck, my next paycheck will be enough to buy half a kilo of cheese and four rolls of toilet paper,” she thinks.

She checks her watch; it’s almost 5:30 am. She estimates she has just enough time to shower, have breakfast, get ready and go out to wait for a bus.

She opens the door of her youngest daughter’s room and turns the light on. Her guitar, cuatro (type of banjo) and bass are on the bed. It was too much luggage for a long bus ride. She left the country more than a year ago, and with her, also the music left. The oldest, with a master’s degree in chemistry, and a nail repair course, also left six months ago taking far away Ana’s grandchildren.

“With luck, maybe today I’ll see any acquaintance,” she thinks, as she closes the gate of her apartment and secures its two locks. Wrapped in the cold Merida’s (capital of one of Venezuela’s states located in the Andean region) morning, she walks towards the bus stop.

It’s almost 7 o’clock. Ana’s prayer has been heard: a bus approaches and she climbs on it. She is grateful that this time she did not have to travel in a truck with stakes, as she has done so many times because there is no proper public transportation to take her to the school, located in “El Chamita”, a town on the outskirts of the city of Mérida.

Along the way she can’t help recalling the time when she was robbed on a bus. It was three years ago, in 2016. At one point along the way, two boys got up from their seats, and while one watched, the other was stripping the passengers of their belongings. They were especially savage with her. Since she had no money, no pricy cellphone, nor jewelry, while pointing at her head with a gun, the assailant tore her blouse and touched her as much as he could, to make sure she was not hiding any valuable.

“This country came to this thanks to preppy people like you”, said one of the men as he grabbed her graduation ring and put it into his pocket.

These images are still fresh in her memory. She still shivers when remembering them.

In that occasion, Ana used to work in a very different school. Not so long ago, which seems ages, there was no teacher shortage, the classrooms didn’t lack of specialists in physical education, dance, theater, orchard, computer science or, as in her case, plastic arts. The students received a good diet: rice with stewed chicken. And they also had snacks. In fact, many attended classes because the institution gave them food, which were not available in many of their homes.

Her salary is not enough for groceries, clothing and least of all, for savings. Usually she never had transportation problems: she took a bus near her home that dropped her in front of the school, and the same the other way around. There were many buses available, she barely had to wait for five minutes.

But suddenly everything began to come apart.

Her salary wasn’t enough to cover her needs. Even so, she used part of her money to buy cardboard, paper, crayons and watercolors, materials she used in the classroom and that became scarce at her school.

Going and coming back from her school became more and more difficult. Bus units became scarce, to the point that only one, a red one, stopped at her work every two or three hours. And it dropped her at a church where she had to wait for another transportation to get closer to her home. And then, walk.

Then they close the school canteen. There was barely an area devoted to preparing food, which quality declined significantly. Many students deserted. The classrooms were half empty, just between 10 and 15 students. A new principal was appointed, and she insisted the teachers to visit and interview the families to find out why so many children were skipping classes. The answers included lack of uniforms, of shoes, and even food. Some spent their free time to “bachaquear” (reselling scarce goods at higher prices in the streets) with their parents.

The relationship among teachers also changed. They began to receive food combos from the Comités Locales de Abastecimiento y Producción – CLAP (Local Supply and Production Committees, a state program that sell at low cost basic groceries), which gave way to differences and intrigues between the teachers who were Chavistas (regime supporters) and those who were not. The first group met secretly on weekends and received their bags of food, without telling the others. The Chavistas also received kitchens, refrigerators, through a state program where they could buy cheap appliances through their payroll, while the other group had no help at all.

One morning, Ana entered the classroom a little earlier than usual. The children were with their teacher, sitting on the floor, playing. She was carrying her cardboards, pencils, and the drawings prints that the children would fill with color. She arranged her materials on the desk when the kitchen attendant entered. There, on the floor, with dirty hands, no plate or napkin, the lady handed the children their breakfast: an arepa without filling. Some of the children got up to fetch some water from the filter.

While she watched them staring up and reaching their hands for some food, she sensed something else. “We are training them to be beggars,” she thought. She approached the other teacher in the classroom and told her how sad she felt, but her peer barely took her eyes off from her phone and reacted with a gesture of reluctance and disinterest.

It’s already 3:15 pm. Ana recently finished her third and last class of the day. She looks out the window just as the precious red bus passes by. She has a few minutes while it turns around. She hurries to collect her things, and quickly goes down the stairs. She is now ready to sign the attendance book when the assistant director gets in her way.

-It’s still too early to leave-, she says.

-I know, professor; we agreed to leave at 3:30 pm. But it happens that the bus arrived 15 minutes early, and the next one will come by 5:00 pm, more or less. If I have to leave so late, I will not be able to get transportation back home.

-That’s not my problem,” the assistant director says, shrugging her shoulders.

The teacher decides not to give more explanations. She rushes to the exit gate, which is still closed.

– Please, open the gate, I need to take the bus – she asks the front guard.

She clings to the gate and shakes it. She wants to bring it down and get out of there.

– Let me out, I have me kidnapped, call the police! – she yells again and again.

But she is unable to open the gate. One of the teachers approaches and helps her open the door. She runs. The bus has stopped for several minutes in front of the school. Perhaps the driver spotted the scene, and decided to wait. Already at the bus footboard, she looks back and sees many of her colleagues also walking towards the bus.

At 6:30 pm is already getting dark and Ana gets off the only bus that stopped after waiting an hour near the church. She walks from there the almost two kilometers to her home. She is crying in the gloom, dodging the piles of garbage accumulated on both sides of the main street that has become a landfill, when time ago was clean. With fear, she watches the zamuros (vultures) flying off the piles of trash.

—I’ve had enough —she said to herself when arriving home almost in nighttime.

Ana never went back to school.

Since that day, she was given a leave for health reasons. “Adjustment disorder and an acute depression”, said the medical report.

– With leave or not, I would not have returned anyway. I do not plan to go back there again. It’s over for me. The crisis helped me to finally make a decision.

However, she still remembers her students. Teaching is her vocation. After six months of leave, she experienced an episode that moved her: she was walking down the street and a girl walking hand in hand with a woman -perhaps her mother- ran towards her and hugged her affectionately. That girl, who has Down syndrome, had been her student.

She used to sit her on her lap, while she was drawing over the desk.

How Could He Shoot Him?
The True Meaning of "Serendipity"
859 Days Without Seeing the Sky
The Hunger Route