Measles Is Back. May God Protect Us

Priest Vilson Jochem has lived with the indigenous people of Delta Amacuro since 2005. There, he tries to help the inhabitants of those caños [branches of the Orinoco river delta] to weather the harsh conditions in which they survive, which have been made worse by an almost total lack of supplies and medicines. And now he is seeing another threat loom over them, and there is nothing that he can do to avert it: the reemergence of measles, a disease that had been eradicated from the region since 1980. 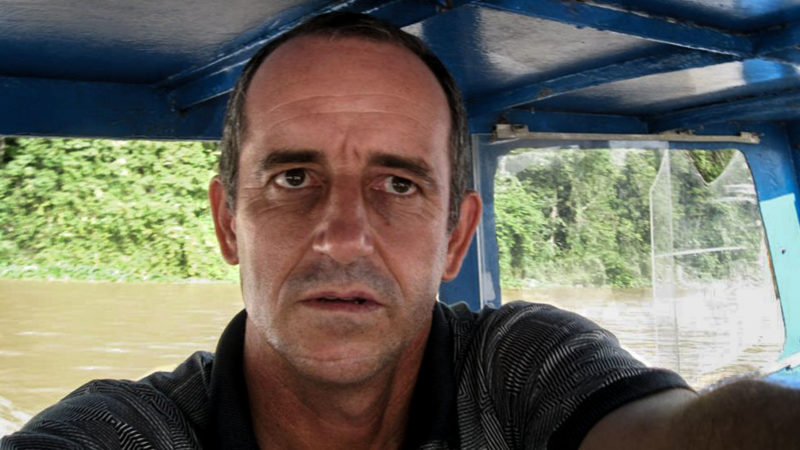 For priest Vilson Jochem, it was as if the Apocalypse was about to unravel.

That morning of March, the cries of a woman could be heard in the port of Nabasanuka.  Everyone started looking out from their wooden houses. Hardly anyone could see what was happening in the vicinity of the ambulatory, blinded by the fog of the season and the smoke from the outdoor fires that the Warao light to prepare sancochos [a traditional soup or stew] made with morocoto fish and taro as soon as the day breaks.

Vilson, alongside Juan Carlos Greco, another missionary like him, was only 20 meters from the ambulatory when he saw a man coming from the port, barefoot, wearing a torn shirt and worn gabardine trousers, like those that the Warao usually pick up from the garbage dumps of Cambalache, in nearby Ciudad Guayana. The man was carrying a boy whose ribs were clearly visible, his skin stretching, his smile unwittingly gloomy. He had small spots on various parts of his body.

Vilson Jochem is a priest of the order of La Consolata who arrived in Delta Amacuro from Santa Catarina, Brazil. He preaches the Gospel in Nabasanuka, in the delta jungle, a place that adventurers dream of going to wander along the Orinoco streams and watch the birds when the sun goes down, with the river skirting the blazing greenery. Since 2005, he has lived and shared with the indigenous people, a long way from his country’s three seasons and the European dishes he grew up eating. Now he voraciously guzzles worms and drinks carato made with moriche palm trees.

That kid would be 3, 4 years old? His father carried him in his arms as if he were an offering to the heavens. Behind, his mother cried, raising her arms, wanting to carry him. That is what she asked, but her walk was slow and she surrendered the lead to her husband. The man was hastily approaching the ambulatory, walking by the port’s pole sidewalk. He went about 30 meters; upon entering, he laid the child on a cold stretcher that had no sheets. The sun was just beginning to rise. 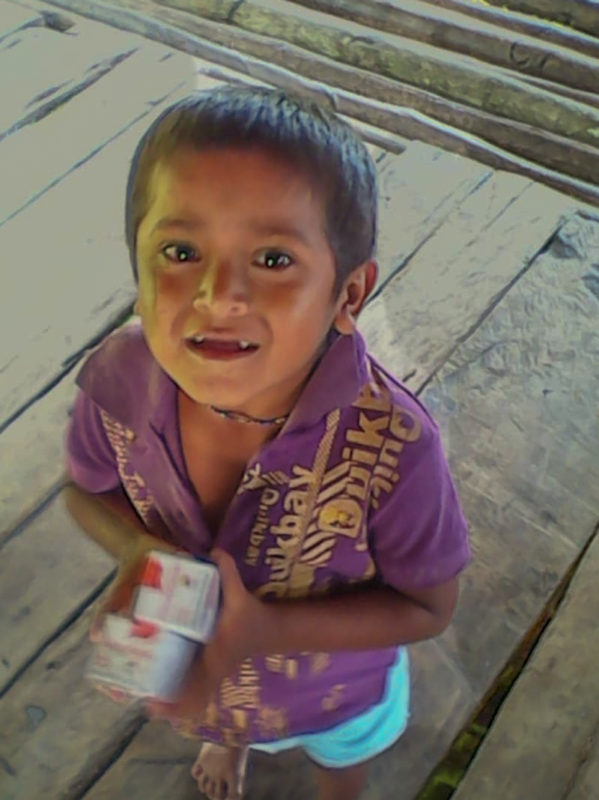 —Mawaraotuma, tamatikayarokotaekida, Tucupitayatakonarukitane ja—  the nurse who had just finished the night’s watch told him in Warao. «My brothers, we have nothing here; you must take the child to Tucupita,» he said.

The capital of Delta Amacuro is five hours away from the caños.

—But how?!  We don’t have enough gasoline and much less an engine to carry him in a boat— the father replied, trying not to lose control.

One could hear the mother behind, wailing.

—Measles is here. May God protect us—, said Vilson, and he set out to accompany the family.

Measles, a disease that had been eradicated from Delta Amacuro in 1980, had reappeared, but this time with greater consequences for the indigenous communities, which in themselves have enormous difficulties in accessing basic services.

A neighbor turned on his power plant with the little gasoline he had left in order to run the Internet on a laptop loaned by the priest. There is no telephone signal in this village; only a router connected to a parabolic antenna that works if the clouds so permit. They were trying to contact 171 or Tucupita’s Civil Protection and ask them to send an ambulance or a helicopter…anything.

The boy who was trying to send the message was just learning to use the small computer. He was shaking, sweat running down his forehead. After several attempts, he managed to open father Vilson’s Facebook account, but he didn’t know what to do, who to contact, who to ask for help from father Vilson’s wall. As soon as he «shared» the call for help, he saw that the image on the screen froze. The plant had shut down.

In the meantime, Vilson was doing the impossible so that they could travel in a boat.

He jumped from a small stretch of land to the wooden dock next to a shed. That is where they kept an outboard engine, fuel drums and other parts, all of them property of the religious mission. He took an empty tank and began to walk through the small village, asking the neighbors for gasoline. For a moment, he saw himself as he was at Mass, collecting from parishioners.

In the first house he passed by, they didn’t have a drop of gasoline. He had the same luck as he walked along the narrow, deteriorated sidewalk of Nabasanuka, while people looked at him shyly from their windows. Drenched in sweat, he finally arrived to a house that had a courtyard where about 10 drums could be readily seen. Vilson approached the owner and explained him the situation, but the dark-skinned, curly-haired man told him:

—I do have gasoline, but it’s for fishing.

On his return, half an hour later, empty handed, Vilson felt a strange silence that would not last long. Though still far away from the ambulatory, the woman’s wailing cries began to pound on the houses on both sides of the caño.

The child had died.

The helicopter never arrived, nor did an ambulance from 171 or Civil Protection. 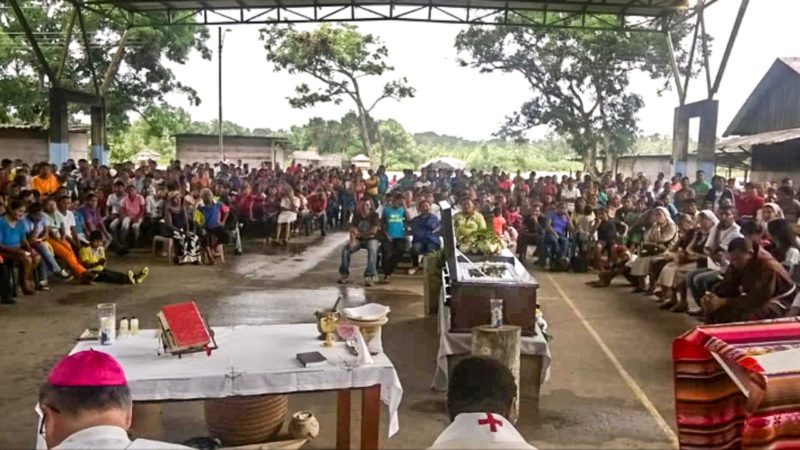 Vilson felt a jolt in his chest. He entered the ambulatory with his head down; the child was lying in a room, his eyes still open, his mouth too; he was probably crying for the last time looking at his mother.

The priest did not offer his condolences; it is not customary among the Warao. He only stood beside the mother and accompanied her in silence, praying on the inside.

That family had arrived from Morichito on a curiara [a typical Warao canoe]. They rowed for three hours, trying to save their son. Now they had to return with him a corpse. They wrapped him in sheets, prayed for a few minutes next to the priest, tried to eat the food they had been offered, and left.

On the curiara, the woman chanted and cried, as all Warao do, in a kind of ritual in which the mother remembers the best moments with her son.

—Mauka, mauka, sinakuare iji wabae, kajewitu ine jaiku ji isiko jao jao tanae. Jirima yabayaja tanae— (Oh son, why did you die? It was only yesterday when I rocked you in my arms while your father was fishing. Oh, son of mine…).

The curiara began to move across the gentle river whose waters also seemed sad that afternoon. It moved away, with the setting sun, as the mother’s cries faded and could not be heard anymore.

The alarm about the re-emergence of measles in Delta Amacuro was confirmed that morning of March 2018. That would be the first of 48 children killed in the four months that have elapsed since then. The disease has reappeared in three of the entity’s four municipalities and, for the most part, has infected indigenous children. Vilson Jochem’s accompaniment of the sick was just beginning. A few days later, his boat would inevitably become a boat for death, because it is in his boat that he has had to carry corpses to the cemeteries.

He has borne witness to the burial of one, two, three children, but the forest is immeasurable.

They Know the Restaurant Will Be There.
He Would Do It Again as Many Times as Needed
Those Were Not Belmer's Plans
Her Students Will Always Find Her There