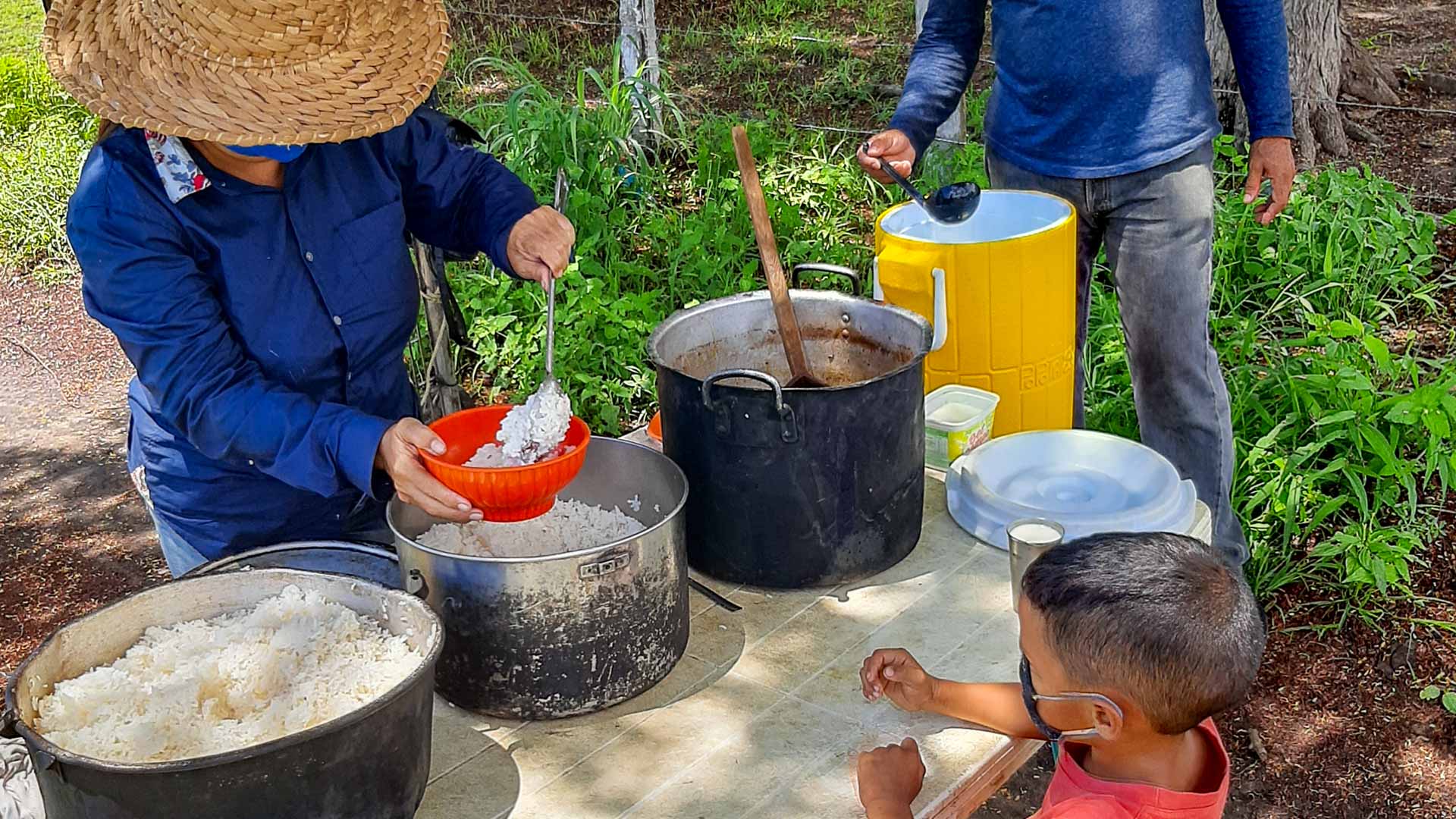 She Dreamt that a Line of People Was Waiting for Her

Hungry children in a classroom. Indigenous families in Delta Amacuro, in the eastern end of Venezuela, who only eat mangoes to make the little food they have stretch. A pandemic that is here to further complicate what was already complicated. Arlys Obdola transformed her business into a program that tries to mitigate the food crisis facing the country. 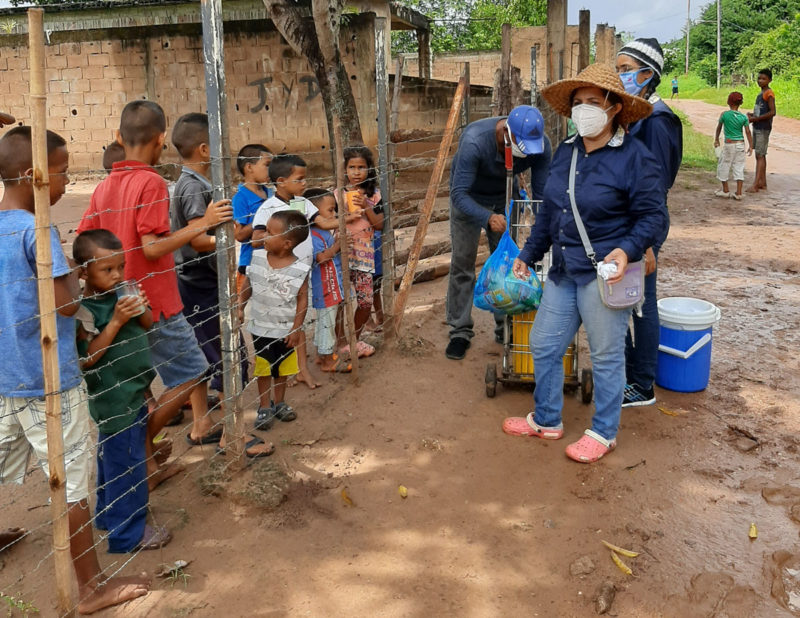 A hat as a crown; a wooden spoon as a scepter.

A group of children from Marhuanta watches a woman coming from afar, whom they see as their fairy godmother, wearing a round hat and waving a wooden spoon. They smile, ecstatic, as she comes closer, pushing a wheelbarrow with the ingredients for a soup that she will make for the people of this community in the Angostura del Orinoco municipality of the state of Bolivar.

The children run to greet her. They surround her and hug her. The children are either barefoot or wearing worn-out shoes, and are shirtless and with pants soiled with the dirt that is so abundant in the streets of Marhuanta. The neighbors around are also excited and ready to help prepare and pass the soup. . They do their best to make sure that as many people as possible get to eat. Because, for many in the area, a bowl of hot soup or some freshly roasted arepas will make a huge difference. Arlys is well aware of that. That is why, like so many times before, she is there.

Arlys Obdola used to be a teacher at the Angosturita II Educational Unit in Ciudad Bolivar, the capital city of that southern Venezuelan state. It distressed her to see children go to class with listless eyes, drained of energy, and lethargic, all because they hadn’t eaten anything. Teachers were asked to set up events, decorate billboards, organize traditional dances, and she complied gladly; but those emaciated children got her thinking. She knew they came from homes stricken by poverty.

Arlys felt that she was wasting a lot of time planning classes and sending the kids assignments that they would not be able to complete anyway. 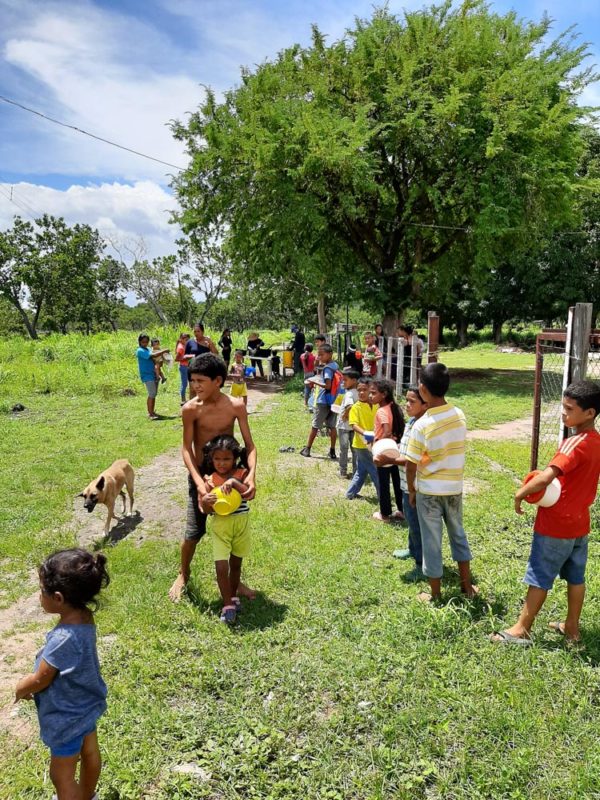 Who can perform at school without food in their stomach?

So, she started inviting the kids to her house, whenever she could, to offer them something to eat. She knew that her help did not solve their problem, but that was the best she could do. There were times when parents declined her invitation because their kids did not have shoes to wear or because their clothes were in poor condition. Some of them, she knew for certain, felt bad about receiving help without being able to give something in return. But, little by little, she gained the trust of them all.

“Miss, can I have a little bit of flour?” asked the children as they said goodbye following the meetings at Arlys’ house.

She shuddered at those words, ones that she would never forget.

And that feeling would be a force that would drive her a long way, even if she didn’t know it yet.

She began to offer them food to take home; not much, needless to say, because she didn’t have much either. She was the mother of two children and she could barely make ends meet with her salary as a teacher. That was in 2010, and one still did not fathom the crisis that was coming the country’s way. Frustrated for not being in a position to do more, she would ask herself how to help them better, and who to turn to, but she couldn’t seem to think of anything.

Some time later, in 2013, she decided to quit her job as a teacher because she had grown tired of it. She would pursue cooking studies at a culinary school and began to devote herself full time to Ricuritas, a business she had devised to make some extra money, where she prepared and sold snacks shaped like animals and small figures.

In December of that year, AVENEXT, an organization that provided assistance to impoverished communities in Ciudad Bolivar, invited Arlys, as the owner of Ricuritas, to take part in an activity where they cooked Christmas food for 13 families in need. That is when Arlys realized that Ricuritas could allow her to continue doing what she had wanted to do since she was a teacher: help others.

Soon, with the support of her youngest daughter, she began collecting food donations and organizing jornadas de alimentación, or food drives, in communities close to her house. The neighbors themselves became volunteers and helped prepare the soup and distribute the arepas. After a while, Arlys began to visit other sectors of Ciudad Bolivar, such as Milagro de Dios, Boca de Marhuanta, Cardozo, and Mayagua, and offered those who lived there whatever she could cook. She would get on public transportation units just to listen to passengers and watch them closely; she would approach some, talk to them. This helped her understand their reality and gave her an idea as to what to do.

That is how Ricuritas became popular.

She was quite familiar with the state of Delta Amacuro, in the eastern end of Venezuela. She was born 54 years ago in Tucupita, the capital city, and lived part of her childhood there with her parents and siblings. When she was a child, her father, who is now 87, taught her to reach out to those in greatest need, even (or particularly) in the most dire situations. As a kid, she didn’t get why her father encouraged her to share that much, but as she grew up she came to understand the importance of selflessness.

One day, it occurred to Arlys that she could cross the border of the state of Bolivar and go to her native Delta Amacuro. She knew that it was already an impoverished state, inhabited mostly by indigenous people, and that many might need her help. It was 2016. The Venezuelan crisis was already gushing out like a river that swept everything in its path.

She couldn’t afford to pay for a boat ride to go to the most remote towns in the Delta, but in Tucupita, with the aid of some acquaintances, she got on a truck that makes trips for a soup kitchen. The first stop would be the community of Pueblo Blanco, but she was advised not to get off there because, word had it, someone had died of hunger that morning and the locals did not want visitors around.

They continued on to Los Güires, another Warao indigenous community. She noticed that they didn’t even have a healthcare module, just as there were none in other towns in the area. On those road trips, she confirmed what she had already guessed: that the Waraos were eating poorly. She learned that many inhabitants of Los Güires, el Caigual, and Pueblo Blanco suffered from malnutrition, tuberculosis, anemia, respiratory infections, and frequent diarrhea.

She spotted men pulling down mangoes from trees, carrying them in baskets to their homes. Fruit was part of the staple diet of some of the families there. One day they would only eat mango; the next, they would prepare the little food they had been able to buy.

Arlys carried with her, in the truck, some ingredients and a pot to make soup. So, she set to work. She and other women in the area peeled and cut up the vegetables, and then handed out the broth. That day, right there, she remembered the indigenous people that she knew in her childhood, and how cheerful they were. Those she had before her eyes, you could hardly get a smile out of them, perhaps because they were hungry and lacked medical attention. 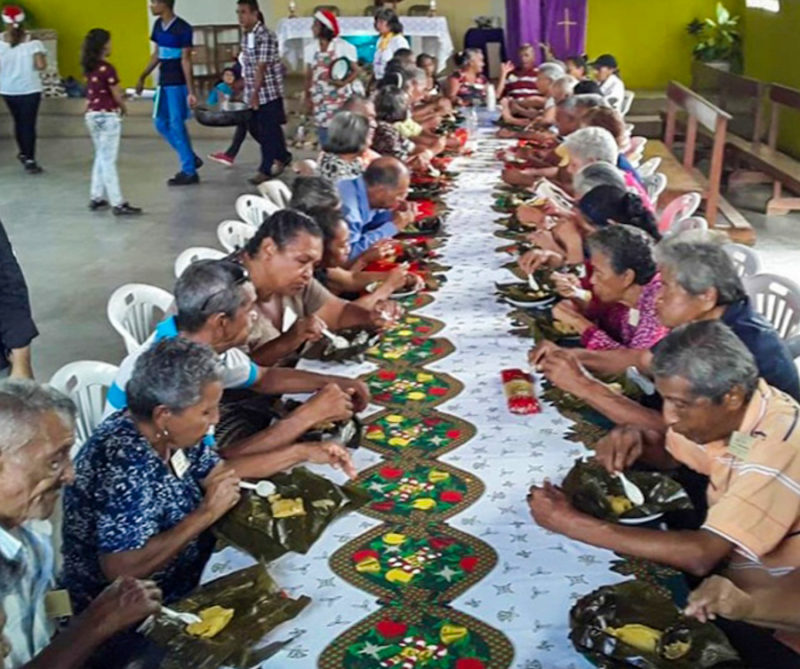 She began to make frequent trips to Delta Amacuro.

In one of those visits, Arlys and her team of volunteers organized an arepazo, or arepa day, for the Yakariyene community, who live right at the entrance of Tucupita. Some time later, she was spotted and recognized by some people from the indigenous community in the city market while she was trying on a hat made of a plant that the locals call boras.

They said hello and whispered some words to the storeowner that she couldn’t hear.

“The hat is yours,» said the salesclerk to Arlys, implying that she could take it without having to pay for it.

Now, every time she attends a food day organized by Ricuritas, she wears the hat. She calls it her «crown». And the «crown» would later match a wooden spoon, which became her «scepter». She likes to think of herself as the «fairy godmother» of those children who are so happy when they see her.

On one occasion, she brought food, candy, a piñata, and a bouncing house for the children who live near Caño Manamo. The little ones asked her to join them, and Arlys did, even though she no longer felt that young. They played for hours on the soft, warm sand at the river’s edge, as the sun was setting. 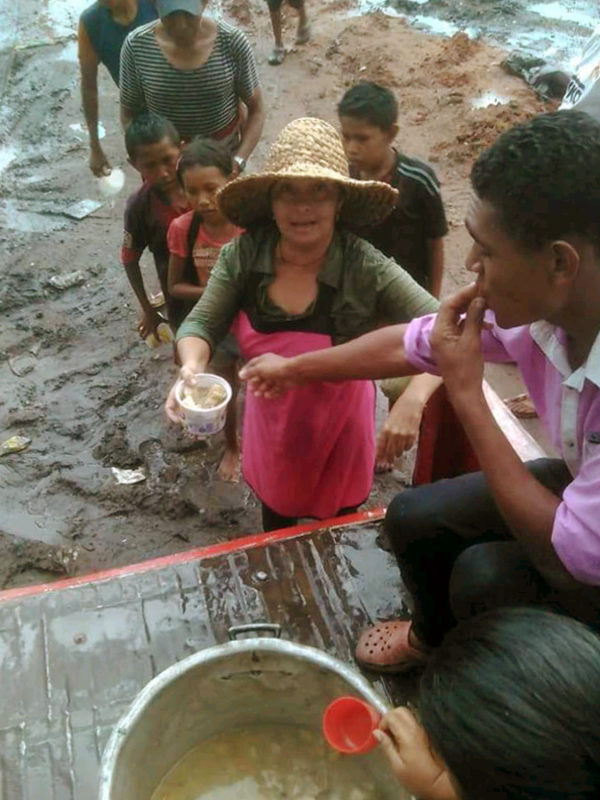 The COVID-19 pandemic came to further complicate what was already complicated.

Arlys and the team of volunteers from Ricuritas did not see how they could carry on with the work they were doing. They had to stop going to Delta Amacuro because of the fuel shortages, the movement restrictions during lockdown, the lack of cash, and the high prices of transportation fares.

To cap it all, in October of 2020, even if she had not been tested for the virus, Arlys began to experience the symptoms of COVID-19 and had to be kept in isolation. The first night, she dreamt that a line of people was waiting for her help outside her house. She had a very bad week, with a fever, dry cough, and chest pain. Being sick stressed her because she knew that lots of people were counting on the food she gave them.

When she recovered, they were able to resume their activities, albeit only in Marhuanta. . But they could not just stop and do nothing, partly because other organizations, such as Pintando Sueños [Painting Dreams] and One Milk for Venezuela, who provide financial support or contribute food and medicines, wanted to partner with Ricuritas.

According to the latest National Survey of Living Conditions, 63.7% of the population in the state of Bolívar is food insecure. Even a number of Ricuritas’ volunteers make part of this vulnerable population, which explains why some of them had left the area in search of better conditions in the countryside. Many people knock on her door asking for food; however, sometimes she has nothing to offer. 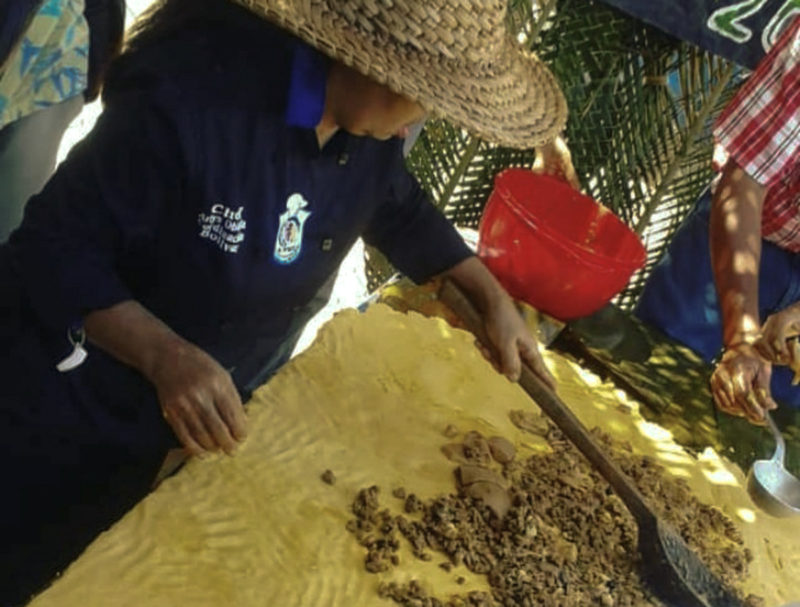 The food days have in no way come to a halt, but Arlys does not always attend because her body has not fully recovered from the days of high fever and dry cough. The Ricuritas team of volunteers has made sure that the children keep receiving a warm plate of food. And that fills her with satisfaction. 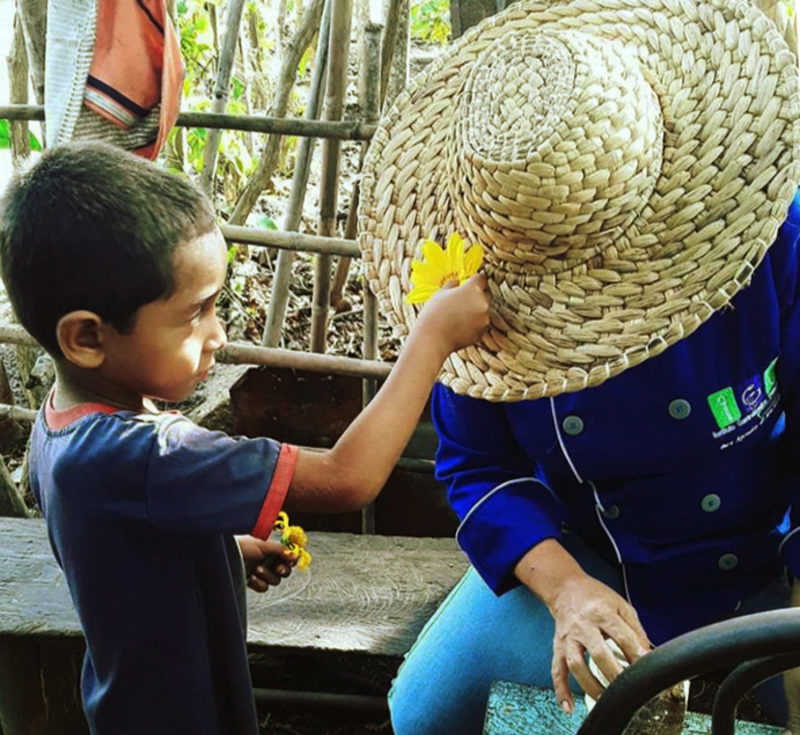 You Made Me Laugh. You Have Earned It.
Carlos, the Miles, the Waiting and the Respite
Something Had Made Us So Equal that We Didn’t Want to Go Back Home
Oscar Navarrete Has Not Forgotten How to Play to Win