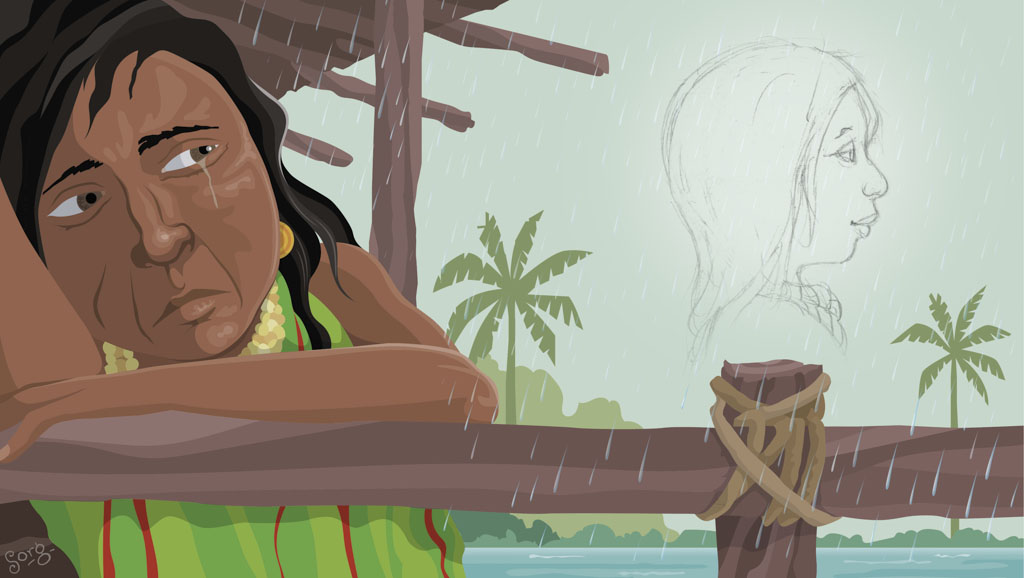 She Looks at the River Where Her Daughter Sailed Away

Marina lived in a remote community, deep in the jungle of Delta Amacuro. A three-month trip to Tucupita, the capital city, made her grow into an adult at the early age of 14. When she came back to her community, she started seeing a man she didn’t know, got pregnant and, four months later, went on a trip to the neighboring island of Trinidad. It was as if she had sunk into the water. 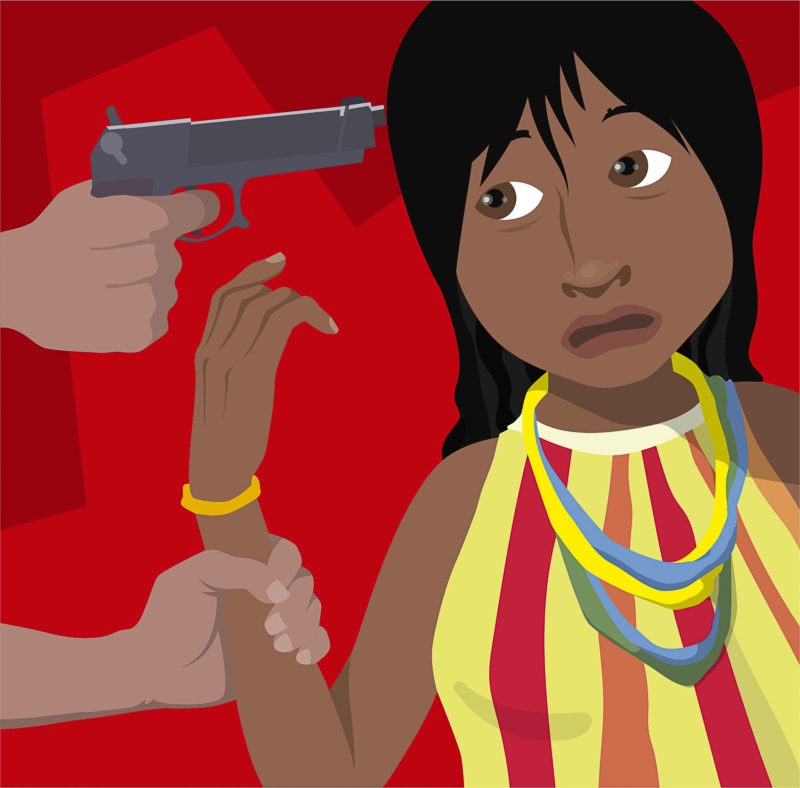 Soledad Marín sits on a stool that has turned black with the passage of time. Thick raindrops fall on the ceiling and make a sound that seems to be amplified by the depths of the jungle of Delta Amacuro, northeast of Venezuela. The roaring sound obscures the dim voice of the woman who says she misses her daughter, Marina, a teenager she hasn’t heard from in a long time.

No one knows what happened to her.

“Why didn’t she come back?” asks Soledad.

It is as if she had been swallowed up by the earth… or by the water.

Marina, her little girl, who was only 14, was four months pregnant when she last saw her. It was in late March of 2018. The girl woke up at 4:00 in the morning, before the sun had risen. It had rained all night long. Wrapped in the fog and cold, she hurried to prepare for the journey: once again, she was to leave for Trinidad. She cooked domplinas —a kind of bread made from wheat flour— on the fire. She made coffee and served it to her parents. She rolled up the hammock and packed some sheets, several changes of clothes and a pair of shoes. Protected from the cold by a black and yellow sweater, she took her bags and walked to the bridge that connects this wood floor house with the river. It was not even down yet when mother and daughter said goodbye in a close, deep embrace.

Soledad wanted to think that, just as she did before, her girl would return safe and sound. That it would be but another trip. And that, of course, she would get to know her grandson.

But she had a bad feeling. And they say that mothers are never wrong.

The boat was set to leave. A young man from the community and three Trinitarians were waiting for her. One of them was her partner, also known as El Inglés (the English) [1][TN]. From that point in the deltaic jungle —eight hours from Tucupita along the Orinoco River—, they would travel the three-hour stretch of a mix of fresh and salt water to the neighboring island of Trinidad.

As soon as she boarded, they left. The noise of the engine faded into the distance, while the waters calmed down.

And Soledad Marín saw her sail away.

[1] Translator’s Note: According to the author, the Warao called him El inglés (the English) because of the language that he spoke and not because of his origin. 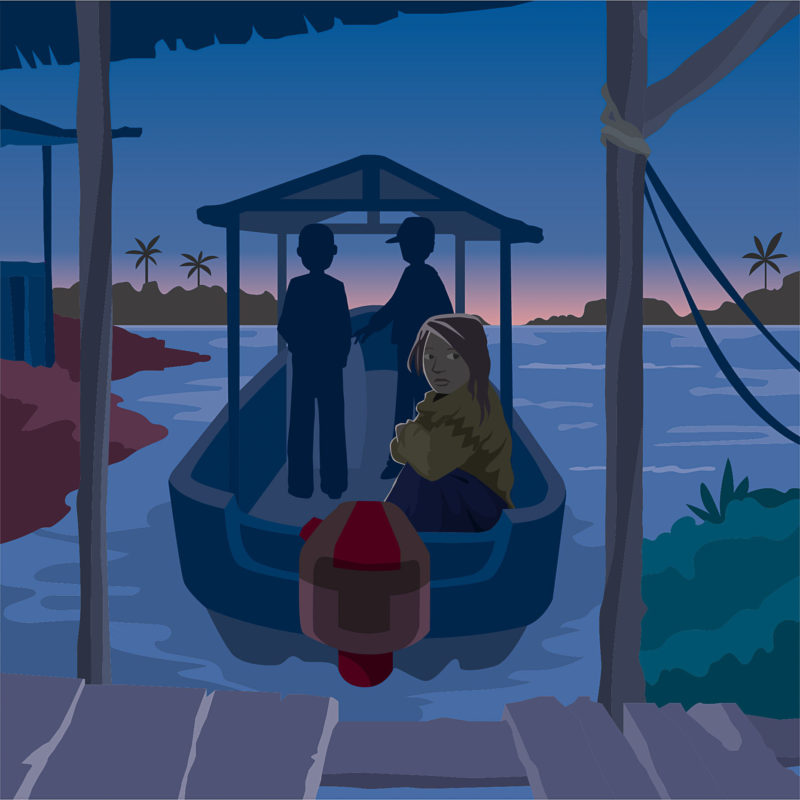 “She was happy because she was going to buy clothes for the baby.”

The fire, lit in the back of the house, exhales the typical smell of smoke. There are old pots stained with charcoal, and several hammocks. In one corner, an old parrot called Kaunu repeats every word he hears. Soledad is wearing a green dress, with red fabric patches, a necklace made of seashells and bright mustard-colored earrings.

The baby that Marina carried when she left was the son of a man she didn’t know well. The relationship between them was still in its very early stages. They had started seeing each other in December of 2017, and that same month she got pregnant. There was no courtship as such between them, not as it is understood in the Western world. She was just a teenager. El inglés agreed with Soledad and her husband that he would live with their daughter without marrying and that, in exchange, he would give her a better life: he would take her to Trinidad, where she could stock up on food that was so scarce there. And he would give them money, which they also needed a lot.

That is how some things are settled in these faraway corners of the country.

Marina did not object. Thus far, she had been a quiet girl who was seen playing with her friends. Together, they spent their time bathing in the water currents of the Orinoco Delta and crossed its streams in curiaritas or small boats, hurling sticks at the trees to knock off fruits from their branches. It is true that she lived a life of deprivation, but she seemed happy.

She went to one of the three schools in the intricate area, very close to the Atlantic Ocean. Most of the people there belong to the Warao indigenous ethnic group. She almost invariably had to get up very early in the morning, before sunrise, because there were no outboard motors available and that complicated transportation to school. So, she and several students decided to join and row there on a wooden raft. It took them an hour and a half to get to the educational center.

Marina’s family had lived from hunting and fishing. But the abundance from the rivers and wildlife had been stricken a blow by man’s hand and trade was no longer so profitable. Thus, Marina’s father decided to leave the forest and go to Puerto Volcán, in Tucupita, to work as a docker, which would earn him more money. It would only be for a few months, just to see how he would fare.

They lived there for the first three months of 2017. Everything there was different: certain precautions had to be taken, because there were gangs in Puerto Volcán that openly engaged in smuggling and traded in prostitution. And it was there that Marina, at the age of 13, met Wilmer González, who many say is the czar of gasoline and weapons smuggling in a huge network whose international points of connection are camouflaged by bushes, roots and tall trees along the 3,600 streams of the Low Delta.

Perhaps it was her days at Puerto Volcán that made Marina turn into an adult before her time. That’s what Soledad thinks. When they returned to the forest months later, the girl was another person. She behaved differently; she was kind of putting on airs, and it was not like her.

As soon as she got there, she began to engage with Trinitarians who for years had been prowling the areas inhabited by the Warao and exchanged with them wheat flour, corn flour, tobacco, rice, sugar and liquor for gasoline and lubricants for outboard motors; they also distributed marijuana and cocaine. One of them was El inglés, with whom Marina had become involved in a relationship with her parent’s approval.

At first, everything went well between them. They made one, two, three trips to Trinidad, always by river. The young woman returned happy, with new clothes and large amounts of food that she shared with her family. They could finally alleviate their hunger a little. But things between Marina and El inglés would soon deteriorate… perhaps too soon. They were constantly arguing. And for no reason.

The man would drink in the house. He organized parties that lasted all weekend long and would even go on until Tuesday or Wednesday. He was almost always drunk. Marina, now a housewife, spent most of the day in the kitchen and doing housework and chores.

Sometimes, when drunk, El inglés would turn violent. He would take out the gun he owned and kick his own guests out of the house. And he would throw out Marina too. Everyone would leave in terror, confronted with such an excessive and unreasonable behavior.

That’s what happened two nights before the fourth —and last— trip.

While she kneads corn flour to prepare arepas, Soledad looks from the inside of the house into the river where her daughter sailed away. Her eyes are filled with sadness, and memories fall into her mind like a waterfall.

“That night, El inglés, having drunk a lot of alcohol, took out his gun —a black Beretta—, blew into the barrel and threatened the family. There was no reason for him to do that, but he was out of control, so he didn’t seem to need one. Marina was crying. The man didn’t shoot; instead, he ran to the bridge that connects the house to the river and boarded his boat. He started the 75-HP outboard and accelerated abruptly. When everyone thought that everything would go back to normal, he came back. Three hours had passed.

Marina was sitting on her hammock with both feet touching the floor’s wood, barefoot, and tears still rolled down her cheeks. The Trinitarian, without saying a word, smacked her. He drew his gun again and pointed it at Marina’s temple, as her parents looked on, uncomprehendingly. The young woman thought that he would pull the trigger, that he would kill her, so she tried to run, to run away at full speed from there, but her body did not respond. She was petrified. And she cried again.

“Don’t do it, daughter,” the father said.

But she would not listen to them.

“She was afraid. I don’t know if she thought that she could travel and come back with any problem, but she didn’t say a word. She left. That day I gave her that hug on the bridge and I saw her go away.” 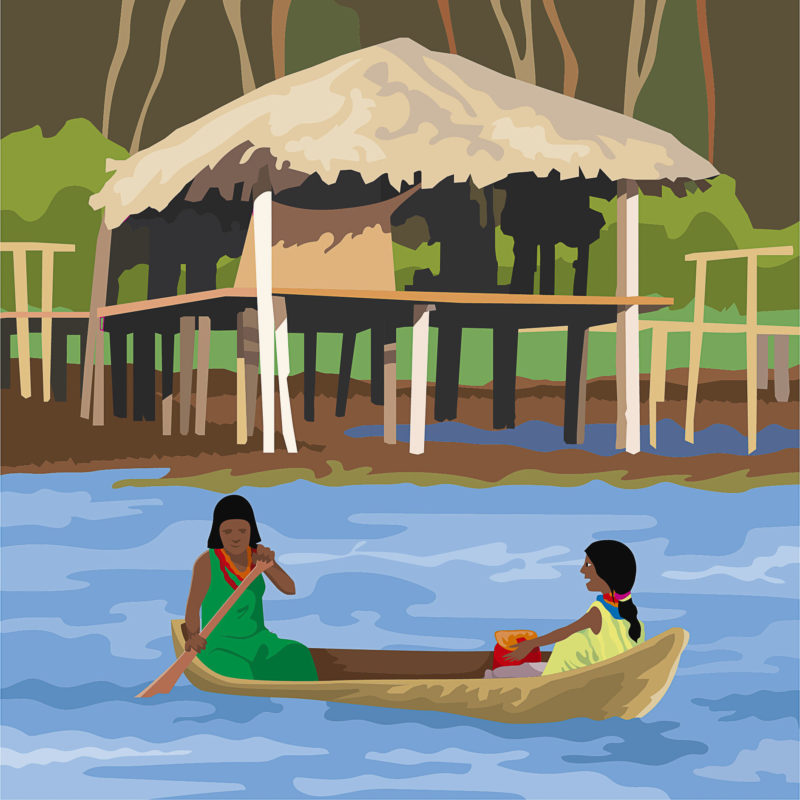 Time has passed. Soledad’s grandson was born in September of 2018 and she doesn’t know him. But news of her daughter has arrived. Not the ones she would have wanted to hear, but at least she is not hanging in that void anymore, in that uncertainty that burned up her days.

Marina had not been swallowed up by the earth or by the water: she was in Trinidad. Safe and sound, but she was in a detention center for minors. A commission of the Trinitarian police had arrested her in a country house and had seized her weapons and dollars whose origin she could not explain. She was released months later. Is she with her baby? Is he walking already? What happened to him while his mother was in prison? Will she want to return to Venezuela?

The names of the characters were changed to protect their identity.

[1] Translator’s Note: According to the author, the Warao called him El inglés (the English) because of the language that he spoke and not because of his origin.