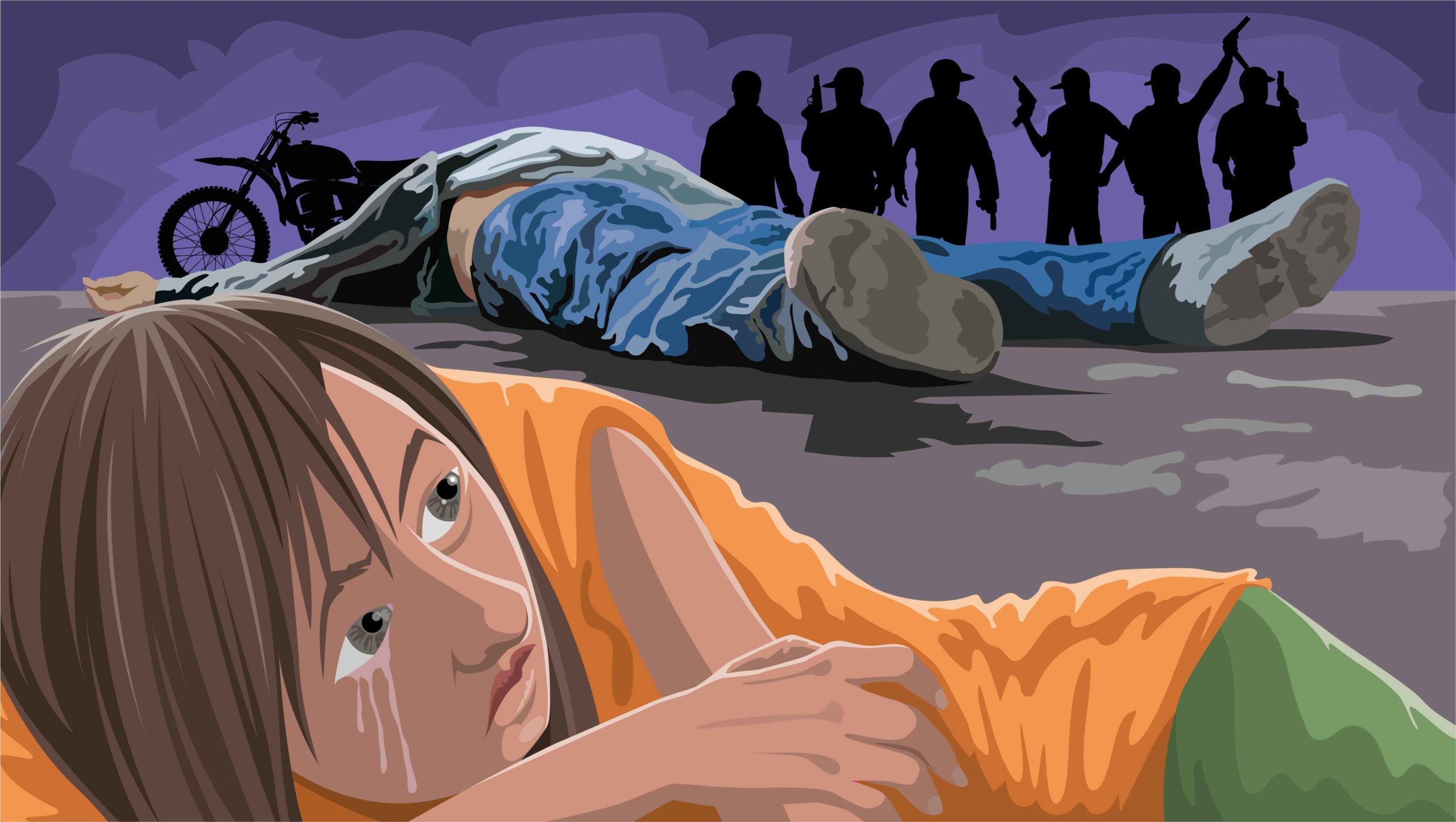 The Forced Exile of the Perdomos

After one of his own was murdered, a gang that imposes its form of law in a sector of San Felix, in the state of Bolivar, decided that Oscar, an officer of the Municipal Police of Caroní, could no longer live there. When he had the audacity to set foot in its streets, they killed him. And the entire family has been forced to live a completely different life ever since.

Oscar finished his patrol shift after 10:00 pm and went on his motorcycle to pick up his partner in the slum where they had lived together until a few weeks ago. He thought it would only take a few minutes. Just enough to collect her and head together to their new home, where they would be safe.

As a Caroní municipal police officer, Oscar took the death threat he had received very seriously. That is why he decided to move from that slum in San Felix, in the state of Bolivar, where he had been living with his life partner for a year. But on March 23, 2018, she went to visit her family, the Perdomos, who had been residents of the sector for four decades at that time.

The woman’s presence alerted the armed criminals who had it sworn to Oscar. And as soon as he entered the site looking for her, four men rushed and pounced on him: they beat him up and pushed him into the garage; they did the same to her. They got her down on her knees, grabbed her by the hair and forced her to see a macabre scene.

—This is so that you don’t forget that we don’t want policemen around here—, they said, pointing at Oscar’s head.

Then they fired 12 shots.

She yelled and screamed. The gunshots and the screams echoed throughout the community.

And the men fled, taking with them the motorcycle and the gun of the murdered policeman.

Less than two months earlier, more precisely on January 30, two members of the Caroní Municipal Police’s Cycling Brigade clashed with seven members of the gang of ‘El Yordi’ at the Chirica Municipal Cemetery in the center of San Félix. During the scuffle, some barricaded themselves behind graves and trees. The police left unharmed, but the members of the criminal gang did not: one of them died of a gunshot wound to the chest, while the other six managed to escape towards the Caroní River, the long tributary that runs through those lands in the south of the country.

Oscar Colmenares, a 26-year-old, dark-skinned, dark-eyed man, had been a member of the motorbike brigade of that law-enforcement corps for a year. He did not take part in the operation against the thugs, but ever since that day, his uniform became his death sentence. The gang, which imposes its law on all that territory, ruled that neither he nor his family could ever live in that area again.

If he stayed, he was a dead man. Period.

—They’re going to kill me if I don’t move as soon as possible—, he told his boss on February 1.

—Then move, quickly—, he replied.

Oscar began to feel as though his job, which was to fight crime, was of no use to him: those crooks had control over his life. Then he realized that this is how things work in that city, one with a homicide rate of 81.48 per 100,000 inhabitants, homicides that mostly go unpunished. That’s why he moved. And maybe he would still be alive, had it not been for the fact that less than two months later he set foot in the area again. Way too soon for a death sentence.

It was a mistake that the gang of ‘El Yordi’ wouldn’t forgive him: nor him, nor the Perdomos. 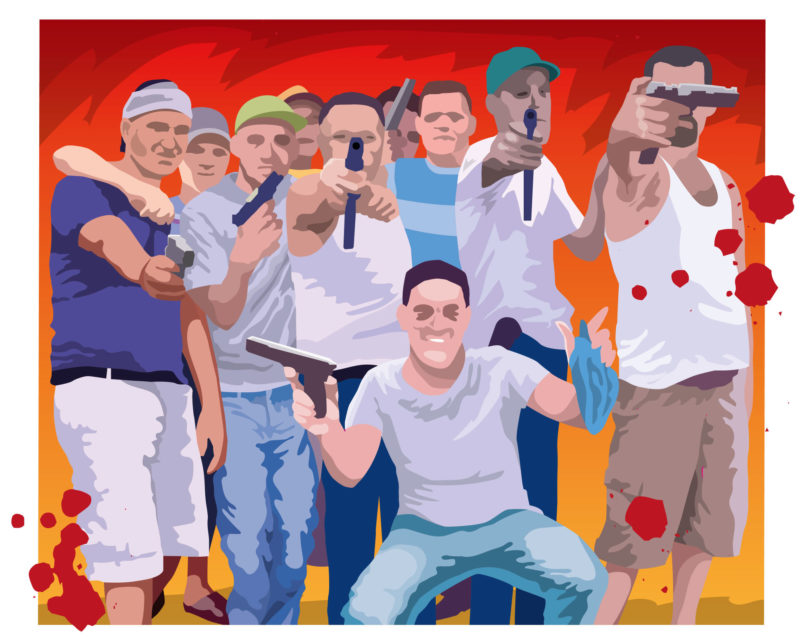 She wants her name not to be mentioned in this story, because that fateful memory kills her with pain and because, above it all, she is afraid, very afraid. It has been too many tragedies together. She doesn’t want one more. She thought that Oscar’s death was the worst thing that could happen to her, but she was just beginning to mourn that loss when she had to face others.

It was March 26. Three days had passed since the murder. She was just beginning to grief when, at midnight, a loud scene was heard outside her house that forced her to look out. She does not know how many people there were, but she is sure she saw a lot, almost a multitude. There were men and women. Young as well as old. The crowd was her own neighbors. Yes, her own neighbors wanted to set her house on fire. When she saw them, she was certain that they were acting fueled by the gang of ‘El Yordi’. Everyone in the family knew that they were related to the criminals.

She also noticed something else: witness to all the commotion in front of her house was a Bolivarian National Guard patrol car, but with no officers in uniform.

She was in the house with her parents, who are over 60 years of age, her sister and her 6-year-old nephew. And she called the police, deeply distraught.

—They want to burn our house down! They have already pulled a power cable out and there was a short circuit! Hurry up!  They have gasoline and everything! There are many of them and they say they are going to kill us!

It was an officer of the Municipal Police of Caroní, a former partner of Oscar, who received the call.

The policeman moved all the resources that he could to help the Perdomos.

The officers shot into the air and beat several of them. They took away the gasoline and prevented the fire. Six people were arrested. Among them were two active officers of the National Guard with their partners, who were preliminarily charged with attempted manslaughter, although later a preliminary proceedings and supervision court in Puerto Ordaz released them on condition that they report to the court on a scheduled basis.

Perhaps ‘El Yordi’ has not unleashed his fury against the military because, so far, none of them has killed any of their own. Now, why were there guards actively participating in the attack? This is the kind of questions that will never be answered, since neither the authorities, nor the neighbors, nor the Perdomos want to say a word. No one. Their voices are silenced by fear.

According to the Scientific, Criminal and Forensic Investigations Corps, the gang engages in vehicle theft, extortion and kidnapping. But there is another version that no one dares to yell out in connection with this story. An intelligence officer of a law-enforcement agency explains it, also under the condition of anonymity, because he too is afraid; he knows what ‘El Yordi’ and his people are capable of. This version says that this group arrived in San Felix at the end of 2017, having been displaced by the Army from one of the gold mines of El Callao, further to the south. For years now, people have lived there under the law of para-police cells that profit from illegal mining and impose their authority at bullet point. And that, he insists, is what they are trying to do now in San Felix. 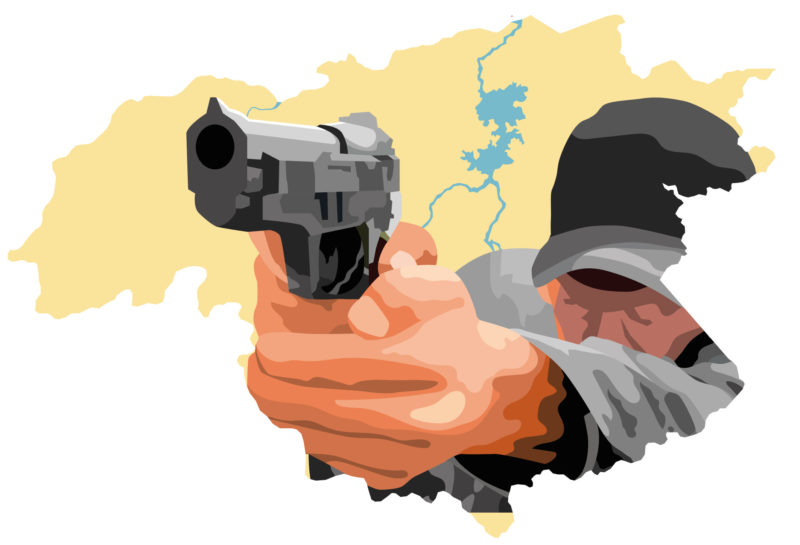 On the night of the thwarted fire, the four adults and the child had to go to the Nueva Chirica Police Coordination Center, the main police station in that parish of San Félix. For three days they had to sleep in the bunk beds set up by the police and share a single bathroom with more than 10 on-duty officers.

Since then, the Perdomos have been living in another city. They pray that no clues leak as to their whereabouts. ‘El Yordi’ has sent them threats: if they are ever seen again in the area, they will be chopped to pieces for having called the police to prevent the fire and for having testified against them.

Four months after Oscar’s murder, the National Guard captured one of the four involved. The authorities did not reveal his name. The other three are still at large. But the Perdomos have changed. They are trying to build a new life away from their neighborhood. Far from violence. Every day they commend themselves to God so that the gang of ‘El Yordi’ will not find them. Not only did he take the life of a loved one: he also took away their day-to-day way of life. They no longer wake up in what was their home for 40 years; they don’t use the things they bought through a life of work and efforts; they don’t have the same routines; they don’t share with the same people. Theirs has been a forced exile within their own country. An exile in which the only border they crossed was that of death certain.

The name of the murdered policeman was changed at the request of the family.