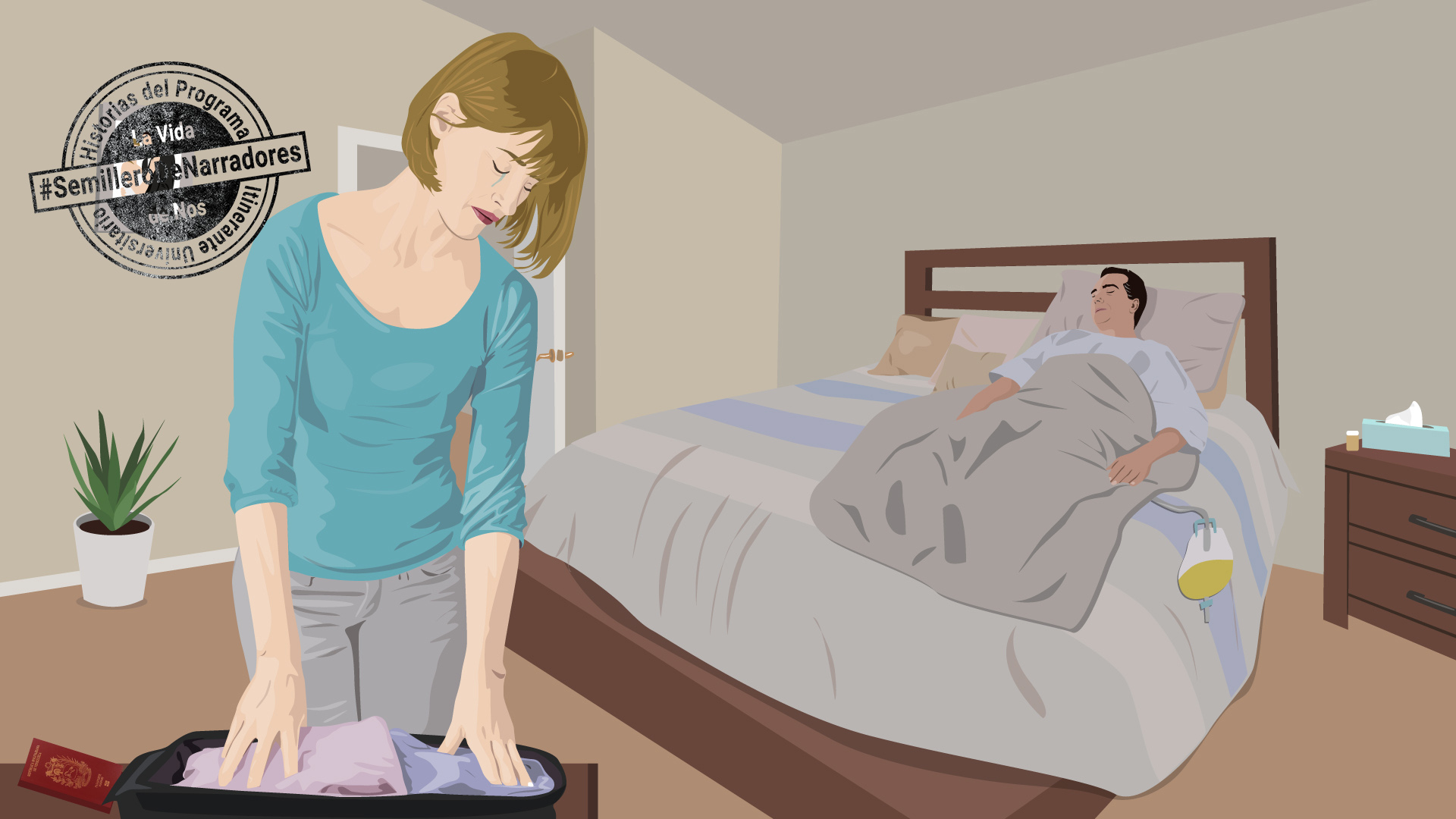 Pablo suffered from hyperplasia of the prostate gland, a condition that caused him excruciating pain. The drugstores had run out of the painkillers that could provide him some relief. He needed to have surgery, but the family could not afford to pay for the operation. That is why Angélica, Pablo’s wife, decided to catch a plane to the United States. She would work there and try to raise the money they needed. 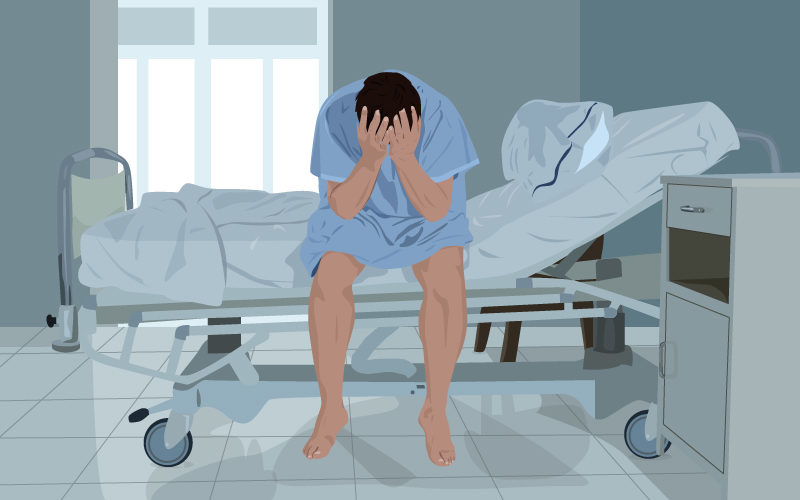 Before take-off, she was quivering, moved by that outpouring of nostalgia, fear, and frustration. When the plane took off, she had a feeling that she was changing the course of her life. Strength, which she attributed to faith, took hold of her: she would work tirelessly, as she was convinced that she would return with what was needed to help her family.

She was leaving behind not only her children and her husband, but also a whole life of work and effort.

Up to two years before leaving the country, Angélica  worked as a goods and services purchasing analyst in the Electrificación del Caroní (Edelca) power company, which would later be absorbed by the Corporación Eléctrica Nacional (Corpoelec) state-run operation. She performed as such for 19 years. She graduated from the Guayana National Experimental University as a bachelor of business administration. Before Edelca was nationalized in July of 2008, she earned a salary that bought her a house in one of the best residential areas of Ciudad Guayana. Those were good times: times of financial rewards, salary increases, bonuses… It was a prosperous period where she was able to refurbish her house, buy a car, and pay for the college for her three children.

But life began to change for her after the nationalization of the company, and she could no longer afford to pay for many of their comforts. She felt helpless.

And even more so when the family was confronted with a very difficult situation: in 2016, her husband Pablo was diagnosed with benign prostatic hyperplasia, which is an enlargement of the prostate gland. At the beginning, it was not that serious and he would get better at times, but then he would deteriorate substantially. In November of 2017, Pablo got worse: he had to be taken to the hospital and administered drugs via a catheter to relieve the agonizing pain he was experiencing.

The doctor told them that Pablo had to have surgery at the earliest possible moment. That meant that Angélica  had to find the medicines and the money for the operation urgently. At the time, it all amounted to US$ 2,500.

“We looked everywhere and could not find the drug to treat the inflammation, or if we found it in one of the many pharmacies we searched every day, it was too expensive. I just couldn’t pay for it. My husband was sick, confined to bed, unable to walk or work… And I had no way to help him, no matter how hard I worked or struggled to find the treatment for him.”

Angélica began to consider other options, thinking about what else could be done. Some relatives said they could have Pablo operated on through the state-owned oil company PDVSA, but he was one of 400 people on the waiting list and they were to purchase all the supplies that the surgery required. Her husband was in pain every single night and could not even walk because of it, so she had to help him move around. He was losing more and more weight and was getting weaker. They didn’t have the money to pay for the operation and couldn’t find the painkillers to relieve it either.

Some friends of Angélica who had left for the United States began to recommend that she go work there, given that she had an American visa. That way she could get the funds they needed. She had many doubts, but the pain that her husband was enduring finally made her take the decision: she would go to the United States.

Initially, she had to resort to producing false documents if she wanted to work.

She started with jobs that were very demanding physically, a far cry from the clerical work she used to do at Corpoelec. As a hotel maid, she had to mop and dust. She cleaned rooms nonstop. On her second day there, she only looked at her watch once: the moment when she felt dizzy. She thought she would faint. It was 2:00 in the afternoon, and she had not even had a glass of water. 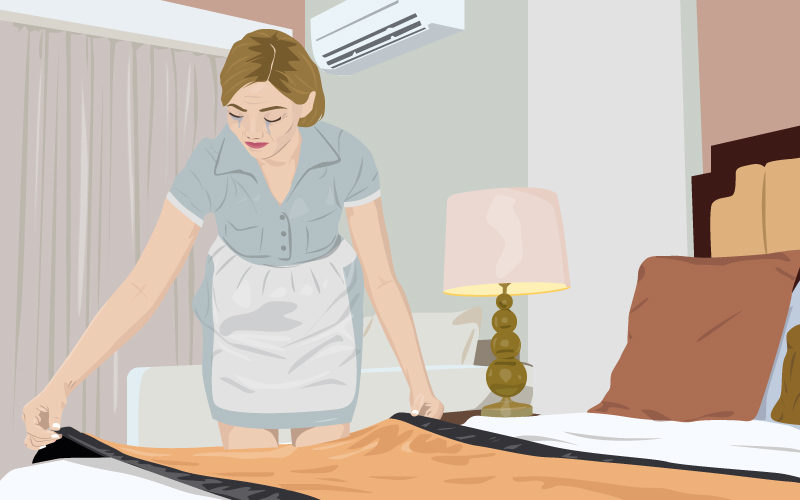 At first, it would take her two hours to clean a room, and she was supposed to do in thirty minutes! So she didn’t have time for anything else. As she cleaned, she would think that she couldn’t stay there for much longer. She had to find something better.

Angélica worked in that hotel for two months.

Then, one of the people with whom she shared a rented room mentioned Chicago, Illinois, where there were more employment opportunities. Angélica  decided to give it a try and left. She rented a room, which she did not have to share with four other people. Then she got a job at a food-packing company. She found the atmosphere much more pleasant there. She stayed for a while.

Within a month, she felt she had found some stability in Chicago. There was an apparent tranquility to her life. She was sending money to her family. Everything was going according to plan.

Until June of 2018, when her husband relapsed.

Pablo’s prostate was too enlarged. He had to be taken to a public hospital.

“My dad was screaming in pain, desperate. He was looking pale. And one feels so helpless because there is nothing there; you are at a hospital that does not even have the basic stuff to treat patients,» recalls Daniel, their youngest son, who lived with Pablo.

Pablo spent two months with a catheter placed in his body. He was lying in bed, could not walk, and needed more meds. Thus, Angélica had to find a second job and was now working a total of 16 hours a day. That was the way she could pay for her expenses and still be able to send money to Venezuela…and to put money aside money. Her goal was still the US$ 2,500 for the surgery.

The hardest part for her was to think that her husband was sick and she was not in Venezuela with her family. She was tormented by remorse because she was not there by their side.

Her children did not have it easy either. Although Angélica sent them the money, the drugs were difficult to find in Venezuela. They sent for them in Colombia. They tried to bring them from the United States. The crisis was weighing them down as much as it did their mother, and they had to put on a brave face before their father, who was living through days of extreme pain.

The days passed in the throes of such emotional exhaustion, and Angélica managed to come up with the money. But the procedure had to wait until the children could find the medical supplies, which were scarce in the country. Eventually, they managed to secure them. 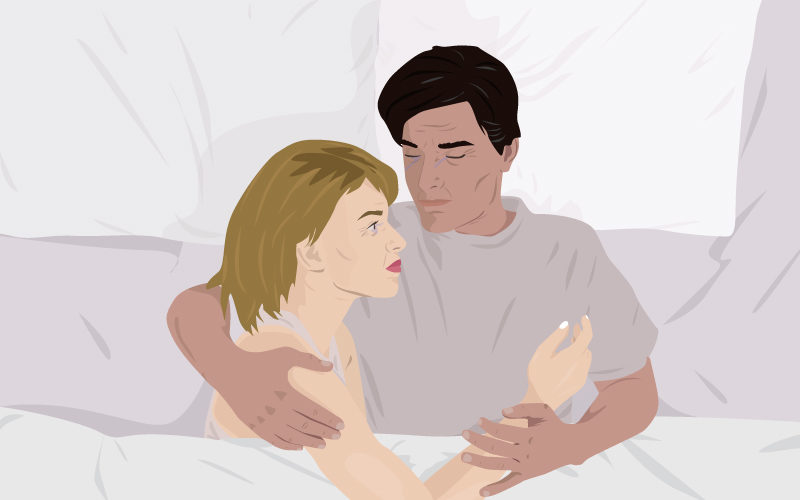 Angélica returned to Venezuela in July of 2018 to be with her husband. She could hardly wait to hug her kids. She still tears up when she looks back on that moment.

“When I arrived, I found Pablo confined to bed, with tubes around him, with dark circles under his eyes, haggard. He had lost a lot of weight. Seeing him in that condition was like taking a blow that knocked me out. I laid down next to him, and we cried. We cried for hours without saying a word because, after so many months, we were finally together. I cried because seeing him like that broke my heart; but, on the other hand, I was back and I had brought with me the possibility that he could have surgery.”

The procedure was performed on August 14, 2018. It was a success. And his family could finally take a break from those months of distress and suffering.

Angélica returned to the United States. Her legal documents are in order. Her husband is still in Venezuela, but Daniel, who went to Chicago to with his mother, is no longer by his side. The two of them work to pay for the apartment where they live and to save up money. Angélica and Daniel plan to take Pablo to live with them in a short time. They cannot wait to reunite their family in that new place that is their home now.

* The names in this story have been changed to protect the family’s privacy.

He Understood the Wind Will Not Change
He Said We Would Watch Him and Mom Grow Old
Her Students Will Always Find Her There
Carlos, the Miles, the Waiting and the Respite