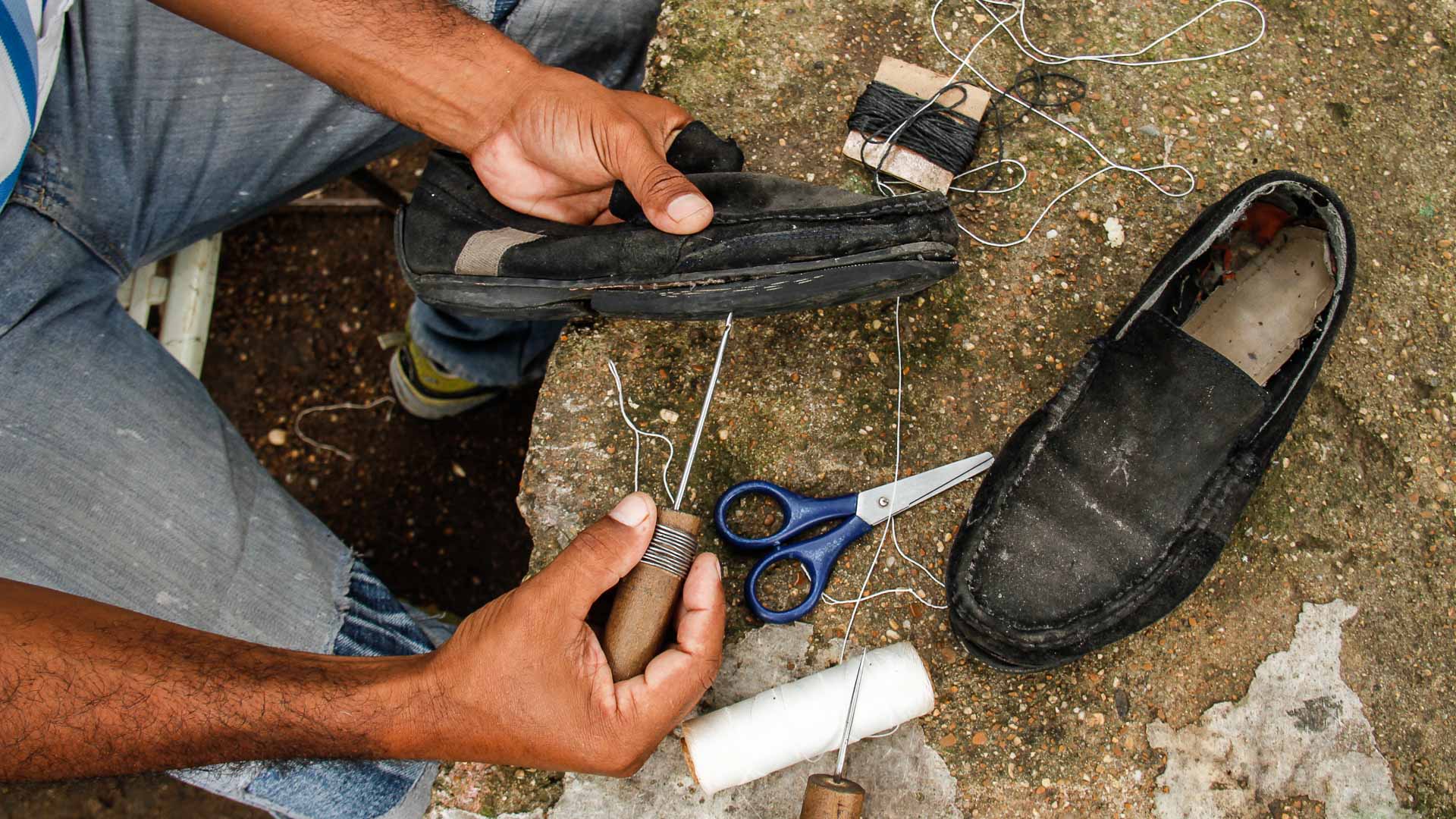 The Most Important Shoes for the Cobbler Daniel

Daniel is a Venezuelan security guard who learned how to sow shoes. He lives in Maturin, once a prosper oil production region. Most of his customers are inhabitants of the neighborhoods that he tries to keep secure, impoverished after the economic debacle that ravages the South American country. After his two teenage sons were killed by police officers, he took refuge in repairing torn shoes, trying to keep him away from his great sorrow.

Daniel holds a pair of worn out shoes. The soles are barely attached, two or three more steps and they will fall off. He sits at his house’s patio, under a tree that offers him shade. There he spends hours sewing shoes affectionally. He lives in Maturín (east), capital of Monagas state, once a prosper town due to oil exploitation.

He learned the craft by watching others. Practicing. Step by step. And then repairing shoes became an obsession. He sewed them with devotion and care, again and again. He began the craft in the midst of a great pain. After the death of his two oldest sons, Daniel decided to dry his tears working to try to ease his depression. This is how he became an expert in «patching» old shoes, which also served him as a new money income.

—I started working when I was very young. Since I was 18 years old —he told his teenagers sons, Gabriel David and Daniel Esteban, who is also known as «El Gato» (the cat), as the family nicknamed him due to his striped eyes.

One was more restless than the other. They were different, but always very close. They were 16 and 17 years old. They moved around. They had that teenager drive that seeks independence, that make some children grow when there are still a long way to become adults, explains Daniel as he tries a new patch.

—I would have liked very much watching them become adults. Tomorrow «El Gato» would be turning 17 years old.

But neither «El Gato» nor Gabriel reached adulthood.

It was one morning on March 2016 when he saw them for the last time. They used to sleep one next to the other. In two of the four beds inside the room they shared with their other two younger siblings.

That day he did not know why he had that odd feeling. He felt cold, afraid. It was like something creeping inside his stomach. He told his wife:

—I feel a sort of fear! As if something bad is going to happen.

—Oh, no, man, stop attracting those bad energies. What can happen? Get rid of those thoughts.

And so, he did. He got dressed, took his stuff and headed to the bank. He needed to withdraw some money for some shopping, and then he would return home. However, despite his wife encouragement, fear did not leave him alone. Negative thoughts haunted him. While walking he tried to look at other people to take his mind off those thoughts. He wanted to get rid of that sensation of terror he felt in his stomach.

Later he would understand well what it was about. «I know now what that feeling was about. You do not believe it until you experience it. Death speaks to you. That day it spoke to me.”

They were good kids. Prankish, restless, not bad. But that day they were in the wrong place. This is how Daniel remembers it. By that time, the crisis had already overcome the country. Were the early days of the economic storm that batter the Venezuelan people. «My earnings were not enough even to buy a can of Nenerina (a cereal mix to feed babies) for my youngest daughter who had just been born,» he recalls.

He sacrificed family time for more labor hours. There was no space, nor time to talk. No matter how intense was the working day, earnings were always too low. It was not enough to buy food.

It had not always been like this. Well-paid jobs were available, it was a country of opportunities allowing him to support his family and provide his children with a childhood without shortages.

—Let’s go for another ride, dad! —Gabriel David and Daniel Esteban said excited when, during their childhood, he took them for a car ride.

During Maturín’s «oil boom», electric trolleys where the craze for children and public squares were filled of those. The Venezuelan northeastern city was transforming. Its inhabitants were beginning to experience the bonanza of the black gold. The discovery of the El Furrial oilfield in the 80s, (El Furrial is a very promising oilfield, whose oil reserves are said to be the biggest and richest in the world) propelled growth in a short period of time. Drills, companies and investments were coming. The oil was making that serene little town look more like a city. El Furrial oil prospect was so promising, that by 1998, 453 thousand barrels per day were being pumped out. Also new oil fields were discovered, such as Santa Bárbara, Jusepín, Carito and Quiriquire.

Until the crisis showed up. 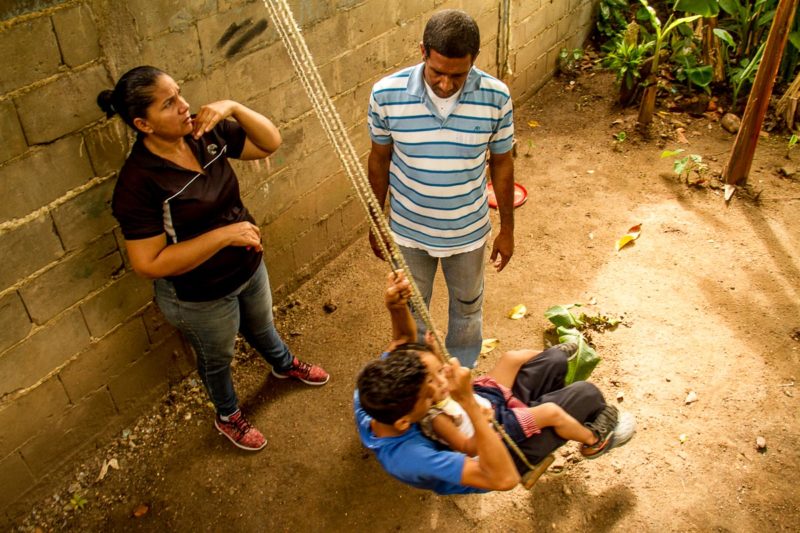 On his way home, Daniel received a call. He couldn’t understand who was calling. The voice sounded anguished. It was the husband of a niece requesting him to go home as soon as possible. His two eldest children were missing and the neighborhood was in turmoil. During a police operation two teenagers and a 12-year-old boy were killed.

Venezuela is one of the most violent countries in the world. According to the Human Rights NGO Observatorio Venezolano de Violencia, only in 2018, 23,047 people were killed, of which almost a third part died at the hands of state security forces.

That day, Daniel arrived tormented by the haul of the sirens. Patrols, policemen and neighbors crowded together. He made his way as best he could. People watched him, but nobody spoke to him.

There was blood and a police yellow tape blocked his way. He felt as if a stone was pressing over his chest. He was afraid to ask, imagining the answer.

—Daniel! your sons, Daniel! Two of the victims are your sons.

After listening to the news, he collapsed.

He does not remember who gave him the bad news. He was unable to say among all those many faces he saw that day, but that voice continues to resonate in his head from time to time. As if it whispered in his ear. Did it was death? He still asks himself. «Yes, it was death who spoke to me,» he replies.

To escape his thoughts, Daniel took refuge in his sewing shoes craft. It’s his way of tricking his mind. Or at least that’s what he believes. That pain of that day suddenly haunts him, without warning, almost daily, especially at night. He tries not to be idle. «When you’re doing nothing, you think, think a lot and the pain comes back.”

Now he spends more time at home. His new job allows him to devote more time to his family. Exactly 15 days has passed since the birth of his youngest daughter when his two oldest sons were killed. He clung to her and to his other two kids.

Most of his orders come from the neighborhood where he works as a watchman: El Faro. It is located in the heart of the Maturín Industrial Zone, where most of the oil companies settled during the time of bonanza. This middle class’ suburbs accommodate many of the employees of the state oil company Petroleos de Venezuela (PDVSA) prior to the crisis. Now, in the midst of a hyperinflationary vortex, that began in 2017, many of «the oil workers» go through life with torn shoes. 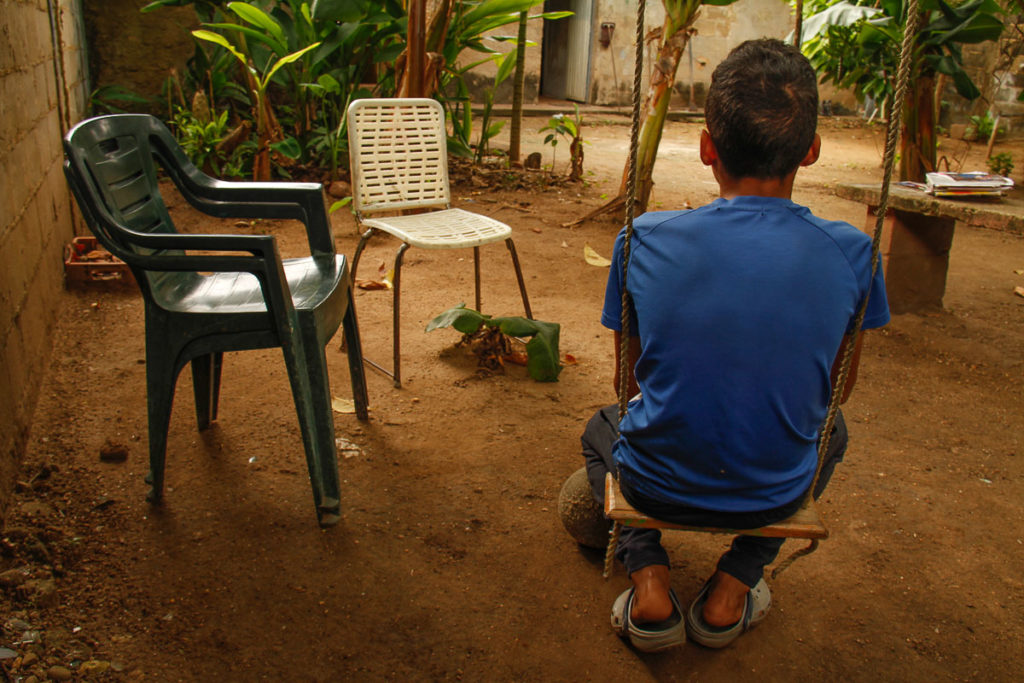 —What’s up, kid! Could you fix this pair? I can’t afford new ones, they are too expensive. Sow them so I can used them a little bit more time,» says one of Daniel’s new customers.

Seems that everything in the residential development is half finished. As if time had stopped at the stage in which everyone could buy and build.

The new neighborhood’s cobbler has as a policy of not receiving many orders. Although money is needed at home, he wants to have time to rest and share with his two teenage children and his now 2 year old daughter.

—The candle went out again, light it! I like that is on. It has to be always on, I’ve told you! —his wife demands.

After fulfilling the task and playing with his young daughter, Daniel goes back to work. Now is a savvy sewist, more skillful and agile. The result pleases its customers. 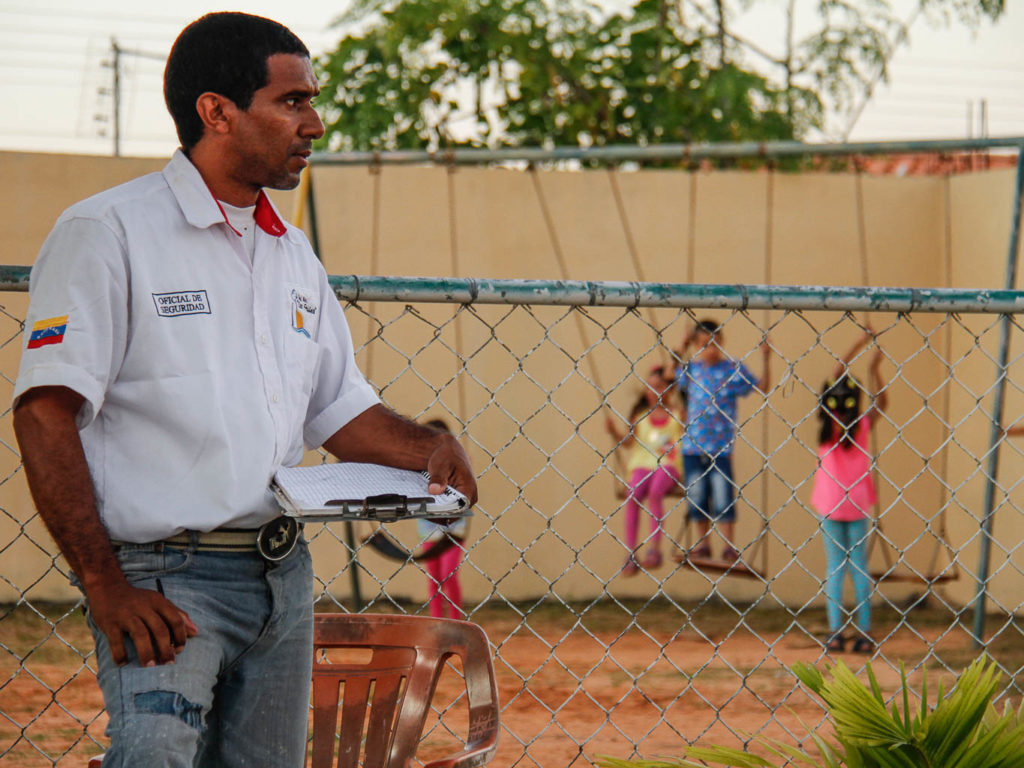 He keeps his first shoes’ repairs, those that he did under the tree, like trophies. No wonder, it took him many days to sew them and it was a very special customer: he did not refer to him as a cobbler, he called him dad. He found them among many old things stored.

—Why are these shoes torn? His wife asked him when he found them.

—These were Gabriel’s, he used them like this last Christmas. Since he knew he did not have enough money to buy new ones, he did not want to tell you so you didn’t worry. He decided to use them like that.

—OMG! How I could not notice it, I was so busy with so many things that I did not notice it. Forgive me, son! Daniel said to himself, and he devoted to repair them.

It was afternoon. Even though the sunlight shone through the window and illuminated the room, the candle was still lit. Daniel went through the house.

-Please, lit the candle, man. The breeze blew it off again, I do not like it like that, it must always be lighted,” was her answer.

He complied. He approached the table and lit the candle. In front of it was a picture, two faces lighting up. There they are, Gabriel David and Daniel Esteban.

«Look son,» Daniel said, looking at Gabriel in the picture. “Here are your shoes, I fixed them, look, I sewed them. What do you think? Don’t they look good? I keep them in your and your brother’s room. I do not allow anyone touching them. The other day your cousin, Taifran came and said he was going to put them on, I said no. I think he got upset.

Before going to bed, he goes to check on his other children. Two teenagers and a baby are asleep. He turns off the light, gives them blessings. Of the four beds, two are still on use and the others are empty and intact. 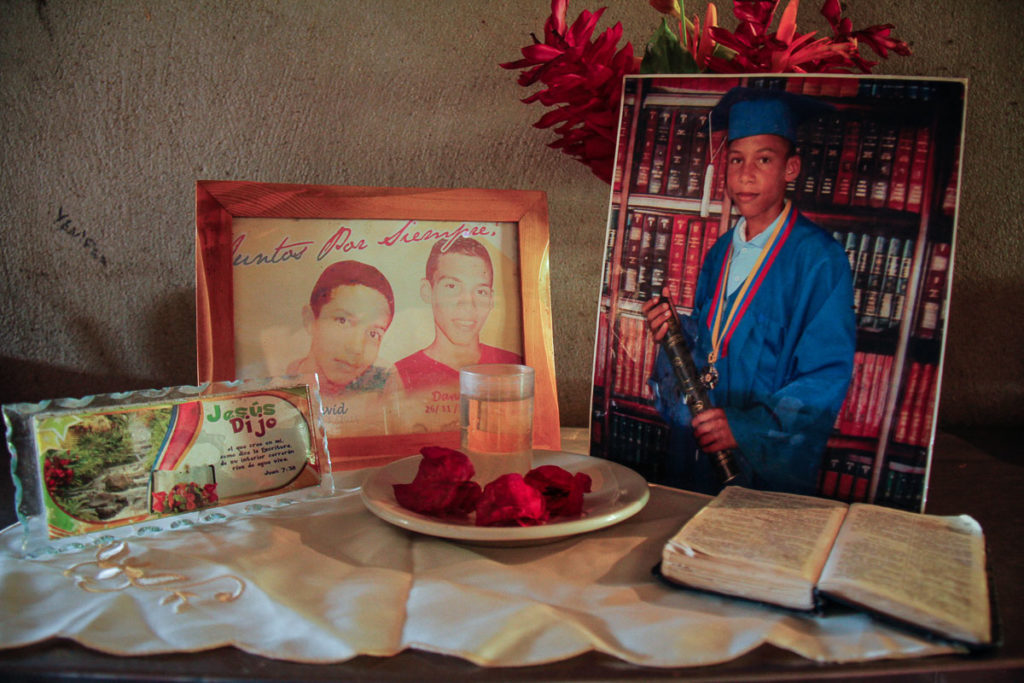 She Needed to Be as Strong as Her Mother Had Been
I Carry It In One Foot
She Looks at the River Where Her Daughter Sailed Away
When I Saw My Mom Cry, I Knew We Would Be Jailed