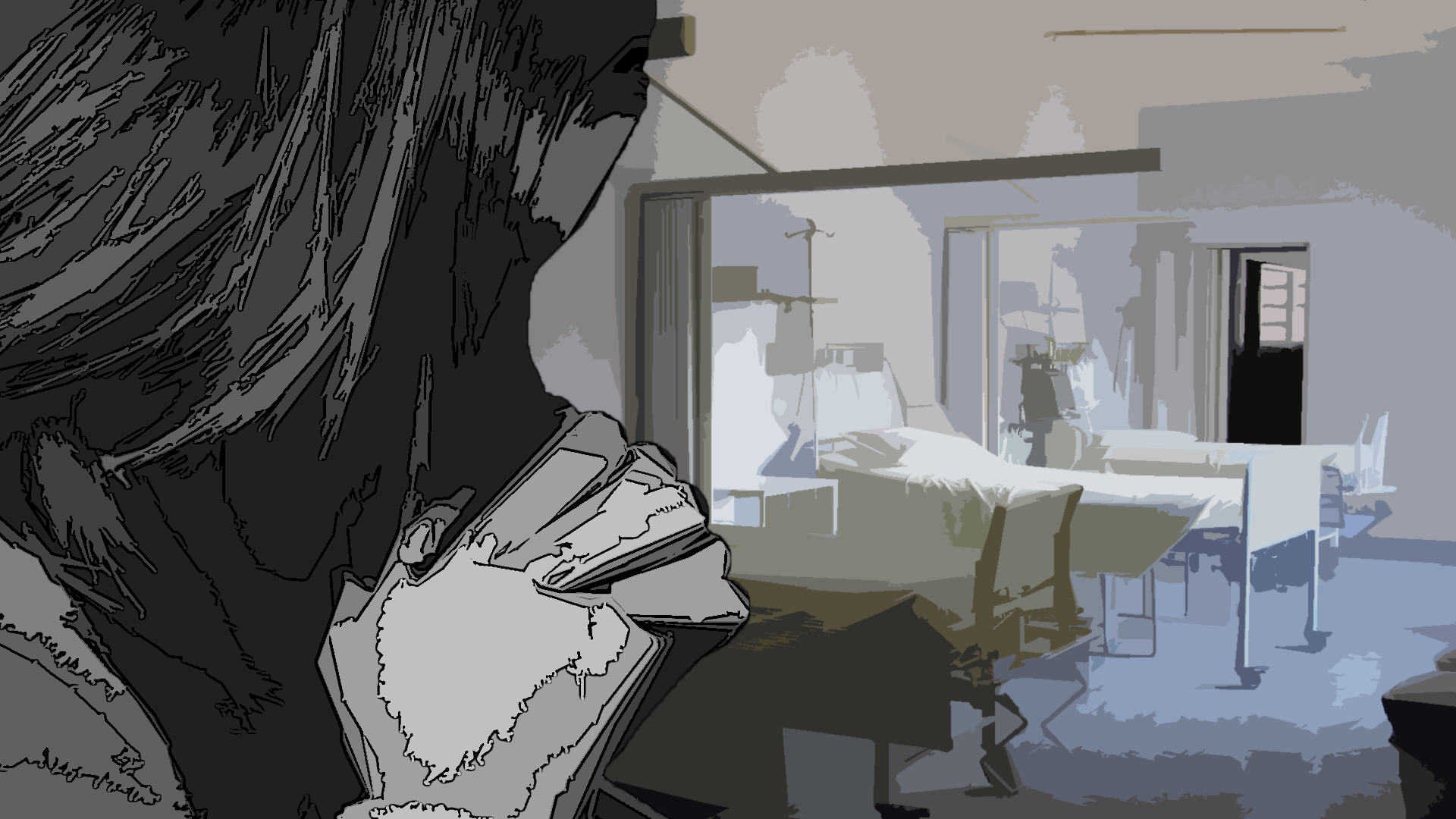 The Woman Who Faces the Overflowing River

A pediatrician working in a public hospital of Venezuela, treats her patients and at the same time dries her tears mindlessly, trying to endure the devastation she faces every day and powerless to do anything about it. One day she is unable to cope and collapses psychically. A colleague suggests her to request a leave. After 60 days at home, trying to pick up her family life, she finds the nourishment she needs to return to that daily tragedy and continue offering health assistance. 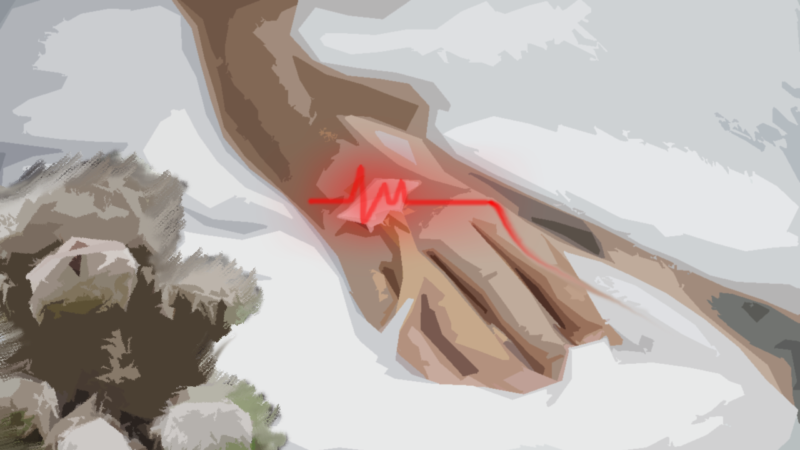 It had been a week since she returned to the hospital. And although she is back from her leave with renewed commitment and strength, as she listens to the medical resident telling her about a child he had admitted two days before, she could not help feeling a twinge in her chest. As she is heading to the Pediatric Emergency Room, her mind is trying to get a grip of her emotions. But nothing could have prepared her for what she sees there.

Three months before, her eyes were downpouring. She can’t recall when she began reacting in such way, it was something she did not think about or anticipated. It just happened. She did her on-call time religiously, as she had done for the last 12 years, with all her medical abilities and skills ready to take care of her patients. But despite her years of studies and specialization, she watched them die, one by one, being only able to offer comfort to those parents clinging, until the end, to the slightest hint of hope.

One of those parents had approached her to say: «Doctor, during the 15 days that my wife and I have been here, we have seen more than 40 children die, we are worried, we want to do something», and that «something» for those desperate souls was to kidnap her within the pediatric wing to call the attention of the authorities. Her response was: «Do whatever you need to do», and she walked away with her heart pounding hard her chest.

In the most critical moments, there were three children laying on one bed, and more were treated in the hospital’s corridors. Neither she nor her colleagues could cope. The crisis affecting other hospitals in the area had turned their emergency room into the only place where children could be treated. Added to this, the lack of antibiotics and supplies (a non existing resource at the Venezuelan public health system) further eroded the already fragile foundations that supported the hospital’s infrastructure and the pediatric emergency service, where not even gauze was available, neither artificial respirators.

Expressions of a desperation cry in the eyes and, sometimes, in the mouths of the children’s parents and relatives, reverberated in her soul. And hardly noticing it, her eyes began to overflow, as the Orinoco river (one of the longest rivers in South America with 76.3% of it in Venezuela) did in Guiana (area located in Venezuela’s Bolivar state, which floods during strong rainy seasons). She was aware of this. As an automaton she wiped her tears, and went on. But others did notice it. Including her family. When she returned home, she acted like a ghost, somber and gray, answering reluctantly and wanting to lock herself in her room without saying a word or listening to anyone. Her husband and children were collateral victims of the collapse of a health system that was destroying her.

She lived startled. No matter where she was, or what she was doing, those nurses’ words calling her: «Doctor run, another child is dying!», kept her in distress. She could not sleep, she hardly ate, she was cranky and sad, and she cried, wept constantly.

And when she was at the edge of that abyss, Sarah came.

She was a beautiful 9-month-old baby with pneumonia. During the 21 days she was secluded in the emergency room, her parents, humble people, relied on family and friends in order to buy everything that she needed to survive. But she did not make it.

«When Sara died, I collapsed,» she says, with her sight fixed in the emptiness.

A colleague advised her: she should request a leave. And so, she did.

She went away from those corridors filled with sadness for 60 days, and began to rebuild her strength. She did not have any support from the health institution she worked for; doctors have no health insurance except that which is woven with the solidarity of their peers. So, she appealed to that solidarity, and she used words to express the river that poured from her eyes. Also, for the fury and silence that was destroying her home. Slowly, the peaceful afternoons watching TV returned, also the dinners talking about: “what did you do today?”, the hugs and the kisses of: «Have a good day». Gradually she remembered what a brave woman she was, that she had faced her husband’s cancer and that she was her family breadwinner, a daughter, a sister, a mother, a friend. Little by little, she began again to be part of something, to boost, and when she had to return to her job, she did it with the integrity of a 55-year-old woman, aware of her role as a caregiver inside and outside home.

When, on Friday of that week she returned, she received a child, she did not want to admit him. She had told the hospital principal that she would not continue to treat patients in inhumane conditions. «I’m sick of just helping them to die well!», she said. And she pointed out to her medical residents: «Do not get used to what is bad, to scarcity, a hospital should not in these conditions».

But the child was very ill. He was referred from another hospital, where he was supposed to have been treated for his illness. But when he arrived at her medical care, the boy barely reacted. Her on-call time was about to end.

She decided to admit the child, and explained the parents that she was doing it due to their son’s conditions, but that they really did not have any beds. The hospital began giving him palliative care, and she went home.

On Saturday they told her that the boy had convulsed. He had cerebral malaria. Being indigenous, they managed to do a tomography through the Indigenous Support Service. The scan showed that he had suffered a hemorrhage, and his physical and cognitive functions were compromised.

While she was heading to the emergency room, medical residents explained her the findings and diagnosis given by the hospital’s child neurologist.

And when she arrived, she could not take step further.

The boy’s parents were standing by his bed. They were holding him, hugging him, rocking him with infinite tenderness, while they cried and sang with such a deep sorrow, that she felt again the Orinoco river overflowing her reconstructed retaining wall. The young woman stationed at the ER explained her that was their way of saying goodbye, because they did not know if their just 5-years old son was going to wake up again.

She, the woman, the mother, the daughter, closed her eyes tightly and felt the tears burning her face. She, the doctor, opened her eyes, dried up the tears and walked towards that scene, ready to fight against the scarcities and negligence of the public health system. And she succeeded, the little boy overcame the crisis and was able to return to his community.

The time she was away from the hospital helped her to overlook the situation. In the lack of effective responses from the hospital authorities, she sought help at external bodies. Thus, she has been able to offer financial support to some parents, finding medicines, relocations and even a respirator for a 3-year-old boy with a severe infection due to an accident, after searching for that vital support in other hospitals. During that process, one of the doctors with whom she spoke told her: «Doctor, we only have one ventilator, and a man who had lost part of his intestines is using it. If we take him off, he dies.»

Patients with pathologies exacerbated due to malnutrition keep coming in. She knows that if their condition worsens, probably the will die, due to the lack of respirators, or blood for transfusions. She is well aware of this, that’s why every day, when she gets home, she rebuilds her retaining wall. Dinner with her family, talking about any topic, clinging to the thread of the most daily and friendly life she is capable of.

The main character of this story requested not to disclose her identity nor the hospital or the area where it is located to prevent retaliation in her workplace.