They Promised They Would Help, But They Never Came Back

Obe is 22 years old and suffers from cognitive deficit, organic psychosis, psychomotor agitation, and malnutrition. Margarita and Robert, his parents, do not let go of his hand, even if at times he does not know who they are. They do everything in their power to make sure that he gets the medical treatment they cannot afford to buy.

Invariably, Robertson López wakes up early in the morning. With the help of Margarita and Robert, his parents, he goes to the dining room, sits down, has his favorite breakfast of arepa and eggs, and goes back to his bedroom. On some days, he watches television; on others, he stands in the middle of the room, his gaze lost, for who knows how long. He is 22 years old now and has spent his last eight battling seizures, visiting doctors, and struggling with diapers. 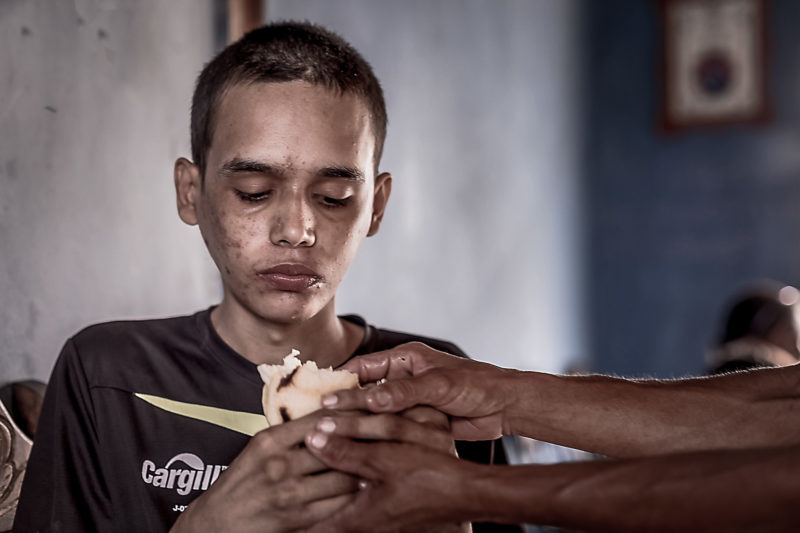 Obe, as he is affectionately called, lives in Carorita Abajo, north of Barquisimeto, state of Lara, with his parents, his siblings —who are 21 and 12—, and his 4-year-old nephew. He finished 6th grade in July 2010, but the teacher told Obe’s parents that he could not move on to the next grade because he had not yet learned to read. They consulted with several doctors, who told them that their son had a learning disorder in reading. Two years later, at the age of 14 and following numerous tests, Obe was given a more accurate diagnosis: cognitive deficit, organic psychosis, psychomotor agitation, and malnutrition.

And he stopped studying, as predicted.

He would gradually lose cognitive and physical skills. He does not speak fluently anymore and just utters the phrases he needs to ask for food and call his parents. He has reduced mobility and must walk with the help of other people. His parents are always by his side, even when his mind is so blurred that he does not know who they are. 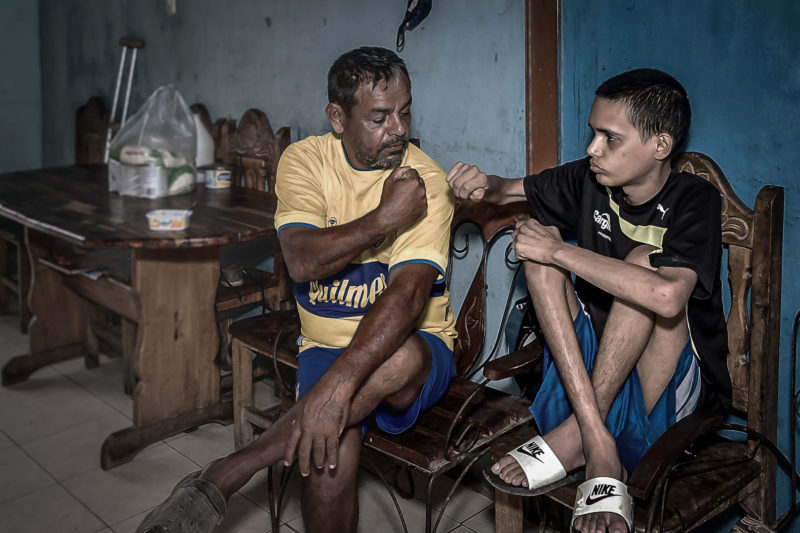 Obe was 14 when he was injected by mistake with an expired medication, which led to seizures. After repeated episodes, he was admitted to a hospital. A couple of days later, he was prescribed treatment and discharged. At the time, Robert had no trouble buying the medication with his pay as a company driver. But in 2019, he lost his job.

He would go to great lengths to find a new one, just as he would to find the drugs that his son needed: carbamazepine, valproic acid, risperidone, and clonazepam. Robert didn’t have much money to purchase the entire treatment, but at least he tried hard to make sure that Obe got his carbamazepine, which is an anticonvulsant that was in short supply in pharmacies. Both he and Margarita thought that the carbamazepine was sufficient to keep their son’s condition under control. 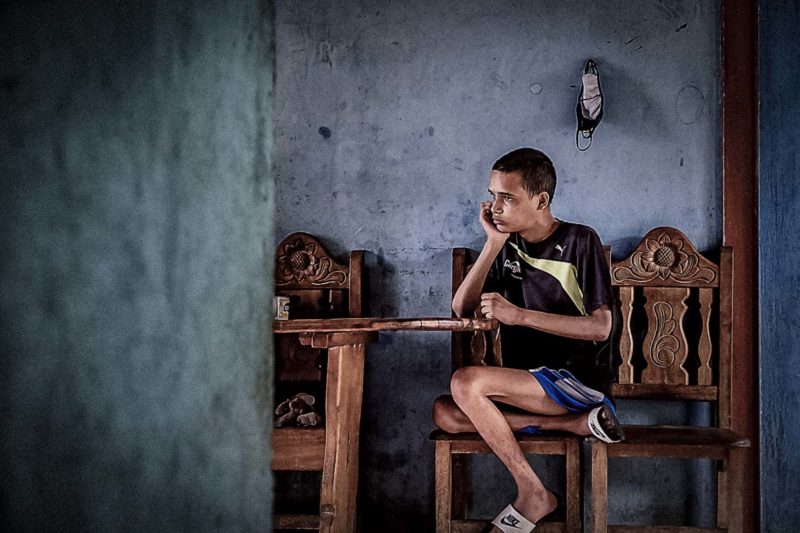 Robert found another job in Barquisimeto and expected things would get better. But then came 2020, the COVID-19 pandemic, and the lockdown measures, and he was jobless again. So, he decided to sell oregano door to door. When he gets a ride to Caracas, he sells as much oregano as he can fit in a sack. He worries that Obe will run out of treatment, which he has not been entirely able to prevent because they can barely buy food with the little money he makes. 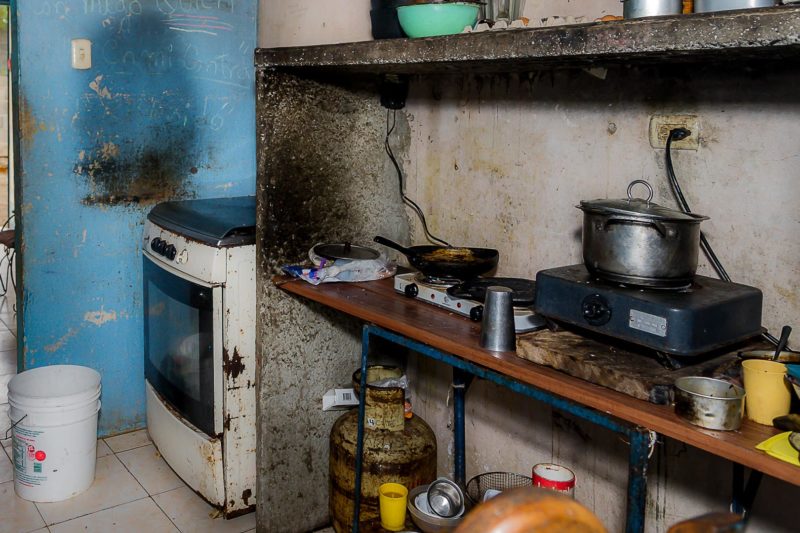 Between March and April 2020, Robert tried to have Obe admitted to El Pampero Psychiatric Hospital in Barquisimeto. He and Margarita feared that the boy would relapse, since he was not receiving regular treatment. They went to the hospital looking for information, hoping to find a bed so Obe could get all his medicines, but a man who was cleaning the street outside the hospital advised him against it, warning him that the situation inside was much worse than anything he could be going through.

He was devastated. Come May and what they had tried so hard to prevent happened: Obe had a seizure. And then several more. He was emaciated and was a mere 55 lb. They decided to take him to the doctor. They had to ask for a ride to get to the nearest rural ambulatory care facility, where a doctor referred Obe to a nutritionist. The latter diagnosed him with chronic malnutrition and devised a meal plan for him. Which left Robert and Margarita wondering how they would manage to buy the food and, at the same time, pay for the encephalogram that another doctor there had ordered.

They came back home with more doubts than certainties. 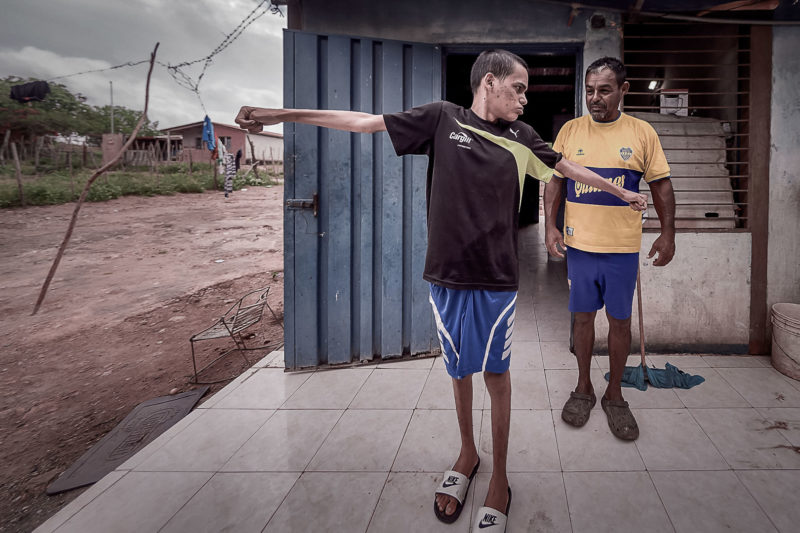 One day, a neighbor posted a photo of Obe, painfully skinny and bedridden, on social media, with some information about his situation. The post was shared by numerous persons, and people from inside the country and abroad, as well as non-governmental organizations, contacted the family to donate Obe food and nutritional supplements. Thanks to their contribution, Obe gained 22 lbs. in just a couple of months.

In December 2020, following the publication of the boy’s story in a regional newspaper, workers from the office of the mayor of the Iribarren municipality paid them a visit. They brought a mattress and food, and promised they would provide them with medical assistance and help them with Obe’s transportation to and from hospitals, but they never came back.

Some people gave Margarita and Robert money and they were able to scrape together $30 for the encephalogram. However, they are yet to have the report checked by a neurologist or a psychiatrist because they cannot afford a private medical appointment. 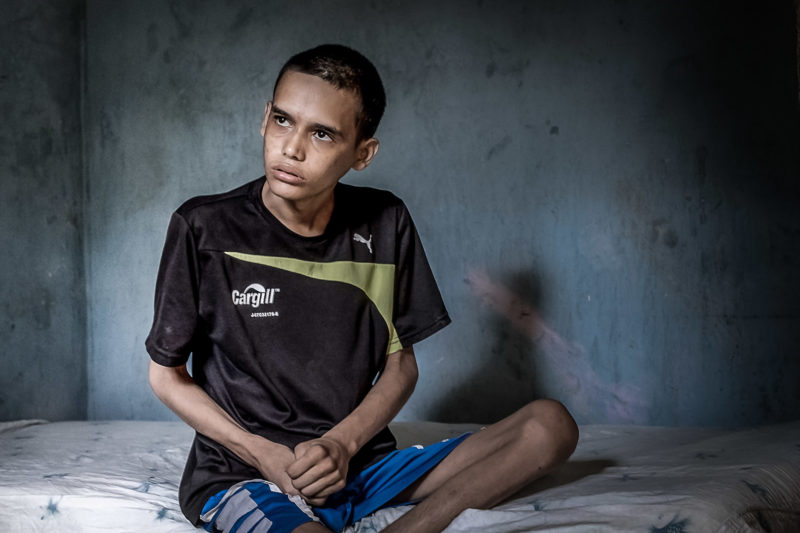 Although Obe is a quiet young man, his parents always keep an eye on him, for he has ran away before to the neighbors’, asking for food. Margarita and Robert dread to think that he might have a seizure in the middle of the street, or that he might get lost and not know how to get back home.

On one occasion, Margarita had a pumpkin cooking on the stove. Obe put both his hands inside the pot of boiling water, took a piece of it, and placed it in his mouth. Maybe he was starving.  Since it was scalding hot, he swallowed it in a haste and burned his throat. They had to rush him to the nearest hospital, where he was treated for two days for the burns he has sustained to the pharynx. 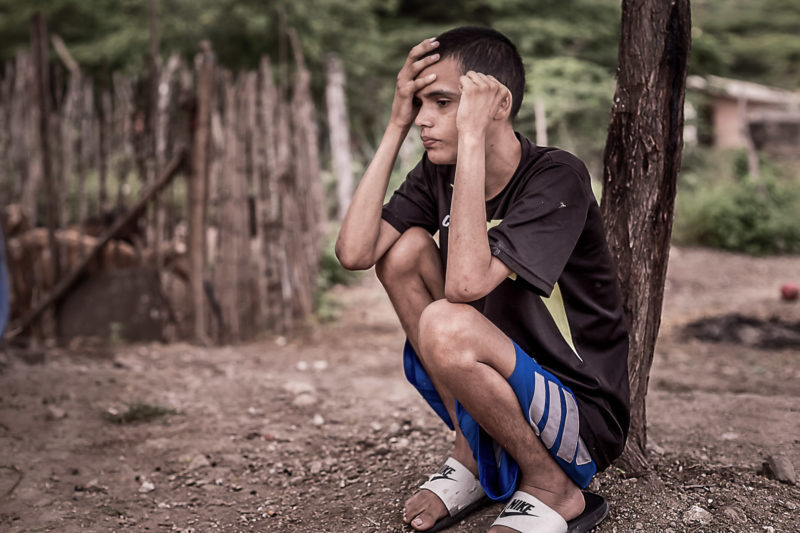 After that, Margarita does not leave his side when Robert goes out to buy food or for work.

Obe didn’t leave his room for two months because he was so weak from malnutrition that he could not even get up. But now he walks and wanders around the house. Every so often, he steps out to the yard with his parents to catch some sun.