Through It All, Yovanna Is Her Hope

Fay Ellen Hernandez lost one of her children to malnutrition, and she fears that one of her grandchildren, who is underweight, will share the same fate. Since the bag of food she receives every two months through the Local Supply and Production Committee is just five days’ worth of meals, the rest of the time she goes to great lengths to make sure that no one at home goes to bed without eating. 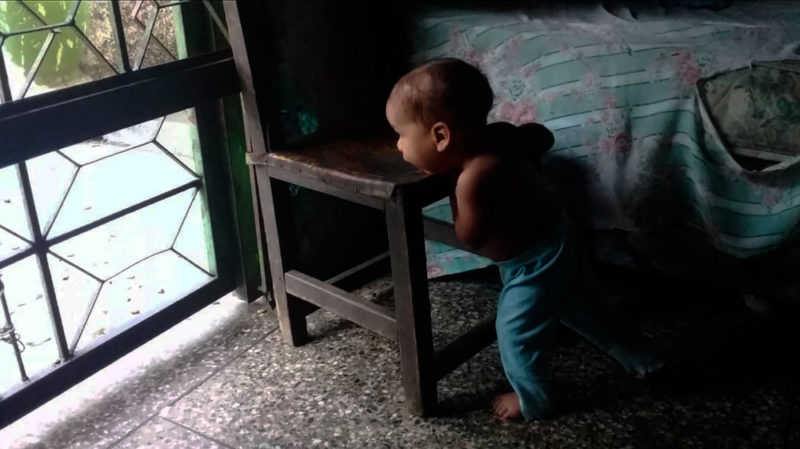 As soon as Fay Ellen Hernandez walks through her house’s door, her three grandchildren clap their hands and shout:

They are excited because she carries a kilo of cornmeal with her. She smiles at the children, and, as if the package were a trophy, raises it at face level, making a victory gesture.

“I earned it by running an errand,» she notes.

It’s almost 1:00 in the afternoon and not a single soul at home has had anything to eat since the day before.  So, Fay Ellen goes straight to the kitchen and rushes to fix the dough to make arepas.

The woman is 5 feet tall, weighs 92.5 pounds, and is aged 53, but she looks older. You can see her bones through her skin. Her clothes are loose, as if they were two or three sizes too big. She has to fasten her pants with a belt so that they do not fall off. 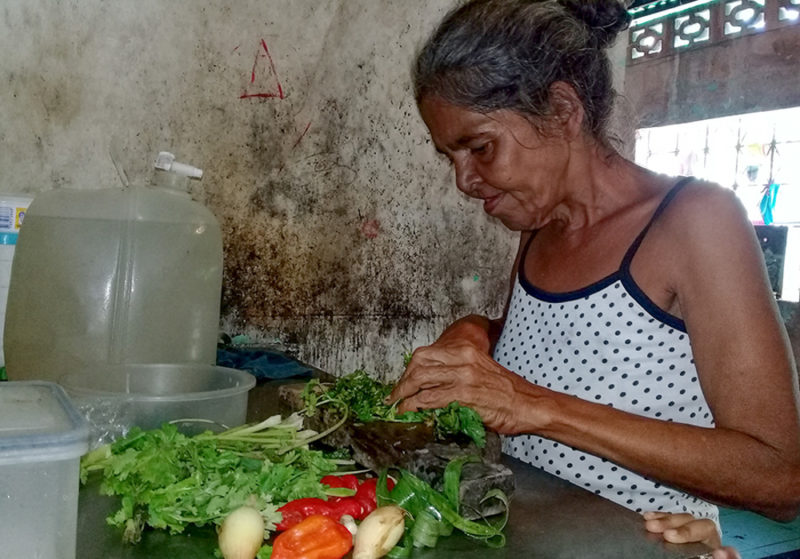 It is a Saturday in late October of 2020. Fay looks exhausted. She is sweating. Her eyes, wrapped in deep dark circles, look dull. She has just walked several miles under the scorching midday sun to get home. It is a two-story building in Ocumare del Tuy that she and her husband bought 25 years ago. It has deteriorated over time: the effects of water leaks and moisture have built up on the walls and on the ceiling. That is where she lives with her husband, her three grandchildren, aged 1, 4, and 5, and Yovanna, her youngest daughter, 20.

To appease hunger, which has taken hold of the family for years now, she does whatever she can: clean other people’s houses, run errands, ask for food from people. But it didn’t use to be that way. Although she has always led an austere life, there was a time when her needs were not that many. She says she remembers better times.

When she was born in April 1967, her parents were happy because they had just had a little girl. Soon, the brown-skinned baby with curly hair and black eyes became the darling of the house. Her parents lived with her and their other five children in the grandparents’ house in San Fernando de Apure, right in the Venezuelan plains. Fay grew up surrounded by love and affection. There were always presents, clothing, and food for her on birthdays and Christmas.

When she was 5 years old, the family was assigned a house of their own in Ocumare del Tuy, state of Miranda, as part of a government housing program. Since then, she has lived in that city, which, despite the heat and the insecurity, she has learned to love. It is there that she went to school and high school. When she finished the 9th grade, she decided to drop out, in what she would later describe as an outburst of teenage rebellion

“That urge to be an adult too soon is going to get you into trouble,” her mother used to warn her.

But Fay Ellen ignored the advice.

For two years, the only thing she did was help her mother with the housework: she learned to cook, to do the laundry, and to iron. And nothing could prevent her from doing so, for there was always running water and electricity at home.

When she turned 18, she started working as a sales clerk in stores. The salary she earned allowed her to pay for her expenses, and it wasn’t long before she was self-sufficient. At the age of 20, she became a mother for the first time and would eventually be the mother of five children: four boys and one girl. Since the father of her last three kids had a job that allowed them to live somewhat comfortably, she quit her job. She thought she’d rather devote herself to her kids, especially to Ivanovish, the eldest, who had a cognitive development impairment.

It was around that time that they managed to buy the two-story house where they still live and where they lived happily for years, a time that now seems like fiction to her. 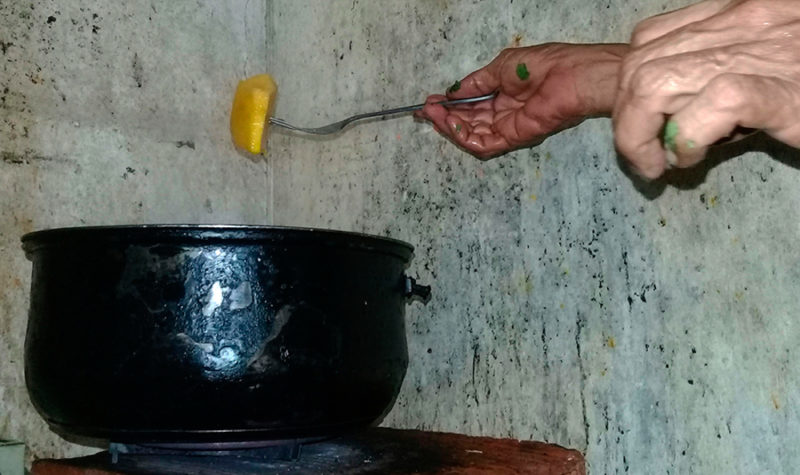 In 2010, the money her husband was bringing home was no longer enough to make ends meet. With food running scarce, Fay Ellen went back to work to help pay the bills. In a stand that she set up in downtown Ocumare del Tuy, she began selling phone calls.  It worked. She contributed the money she made towards the grocery list. But in 2013, the amount of food in her fridge began to dwindle again and they had to reduce their daily meals from three to two. That was at best, of course, because sometimes they could only afford to have one.

That’s how hunger came into their home, wreaking no small havoc.

One of Fay Ellen’s concerns was Ivanovish, her eldest son. The boy was hungry all the time and snatched food from people on the street. If someone had a loaf of bread in his or her hand, he would take it from them. He was restless at home. He fought with his siblings over food. He would lapse into a crisis, and Fay had a hard time calming him down.

In those days, she worked trimming weed at one side of the road that is the entrance to Ocumare del Tuy, while one of her children tended to the telephone-call sales stand. Her salary from the mayor’s office was a bag of food, which she valued because it was getting increasingly difficult to get something to eat. The shelves in the markets were empty. And the little that was available, she could not afford.

“Hurry up! There has been an emergency at your house!”

Fay Ellen picked up the pace.  From a distance, she could see other neighbors crowding at the entryway. An emergency did not await her, as the neighbor had warned her, but a tragedy: the inert body of Ivanovish lied on the bed. He was dead.

She embraced him as she had done 32 years before, when she brought him into the world.

The coroner’s autopsy said that the cause of death was malnutrition.

A year later, still grieving over the absence of Ivanovish, Fay was again touched by misfortune and sustained yet another blow. Officers from the Scientific, Criminal, and Forensic Investigations Corps (CICPC) had killed Yorseth, the third of her children. According to the police, the young man had been involved in a robbery.

From that moment on, Fay Ellen would also take care of Yorseth’s two children.

Some time after that, she became a grandmother for the third time with the baby of one of her sons, who is serving in the military in a barrack. 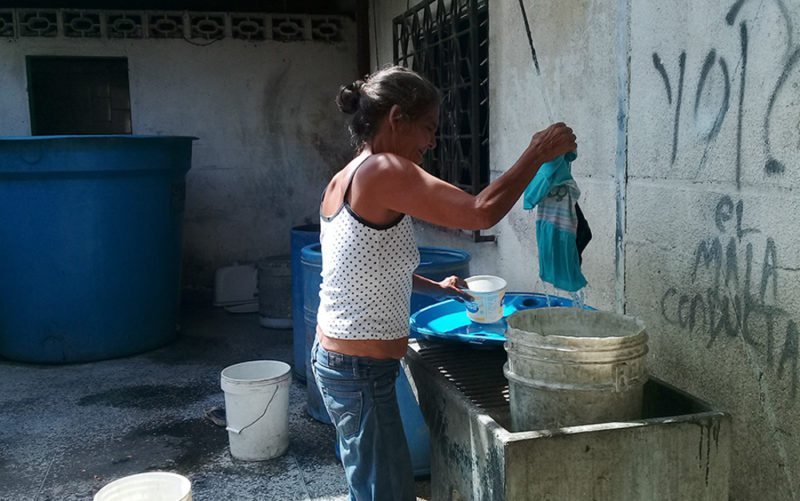 It was then when she realized that she had to reinvent herself if she wanted to earn more money, because the phone-call rental business wasn’t paying off anymore, and she would no longer trim weed in exchange for a bag with food. She didn’t want the kids to go hungry, so she started shopping for the neighbors, or ‘running errands’, as she would put it, in exchange for something to eat. She also started cleaning houses. A day’s work earns her 500,000 bolívares, which is less than a dollar. There are days when she has no money and has to go ask other people for food.  They would give her rice, or pasta, or flour, and she would fix a meal with that. And if there is not enough food for all, Fay Ellen will skip the meal altogether so that her grandchildren can have at least one mouthful before going to bed.

Every two months, she receives a bag of government-subsidized food through the Local Supply and Production Committee containing rice, pasta, and corn flour, but it is barely enough to feed her family for five days.

She has been up to four days without food in her stomach.

“Only those who have felt their stomachs growl, with no hope of satiating hunger, know what I’m talking about,» she says as she continues to shape the arepas for her grandchildren.

Her voice is muffled, about to crack.

She says that her favorite meal is pork chops with broccoli salad and plantains. Which is a luxury to prepare at present, with so many things to deal with. 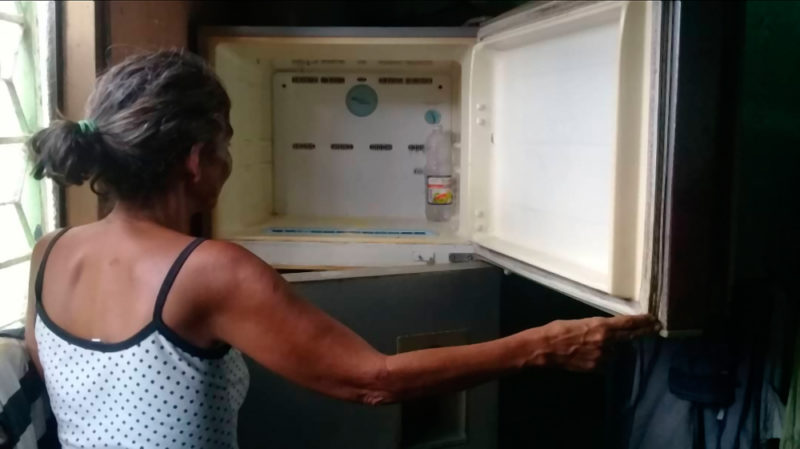 A year ago, during one of many blackouts, her fridge broke down, which is why they don’t have cold water to drink now. The stove is also out of order. In July, someone lent her a half-running one, but it wasn’t until a few days ago that she was able to use it because they didn’t have cooking gas. For three months, she had to cook on a wood stove. Her husband, who is 70 years old, got asthma from smoke inhalation, and her grandchildren’s throats and eyes got sore.

What she fears most is that her 1-year-old grandson could share the same fate as her son Ivanovish. And rightly so. The kid weighs 13 pounds, three below the average weight for his age. Medical reports say he is malnourished. For lack of money, Fay Ellen has been unable to take him to a nutrition center in Santa Teresa, a town located about 12 miles from Ocumare del Tuy. Also for lack of money, she has not gone to the doctor to have herself checked, even if she should have: she has fainted twice in the last three months and has lost vision in her left eye due to cataracts.

She is burdened by all these problems. There are times when she feels as though she is bound to remain stuck in life.  She finds it difficult to sleep at night. 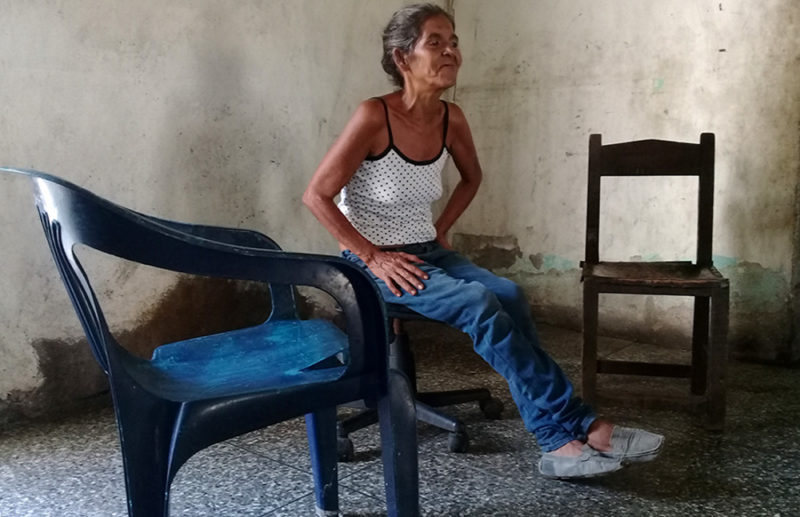 “I don’t even have a TV to entertain myself and clear my head. It broke down two years ago. And, how can I buy one if everything has to be paid for in dollars? I miss watching my soap operas, but they are now but a memory of the times when things in Venezuela were different.”

Through it all, there is someone who gives her hope: Yovanna, her youngest daughter. When Fay talks about her, her expression changes. Yovanna is her pride. The girl is studying the 5th semester of nursing at the Venezuelan Red Cross. Fay feels that her kid will turn out to be a successful professional and that things will be very different for her. That is what she prays for to God, a lot.

The arepas are ready. Fay Ellen serves them on color plastic plates and smears some margarine on them. Then she calls the children one by one, who joyfully come over and then go back to the living room and sit on chairs next to where they had been playing, for there is no dining table in the house.

Fay Ellen watches them walk away, and you can see a slight smile on her face, if not of joy, certainly one of satisfaction.

“At least for today, they will not go to bed on an empty stomach,» she says, as if life were giving her a break. Yet another one. 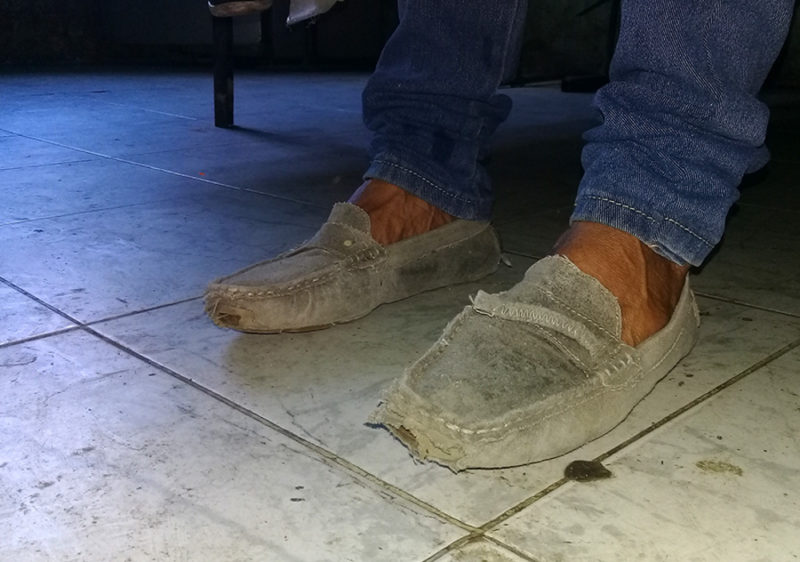 Exactly the Time She Had Been with Yair
They Are The Ones Eliana Smiles at Now
They Know the Restaurant Will Be There.
Things Will Never Be the Same Again