To Hear the Vroom of the Trucks

From an early age, Alcides learned the business of crop farming and sale from his father. Every morning, they would hop on a truck and drive to markets in Caripe, the town in the state of Monagas where they lived, and other towns nearby. They felt that the trade would always bring them prosperity. 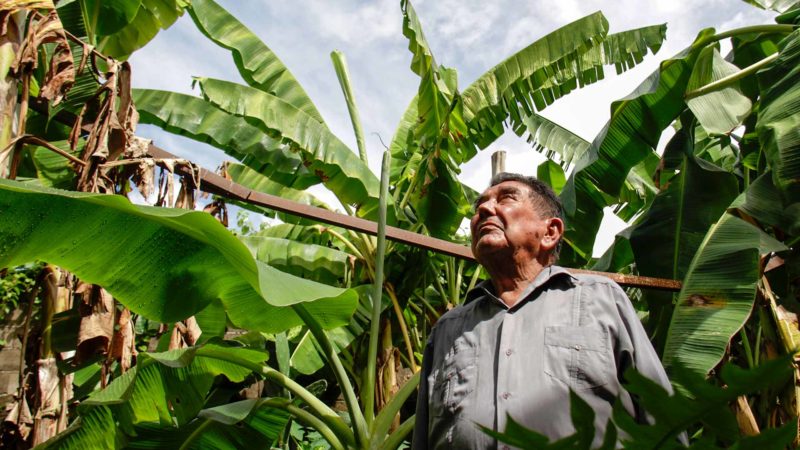 Alcides looks at the small vegetable garden he planted in his house’s backyard. There are plantain plants, coffee plants, orange plants, white celery plants, parsley plants, and many more. He is 80 years old and proudly notes that he will turn 81 in January of 2021. One can see he is a vigorous man. He walks around with ease and barely limps on his right leg, which was injured when he was rammed by a bull years ago. He always wears pleated pants and a nicely ironed guayabera shirt. He usually carries a small hand comb in his pocket, which he takes out every time he wants to put his hair to one side.

“As gentlemen do,” he says.

From that small vegetable garden, he will take the wet rub to season the meat for the hallacas he will make in December with his wife and six of his seven children. Only their daughter and two of his grandchildren who left the country will not be there. He won’t stop missing them.

Alcides holds on to the field. He was born in Caripe, a town in northern Monagas, in eastern Venezuela, which looks like a huge natural garden. The cold climate of his land contrasts with the heat of Maturín, the state capital, where he now lives. 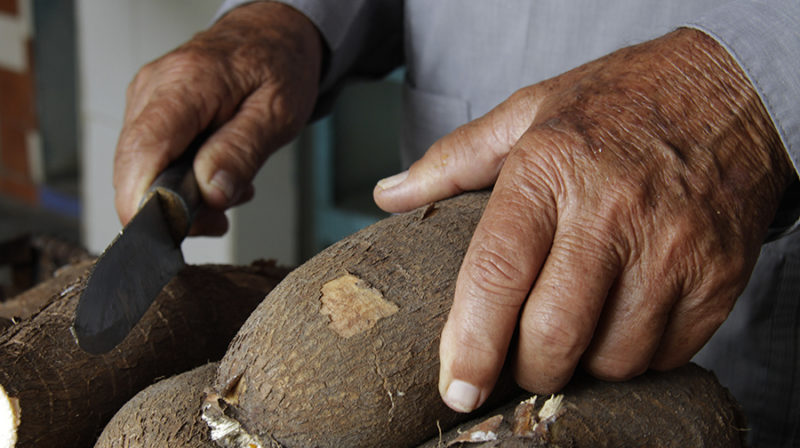 His father taught him to till the land and sell the crops. Alcides was the inseparable companion of El Indio, as they affectionately called his father in the village. When Alcides was 10 years old, he always rode as “co-pilot” of the truck where they moved the crops they offered in the markets, both in Caripe and in other towns and cities.

It was the 1950s. Venezuela’s boom was just beginning. At a time when the world was healing the wounds of World War II, the country benefited from the oil income and had the highest per capita Gross Domestic Product in the world. Alcides’ family, however, gave little importance to the oil rush. They stayed in the field. Back in the days, farming paid off. And abundantly so. The trade of coffee, fruits, vegetables and produce was a thriving business. At least for them.

Father and son would go out, very early in the morning, and ride the more than 32 miles that separate Caripe and Maturín.

“Where are we heading today?”  Alcides would ask before leaving.

“We have to take the truckload to Maturín.  Did you bring a blanket? It is cold out there. I don’t want you to shrink even more on the road. Go and get the blanket. It will keep you warm,» joked El Indio.

On their way there, Alcides listened to the stories his father told him, many about work in the fields. Although they were not a wealthy family, they had everything they needed to live comfortably.

But things changed one morning in September of 1955.

Alcides didn’t want to get up. He felt tired and wasn’t keen on letting go of the sheets. Although he had to leave with his father for Maturín to deliver a coffee harvest, he decided to give himself a few extra minutes of sleep. Then a shriek of terror pulled him out of bed: it was the terrified voice of his mother.

He thought that maybe something was wrong with her, so he ran to where she was to help her. But, as he looked out into the corridor, he saw her silhouette over his father’s body: he was lying on the floor with a belt tight around his neck.

His mother was crying, asking for help.

She wanted to snatch him from the jaws of death, but it was too late.

Alcides, who at the time was a 15-year-old teenager, stared at the face of the man lying on the floor. He cast his mind back to all the trips, the long conversations, all the moments they had shared. He was angry. And now his father had just left for another trip, all by himself, without warning.

After El Indio’s death, the family had to surrender the truck to pay off an outstanding debt. To survive, they began to sell empanadas, which his mother prepared, or cassava or coffee. Alcides worked whatever job he could to help her support his six younger siblings. He became a skilled farmer. He tilled the land until after he turned 22, when he decided to stop.

Lured by the oil boom, he decided to go to Caripito, a town located two and a half hours from Caripe, to work for the Creole Petroleum Corporation, a US company that had established an oil exploration operation in Monagas. From what he had heard, they could offer him a good salary. They hired him, and he did well. However, after a couple of years, he decided to quit the company because he felt that he would never make it past a worker job.

He did not return to Caripe. He stayed in Caripito, where he married a young local woman in 1966 and had seven children. For a decade, he worked for companies in the area that distributed coffee. With the money he saved, he built his own store, where he sold fruits, vegetables, and non-perishable food. It was a thriving business. At the age of 30, he had fulfilled a dream: to buy his own truck and take up the routes that had been put on hold after his father’s death.

He worked at the store and distributed vegetables and produce in his truck, both in Caripito and Maturín markets. The proceeds from the sales allowed him to live comfortably. But Alcides wanted to go to the city. He didn’t see himself living permanently in Caripito. So, later on, in the 1980s, he sold the store and moved to Maturín, the capital city of the state of Monagas, with his family in tow. He set up three stores there, also selling vegetables, grains, fruits, and non-perishable food. 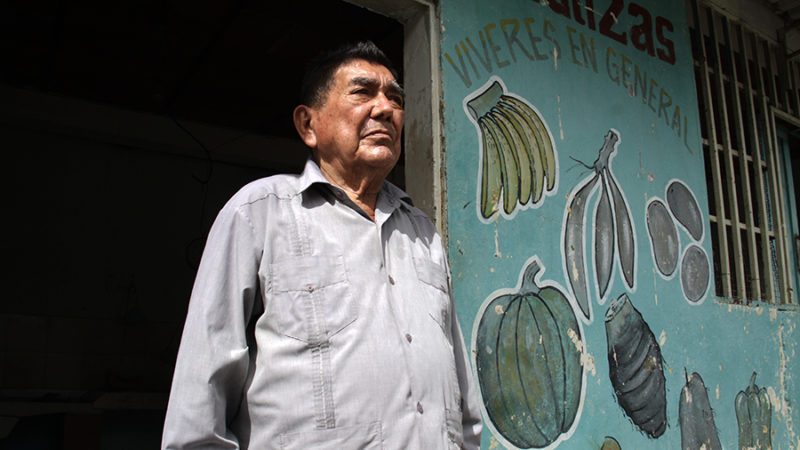 When his sons Jose Ángel and Rafael reached adulthood, they grew enthusiastic about expanding the business. They wanted to support their father in his food distribution activities, just as he had done with their grandfather, whom they never met.

They added two new trucks, which replaced the old one. They came up with the idea of bringing chickens to the markets. They would go to Maracay, in the central region of the country, to buy chickens, which they would sell in Monagas wholesale and retail. They were convinced that it would be profitable.

In 1994, travel was frequent and business was booming. They kept riding the nearly 373-mile distance between Maturín and Maracay, an approximately seven-hour road trip. But those trips were not without hurdles. Searches, requests for documents, and the withholding of the merchandise were customary at checkpoints. There was always some hitch that they managed to overcome by letting the national guards keep part of the cargo.

One day in 2010, something happened that eclipsed the abuses to which they had been subjected for over a decade.

“Where does the merchandise go?” asked a military man.

“Do you have a permit to move it?”

“Why, what’s missing? Everything is in order.”

“Don’t let this truck pass beyond this point.”

After a few hours, they returned the vehicle, but the guards had taken all the chickens they had in the back to sell to people in town. They had lost their investment entirely.

To avoid more incidents like that, they realized they would be better off if they worked out a deal with the military. On the upcoming trips, they gradually handed over part of their truckload of chickens to the officers so that they would allow them to continue their journey. It was either that, or to be resigned to losing all the merchandise. That didn’t make them feel less outraged, particularly because they had been hopeful about Hugo Chávez Frías, who ruled the country in those days, and his speeches that he was going to vindicate the work of farmers. But there were only obstacles in Alcides’ and his family’s way when it came to their work, which would multiply in the coming years, but to which they always found a way around.

The country was changing at a dizzying speed. It was moving head-on to a crisis that would disrupt people’s daily lives. There was no food in the markets, cash was scarce and public services were failing. People began to leave the country. In 2017, even though Alcides had put all his effort into their selling activities, rampant hyperinflation diluted their earnings. That’s why it was difficult for them to restock the store. So, they decided to buy and sell chickens only.

The roads turned increasingly dangerous because drivers were being attacked by criminal gangs. Travel at night was risky. Even so, the family did not stop the trucks and carried on with their trips. And they kept overcoming challenges too. Venezuela, having enjoyed decades of abundant and free gasoline, faced a shortage of fuel. That posed a good distribution challenge: they had to make shorter trips and they could no longer plan the routes they would take.

The journeys that began in the 1950s have now come to a halt. Trucks are stuck in long lines at the gas stations. There are also national guards there, controlling who comes in and gets a few gallons of fuel. Alcides’ children take turns in what end up being grueling days. They always leave at night and can be in line for 12 to 24 hours. They say that having a special permit from the Mayor’s Office in Maturín, which is granted to priority sectors, including food transport, has not helped them. The decision to let them enter the gas station always depends on the officers’ mood. If they are lucky, they get about 5 gallons or so of gasoline, which is not enough to travel between cities. As a result, they keep selling their products only to a few businesses in Maturín.

Alcides stays home, waiting for them to return.

“We don’t want to stop the trucks for good. If we do, what are we going to make a living from?” asks Alcides.

He admits that he doesn’t have the energy he used to, because time takes its toll on you. He hopes that the business that is now in the hands of his children will be profitable again. Meanwhile, he tends his small garden. There he is, serene, contemplating that piece of fertile land. For him, it is the memory of those booming years when he cultivated the land and traveled long distances with his father. He hopes to turn 100. He does not want to embark on his last journey without first hearing the vroom of the trucks, that sound that reminds him of those happy days. He closes his eyes and places himself sitting there, next to his father, ready to offer the best crops.

She Does Not Want History to Repeat Itself
He Told Me Everything Would Be All Right
Measles Is Back. May God Protect Us
In a Minute Her Uncle Would Step On the Ground