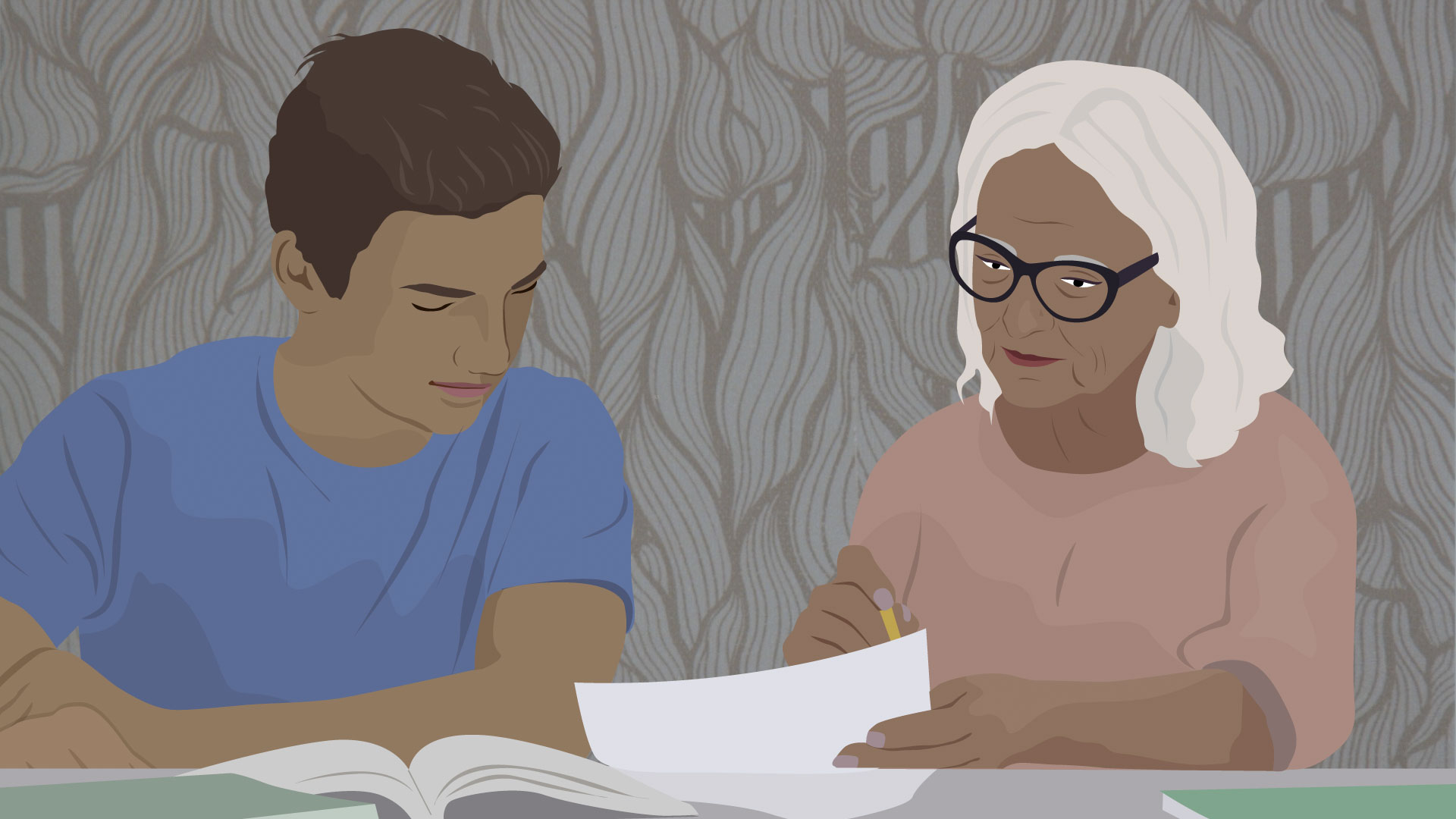 Ultimately, I stopped Asking Myself All Those Questions

For years, Nora dedicated herself to giving private lessons in physics, chemistry, mathematics and English to the young people of her community in Carúpano, state of Sucre, including Zoila Hernández’s kids. When the latter graduated from high-school, they lost track of Nora. That was until, some time later, Zoila returned to Nora’s house to lend her a hand. 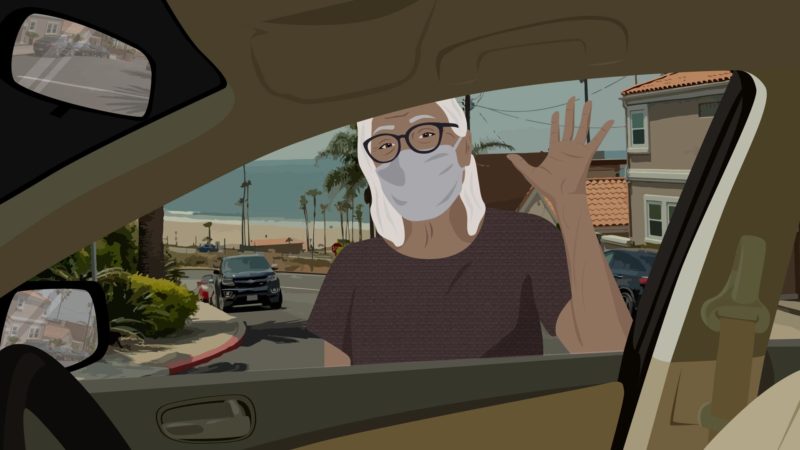 When my son was a ninth-grader, he needed tutoring in physics. My father, a mathematics professor who earned his degree from the Central University of Venezuela, would explain to him things he didn’t understand, but the four hours they spent going through the material ended up leaving both of them in agony. Truth be told, my children were never bad at school, but since I worked all week long, I found in the courses and extracurricular activities a way to miraculously compensate for the time I could not be with them. Some of the school moms, aware of my son’s need for support in physics, recommended me to contact a teacher, who they said could help him and be patient with him. Her name was Nora.

So, one day, I dropped by her house. I inquired about her registration and monthly fees. She looked at me with a serious face and replied in her deep voice: «There are no registration fees here. Leave the child with me. I will let you know with him how much for the lessons, which you can pay me whenever you can.” That same day, Nora suggested she could give me a discount if, in addition to physics, she also helped him with mathematics and English. Her offer made me suspicious, and I declined at first. But I eventually gathered that she was helping him with math and English nonetheless, so I agreed to pay her the amount she had initially proposed.

Nora had no official degree in teaching, but she had been an outstanding student and the kids just loved the way she explained things. She was tall, heavy-set, and wore straight-cut, button-down dresses well below her knees. She looked like she was over 80 years old, but she was not yet 70. Nora had difficulty walking, and her body swayed from one side to the other. She often complained that her legs ached. Maybe her height and excess weight were taking a heavy toll on her knees and feet.

We lived close by, so I occasionally saw her on her way back, having dropped her granddaughter at school. I offered her a ride. She would hop in, looking tired. If she spotted a neighbor walking by, she would ask me to give him or her a ride too.

I learned that her granddaughter was the child of her only daughter, who had died of cancer in 2016, during a school break. I remember that, when my children resumed their lessons with Nora after the break, they came back home upset because “Norita” had just lost her daughter. I couldn’t help but notice the way they talked about it: it was as if it was the loss of someone dear to them. And I must say that mine were like many teenagers: they lived in their own world and they did not mind about other people’s ‘drama.’

But this time it was different.

Nora continued working, but she could not conceal her sadness. Her house’s living room had become the place where the youngsters had the opportunity to get that what, for whatever reason, they did not get at school. Some of them weren’t even taught those things at school. Others said that the teachers ‘have it out for them’ and that they had to go to great lengths to prove them they were smart. That was the case of my youngest son, who also received Nora’s lessons. He was her favorite, and he was the first one I heard call Nora “Norita.”  Once in a while, he would borrow her phone to call me to tell me to pick him up if he finished early. And if I could not send him to Nora’s because I had not been able to pay her, he would tell me: “Don’t worry, Nora doesn’t charge for her lessons.”

In 2019, when my last son graduated from high school, I lost track of Nora. I only saw her when I passed by her house in the Santa Teresa parish, in Carúpano, very close to the coast of Sucre.

I had just started coordinating a group of lay people who engaged in charity work. While carrying out a survey of people in need, those who lived close to Nora said she was ‘living in conditions of vulnerability.’  I was appalled, though not surprised, because when face-to-face courses were suspended because of the pandemic, evaluation standards were relaxed and many students stopped going to her for extra lessons.

We included her in the survey right away.

I learned that Nora lived with a sister who was her senior by two years and whose only son had migrated to Peru; she was sick and needed of urgent surgery. There they were, two ailing older women living with a 9-year-old girl.

It must have been a very difficult situation to cope with.

The next time I came back, I brought her Chinese rice. She had trouble placing me. At first, she was hesitant to accept it. It is hard to receive help when you have been self-sufficient your entire life. But when I said my children’s names, she took the food. I remember she told a neighbor that she hadn’t had Chinese rice in years and that it was delicious. For that reason alone, I cooked Chinese rice for her many a time, until I couldn’t because it was very expensive to prepare and donations to our charity were dwindling.

I continued to visit her once a week. She appeared more confident around me. She even asked me to help her with other things. Once she asked me to help her find a shirt for her granddaughter, for her school had resumed face-to-face activities. The girl, at 10 years old, was very tall. The previous school term had been on line because of the COVID-19 pandemic, and when they tried her the old school uniform shirt, it didn’t fit.

It wasn’t easy to find one. I would have offered to buy it for her, but I couldn’t because I am a university professor and, like the rest of the people in the group, I was going through tough times. But I finally found one: it was used but in good condition. When I presented her with the shirt, she smiled brightly back at me, as usual.

I needed to keep a record of our volunteer work, taking photos of those who received donations and filing the invoices for the purchases I made. Photographing Nora was almost impossible for me because it felt as if I was betraying her trust. I just took a couple of photos, and I don’t regret it.

Now I treasure those images.

We usually distribute our donations on Thursdays. If we are lucky to find fuel, we go by car; otherwise, we pack the meals in large bags on wheels and walk our way there. One morning in October 2021, as I got out of my car, I bumped into a neighbor of Nora’s that people called “La Morocha.” She was carrying a nebulizer. «Don’t go any further down this street; there is a lot of sick people here. Nora has The Disease. Give the food to me and I will take it to her,» she said.

It had been almost two years since the COVID-19 outbreak was first declared. I would deliver the donations right at the people’s doors, or I would distribute them on the streets, always outdoors. We would wear double face-masks, face shields, gloves, and we would constantly rub our hands together with alcohol-based sanitizer. But this time I froze. I stopped dead and I handed La Morocha the food.

I asked her what drugs Nora needed, in the hope of finding them among those we had already been donated. Apparently, given that she had shown no serious symptoms, a physician who lived down the block prescribed her ibuprofen and aspirin. And that was a red flag for me. We had had people with the virus at home, and my in-laws and a sister-in-law almost died of it, so I was familiar with the treatment protocol; that’s why I was surprised that, despite being a woman of advanced age, she had been ordered to take only ibuprofen and aspirin. So, the next day, I sent her a blood thinner we had received from the family of a COVID-19 patient who had died.

It felt good to be able to help her in whatever way, but word had it that she was deteriorating and that they had ordered other drugs.

Now they were in search of a medical oxygen tank.

I couldn’t find one.

I asked the few people I knew who had one at home, but they wouldn’t lend it to me because they were afraid they might need it later. Eventually, someone found one for Nora to use. Within a week, she showed a slight improvement. But shortly afterwards, some of her neighbors texted me telling me that they were taking her to the hospital.

In the span of a few hours, she died.

I have not been able to go back to her place to bring aid to her sister. I just paid my respects to her and her granddaughter at church. We did not distribute aid that week. Caridad Carúpano, the organization through which we handed out the donations we received, was mourning: it was the third person we had assisted who had died, and we felt as though we were failing to help them with our work.

I could not stop remembering the second to last time I went to take food to Nora, just one week before La Morocha stopped me on my way there. It was Nora’s sister who came out to meet me then.

Now I get it. Norita was already sick.

I wondered how she got infected with the virus. Did she refuse to get vaccinated? Didn’t she get the vaccine because she didn’t have someone to take her to a vaccination center? Why didn’t she ask me? Why didn’t I offer to take her?  Maybe it was fear, or misinformation, which didn’t allow her to see how necessary it was for her to do it.

Ultimately, I stopped asking myself all those questions, because I am certain that Nora is with God and with her daughter now. I am reassured that her granddaughter is under the care of her other grandparents, who had not been very close to her because they lived in another city. Before leaving, the little girl left her toys with La Morocha for her to give them to other kids. That made me very happy.

In the midst of mourning Nora’s death, I came to think that what we do is not enough. I got stuck and wouldn’t leave home. However, a few days later I ran into Pedrito, whom we assisted with our charity. Pedrito is blind and homeless. He was passing by the church and hollered:

“What happened to you that you didn’t come last week? I told the Bishop that you stood me up.”

That is when I realized that, however small, what we do can make a difference for the vulnerable.

And for that, I thank God.

This has made me understand that I must go on with my mission, even if sometimes impatience gets the better of me for not being able to do more.

Through It All, Yovanna Is Her Hope
Florelys Always Loved Running
Every So Often She Returns From Her Unresolved Journey into Oblivion
The War That Wouldn’t Let Me Get Home