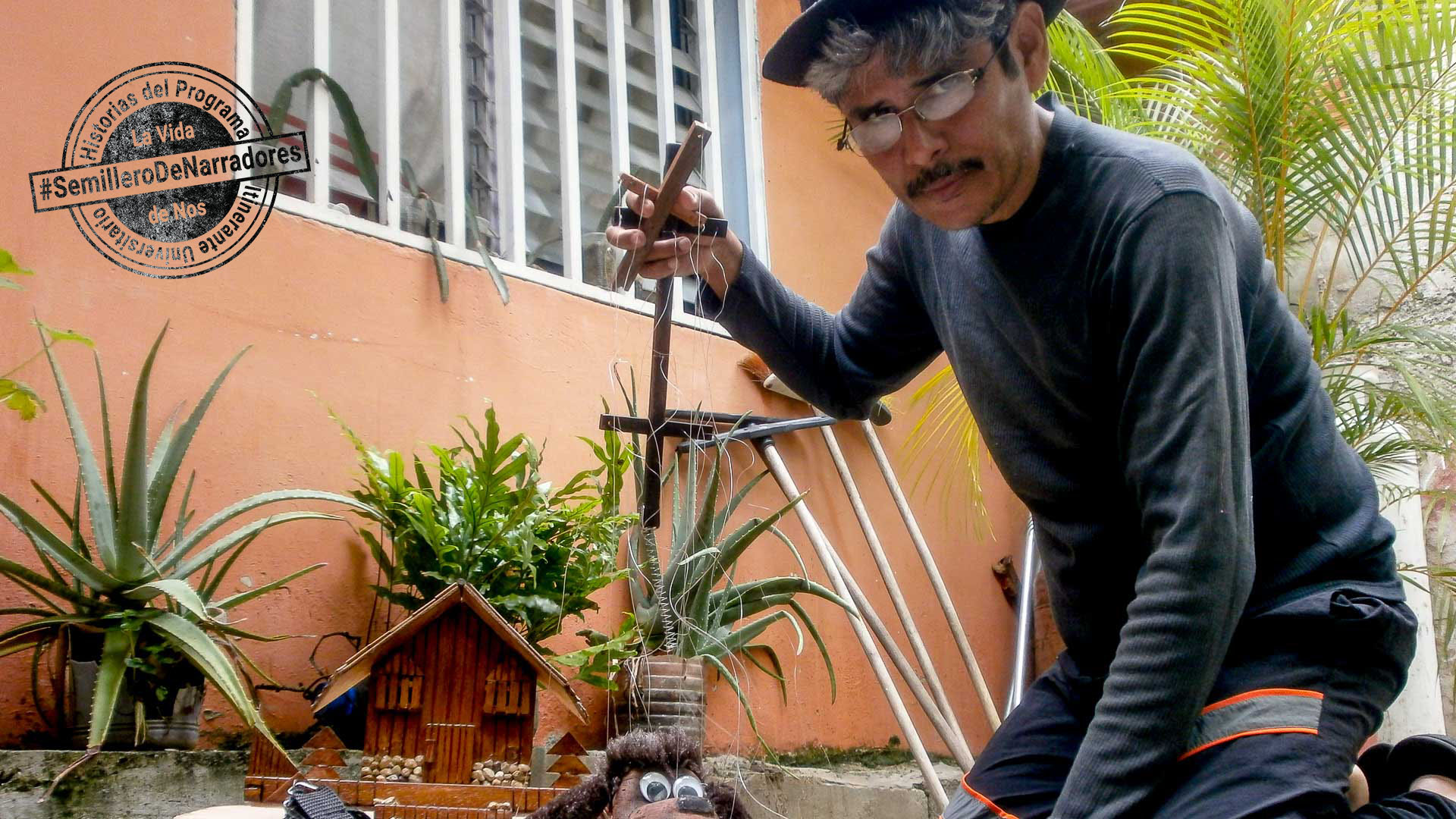 You Made Me Laugh. You Have Earned It.

José Gregorio Azuaje is a 59-year-old theater teacher in a school located in the Venezuelan Andes state of Trujillo. When school is out in the summer, he travels to Colombia to work with the puppets he makes himself from scratch. Up until now, he had managed to return to his country with some extra money on his pocket. But not the last time, when it proved a difficult task to accomplish.

The porch of José Gregorio Azuaje’s house is peaceful and clean and has pictures painted by his wife and daughter on its walls. It now serves as a shop, for the actual shop is filled to capacity with materials and puppets and there is virtually no space for him to work. Besides, there is natural light and a fresh cool breeze. José Gregorio sits on one of the wood furniture pieces and is set to paint a puppet that is about half finished. He takes the paints and brushes out of a wooden box, and then some time to look for a specific color at the bottom, under other jars.

José Gregorio paints and chats. At times, it seems as though he is not talking to me but to the doll that he is holding in his hands. It is as if he is telling her, not me, his own story.

His house is full of puppets. As you walk through the door, you can see puppets adorning a corner there, or sitting on some furniture in the living room, or on top of a shelf in the dining room. All the objects in his house have a special meaning for him or remind him of experiences he has had in the past. Such is the case of the tiny cactus gardens that his wife plants; or of the white coats, colorful wigs and red noses he keeps in a closet since Michel, his only daughter, now 23, migrated to Peru two years ago. It was with that outfit that the Azuaje-Terán family used to bring joy to the pediatric wing of the Dr. José Gregorio Hernández Hospital in the capital of their hometown state of Trujillo, in the Venezuelan Andes. But since their daughter left they have been so sad that they have not been able to resume the activity.

José Gregorio is 59 years old and has been working as an artist for 30 years. He is also a theater teacher in the Américo Briceño Valero school. His students and peers say that he is «a teacher by profession and a puppeteer by heart». He pursued a degree in education at the Universidad de Los Andes in Trujillo, majoring in language and literature.

“I discovered how to be a teacher through puppetry. It was with puppets and marionettes that I began to promote reading among my students.”

He talks about Danilo and Tierra, his favorite puppets, who accompanied him on his most recent trip to Colombia. As he says the names of these two characters, he stops painting, gets up, and goes into the house; he returns with the suitcases where he keeps them. He opens the cases and proudly shows the puppets to me.

José Gregorio received an invitation from the Teatro Manotas theatre group and from Pantaleón —a clown character played by his brother— to go to Cúcuta, Colombia, in early August of 2019. They invited him every year and it had become customary for him. He would work with the theater group for a few weeks.

The trip, he thought, could be an opportunity to earn make enough cash to buy much of what in Venezuela he finds difficult to purchase on his teacher’s salary, which is a mere four dollars a month. He would have to do as many performances as possible, of course, in addition to those that the Teatro Manotas had offered him.

Once in Cúcuta, José Gregorio was barely able to secure a couple of gigs in addition to the ones that he had previously scheduled. He realized that the city was crammed with Venezuelan artists. In fact, the owners of the theaters to which he submitted his portfolio would frown at him when they knew he was Venezuelan, because there were already many artists like him.

So he and some other partners decided to busk in the squares of Cúcuta; but things were not going as well as he had hoped. On the first day, he made about 18 dollars; then he made 15; the amount of cash that he could collect making his puppets dance was gradually decreasing.  It was barely enough to eat. The Teatro Manotas paid for his accommodation expenses, but he didn’t want to be a burden to them, much less so to his brother, who had already finished his own work.

He stayed in Cúcuta until August 25.

A few days before, he had met a mime from the Teatro Nacional Juvenil de Valera youth theater in Venezuela who was bound for Bogotá. The mime proposed that they go deeper into Colombia and visit other cities. So he packed his bags and headed to Bucaramanga in a 121-mile, 6-hour ride. Borpli and Terry, two other clowns from Trujillo with whom he was very close friends and had shared life and artistic experiences, were waiting for him.

They helped him find a hotel and food. They also offered him some advice: “Don’t go to the northern part of the city; it is too dangerous.” He took their words very seriously and was not even curious to see that part of Bucaramanga.  He found a slot to perform his 30-minute play entitled El principio visto desde una raiz roja (The Beginning as Seen from a Red Nose) at the Eleventh International Circus Festival, where he got one of the highest pays of his trip: about 80 dollars.

That day he made friends with Argentinean and Chilean theatre fellows and with artists from other countries. When he shares his experience, there is a certain sparkle in his eyes, as if he wanted to live it all over again.

However, the next day he had to keep looking for work.

Parks in Bucaramanga, though heavily frequented, were not a good place to perform. At one point, he saw a woman get mugged in one of said parks, after which he began to reconsider his decision to go to that city.

The only way for him to make some money was hacienda faro, that is, performing his routines at traffic lights. He would hang a speaker on his chest that played the music that Danilo or Tierra danced and carefully counted the seconds that he had before the lights changed, the streets bustling with drivers honking their horns, under a scorching sun.

It was a 30-second performance, followed by 15 seconds to walk through the cars and thank the audience, hearing the coins clink as they were dropped into his hat.

His preferred traffic light to work was the one on the Puente de la Novena, south of the city, which was traveled by residents of nearby upper-class communities. He had to be at the spot at 6:00 in the morning if he wanted to «claim ownership of the place» and be in a position to decide with whom he would share it. But sometimes things didn’t go as planned and he had to walk up and down the streets to find a traffic light with an «owner» who would be willing to share it with him, or one further away but free.

One day he changed the dance style of his puppets to appeal to the people in Colombia: in just one night, Danilo had to learn to dance salsa, because that is a very popular genre in the area. But it wasTierra that delivered the most fun, to the point that people whistled and applauded her from their cars and called her «Shakira».

It was September already.

It was mostly the tourists and the pedestrians who enjoyed the show and tipped José Gregorio. He would perform until 5:00 p.m., collecting coins through motorcycles and cars.

The coin that he found the hardest to receive was one of 500 pesos (USD 0.15) that was offered to him by a homeless woman.

“I cannot possibly accept it. You may need it more than I do. Use it to buy bread.”

“No. You made me laugh. You’ve earned it,» the woman insisted, a smile on her face.

To make someone who was obviously having a difficult time laugh made him feel good about his work, even under the circumstances.

In between breaks, people would always give him water or lunch, which he found encouraging and kept him going. He made about 30 dollars a day in Bucaramanga. He could earn twice as much if he performed in a theater, but there were no more slots available and they were not taking in more Venezuelans, they said.

Although he was busy all day, surrounded by fellow artists and friends, he made the decision to go back to Venezuela. He left Bucaramanga on September 23 and arrived in Trujillo two days later from a trip of almost a month and a half to Colombia.

He could have stayed a little longer, but he was on the eve of his wedding anniversary. In the 26 years that they have been together, he has never been away from his wife Yamilet on such an important date. Besides, the school vacations would soon be over and he was expected to resume his teaching activities. Yamilet feared that José Gregorio would not arrive on time, particularly because of the news on the TV about the border and the rumors of a possible closure thereof. But he did make it, albeit with a little less money that he had earned because he had to pay an overweight baggage fee for his puppets’ cases, as if he was traveling by plane.

In his opinion, the work had not been that demanding in Bucaramanga, although he had hoped to find more opportunities there. What he cherished the most was the friendly and welcoming spirit of its people.

His venturing out into such unsafe streets made José Gregorio overcome many of his fears and gain more confidence in himself.

In the small porch-shop of the house in Trujillo, Danilo and Tierra (the so-called Shakira) show me the new dance style that they learned in Colombia. The puppeteer smiles and the puppets move to the rhythm, playfully.

There are very few shows today in José Gregorio’s agenda. That is why he wants to go back to Colombia. Only this time his trip will have a different purpose as he will not just focus on making cash during the summer vacations and then return to Venezuela: he will try to reunite with his daughter and stay with her. He is confident that his performances will allow him to earn enough money to travel across cities and countries until he finally gets to Peru to be with his wife and his dogs Hachito and Bombón.

He knows that it will be very hard for him to say goodbye to his school, his students, his mother’s house, and the town where he was raised. But he also knows that the joy that awaits him at the end of his journey will have been worth the effort. He tells me so as he pulls the strings that control Danilo, whom he makes walk around the small shop:

“You have to step out of your comfort zone to go out there and fight for your dreams.”